10 of England's Most Heartbreaking Moments in International Football

The Red Roses went down 32-12 at the Yokohama International Stadium on Saturday, and that's all we're going to say about that. Best not to dwell on the past, right? Good, now we can move on from that heartbreak...and dwell on some other heartbreaking times in England's sporting past...

Here's a look back at ten of the most agonising moments for the nation's footballers.

Paul Gascoigne had been instrumental in the Three Lions' run to the semis at Italia '90, with the playmaker equally brilliant during the first 90 minutes of the last-four showdown with West Germany.

Franz Beckenbauer's side were hugely fortunate to get a 1-1 draw in normal time, a deflected Andreas Brehme free-kick getting them on the scoresheet. However, they took control in the additional 30 as Gazza lost his cool following a harsh booking for a lunge on Thomas Berthold.

That yellow meant the midfielder would be suspended for the next match, ending his tournament in devastating fashion. Of course, the misery was not complete - the Germans just had to go and win the penalty shootout. Once again, England made their exit on spot-kicks and, once again, it was Die Mannschaft who booted them out, though this time there was the added pain of being eliminated in front of their own supporters.

As hosts of Euro '96, the nation was roaring their side on, yet the German fans were the only ones making noise when Gareth Southgate - the sixth penalty-taker - saw his attempt pushed away by Andreas Kopke.

After so much hope and joy, that cruel defeat left an empty feeling for Englishmen everywhere.

It's Not Coming Home 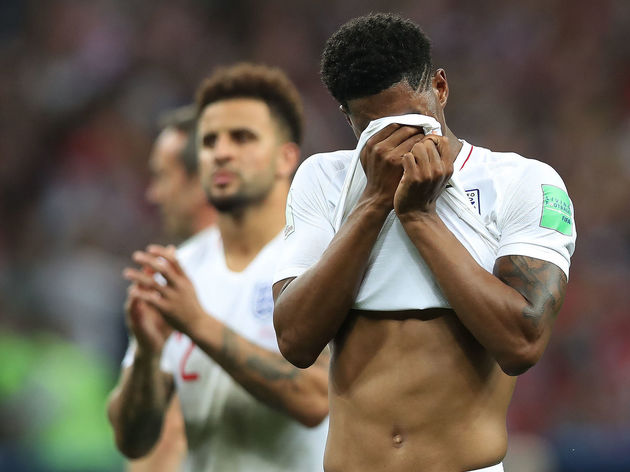 It was during that summer of 1996 when the chant 'It's Coming Home' was first heard on these shores. 22 years later, it became the anthem for the Three Lions' revival under Southgate.

We all believed it genuinely was about to come home following Kieran Trippier's mesmerising opener versus Croatia in the last-four.

Then Ivan Perisic and Mario Mandzukic brought an abrupt end to the singing as England fell in their first World Cup semi since the days of Gazza.

The Hand of God Sometimes, you have to hold your hands up and admit you lost fair and square. This was not one of those times.

Leaping to meet the ball before opposition 'keeper Peter Shilton, Argentina's Diego Maradona punched it over him and into an empty net, triggering a fightback from

Frank Lampard lobs the ball over Manuel Neuer and seemingly puts England on level terms against Germany however, the goal isn't given  pic.twitter.com/rk7JuanwGg

Officially, Frank Lampard has never scored a goal at a World Cup - he has some legitimate grievances about that unwanted record.

The ​Chelsea hero looked to have levelled the game at two-apiece in the last-16 meeting against Germany, sending a trademark long-range effort crashing in off the underside of the crossbar.

Astonishingly, neither the referee nor his assistants saw the ball bounce down approximately 250 metres behind the line. England's morale took a sizeable hit and Thomas Muller punished them, netting twice in a 4-1 hammering.

Bassett Puts Through Her Own Net The Lionesses were on the brink of reaching a maiden World Cup final appearance in 2015, going toe-to-toe with a superior Japan side in the semis.

At 1-1 and with the clock turning red, the game looked to be going the distance, only for defender Laura Bassett to score a freakish own-goal in the second minute of stoppage-time.

Mark Sampson's recruits had to settle for Bronze in Canada and are still awaiting that elusive gold.

The Circus Clown in Gloves Working as a pundit on the night, Brian Clough called Poland shot-stopper ​as quoted by ​BBC England may have trounced Bulgaria 6-0 in October, but the real story was the horrific racist abuse received by a number of the visiting players in Sofia.

At one moment, cameras focused in on debutante Tyrone Mings remonstrating with the linesman, asking whether he had heard the vile chants being aimed at him and his fellow Englishmen.

It was a terrible stain on what should have been a wonderful night in the 26-year-old's career. Sol Campbell appeared to have won the game for his country and a place in the 2004 European Championship semi-finals when he rose like a salmon to nod home a last-gasp goal against hosts Portugal.

However, his wild celebrations were cut short by the officials, just like they had been at France '98 following a final-minute header versus Argentina.

David Beckham and Darius Vassell missed from the spot as England were the victims of yet more shootout heartbreak.

A Haunting Moment for Houghton

What a game ! but it just wasn't to be for the Lionessess as USA keeper Alyssa Naeher saves a Steph Houghton penalty to deny an equaliser #Lionessess #WomensWorldCup pic.twitter.com/B9NCdyO30C

It seems England have penalty issues in normal time, as well.

Phil Neville had led the Lionesses to a semi-final showdown with overwhelming favourites USA in France last summer, inspiring young girls and boys across the nation with a captivating march to the latter stages of the tournament.

It was as though the footballing gods were playing some twisted joke on captain and star performer Steph Houghton when she missed a late penalty to tie the game, with that the Lionesses' last chance as they fell to a 2-1 loss at the hands of the eventual champions.