The Toffees made their way into the quarter-final on Tuesday evening, after a 2-0 victory over Watford at Goodison Park. Marco Silva's side were able to put their perilous league form behind them, and will meet Leicester in the next round.

Everton currently sit in 16th place in the Premier League, only two points above the drop, and talks of crisis are beginning to grow around the club. A visit from last year's Champions League finalists, in spite of Tottenham's recent questionable performances, is anything but easy for them. The visitors will also be hoping to regain some league form, facing another trip to Merseyside, where they lost to league leaders Liverpool last weekend.

Spurs will be fully rested, having a clear schedule midweek following their shock Carabao Cup exit to Colchester in the previous round. Mauricio Pochettino will be aiming to guide them to their first league victory in over a month, and a much needed away win.

​​Everton are still without Jean-Philipe Gbamin and Bernard, who will both most likely be on the sidelines for some time. These two Premier League mainstays have faced each other on a whopping 177 occasions in all competitions, with ​Tottenham having come out on top with 67 wins to Everton's 55.​

Everton have struggled in this fixture in recent years having not beaten Spurs in seven years, the last victory a 2-1 win in December 2012. 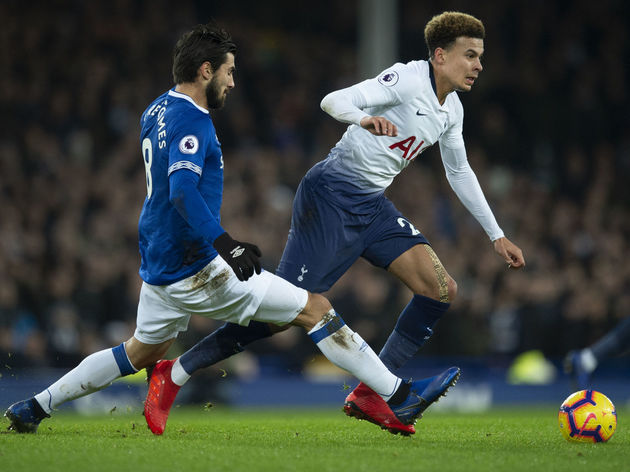 The last time the north London outfit visited this area of Merseyside, they were emphatic victors beating the Toffees 6-2, including a brace from both ​Son Heung-min and ​Harry Kane.

Everton have struggled in the league of late, most recently losing 3-2 to ​Brighton courtesy of a 94th minute own goal.

More worryingly, Sunday's hosts have lost five of their last six ​Premier League games, results which have left them in 16th place and two points above the relegation zone.

Marco Silva is under huge pressure at the moment as results and performances have been far from desirable, especially given the enormous funds the Everton boss had to work with over the summer.​ Tottenham also find themselves in a spot of hot bother, currently sat in 11th place, eight points adrift of the top four.

Spurs have won only one of their last five league matches, most recently throwing away a lead against Everton's bitter rivals ​Liverpool last weekend.

Here is how both sides got on in their last five fixtures:

It seems nearly impossible to predict which version of these two teams will appear on Sunday, and, it feels as if either side could claim three points.​

Everton don't tend to do draws, in fact they haven't finished level with a team since the opening day of the season in a 0-0 draw with ​Crystal Palace.​

The Toffees are much stronger at Goodison Park than on the road this season, and they sit in seventh based on league position at home. However, they are more than capable of slipping up, as was shown 21 September in a 2-0 defeat to ​Sheffield United (with the Blades having only one shot on target). It feels as if the tide must turn sooner or later for Spurs, who are playing a great deal worse than the sum of their parts. A fixture in which they are so superior in recent history may be exactly what Mauricio Pochettino needs.

Spurs' performance last weekend, in a replay of last year's Champions League final, was far better than what supporters have had to endure in the weeks prior, however, it was still a far cry from what many expect from Sunday's visitors.