The Red Devils started slowly but grew into the game and won a penalty just as the tide began to turn in their favour, courtesy of some naive defending from Marcos Alonso. The

Rashford might have missed one at the weekend, but he confidently tucked this one away as Willy Caballero dived to the the wrong side of his goal.

A different Chelsea emerged for the second half, one with purpose, desire and energy - typified by

Manchester United were back in front on 73 minutes, Rashford unleashing a spectacular free kick from distance which moved in the air multiple times on its way to the back of Chelsea's net. Ole Gunnar Solskjaer's team then held on in an open end to the game to reach the next round of the competition.

Michy Batshuayi with a beauty! 

It was a tale of two ​Chelsea's on Wednesday evening, the one that laboured in the first half and the XI full of energy and purpose in an open second 45 minutes. In honesty, this was a reflection that Frank Lampard got his team selection and shape wrong on the night.

As good as Christian Pulisic was at Burnley, he has hardly featured this season and looks like he might require more game time before he shows the same influence against better opposition. This also meant that Callum Hudson-Odoi was shunted over to the right and neither thrived against their opponent's wing-backs. 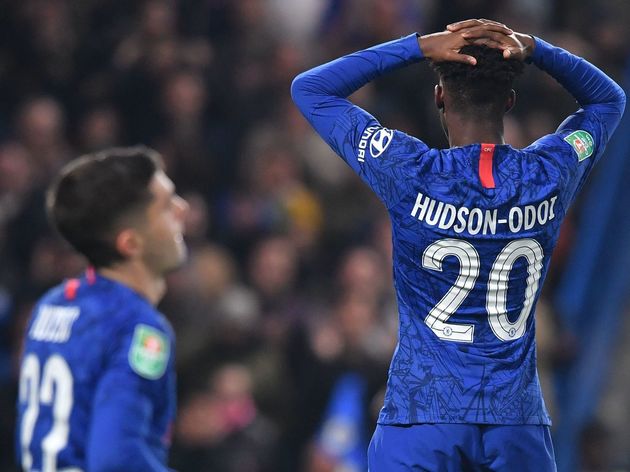 There was also the issue of young Billy Gilmour being the most creative midfielder alongside two functional counterparts and Chelsea struggled to get a grip in the centre of the pitch.

Gilmour will certainly benefit from the minutes and improved in the second half, but Lampard's decision meant that when Mason Mount and Pedro entered from the bench United were already well on top.

A tough decision given that there were no standout performers in the Chelsea side, but Jorginho quietly went about his business on a night when he captained the Blues.

It capped a remarkable transformation from Maurizio Sarri's on-pitch general and lightning rod for criticism, to key player who heard the fans singing his name in full voice. He tried to set the tempo early on by intercepting Marcus Rashford as United sprung a counter attack and made a crucial second-half tackle as Jesse Lingard shaped to shoot. He tried to pull the strings from deep and influence the game while Manchester United won the midfield battle, but he put in a real shift and covered a lot of ground in order for Gilmour and then Mount to move closer to the front three in the second half.

Ole Gunnar Solskjaer now has a system for these bigger games and it's starting to work. It might be somewhere between bus parking and paint drying, but it covers for all the deficiencies in ​Manchester United's squad.

Defensive pairings have been a problem for the Red Devils for a while now, but a back three hasn't just made them more solid it lifted the load on Scott McTominay and Fred's shoulders at Stamford Bridge. Without constantly worrying about protecting what's behind them they've fixed that neck ache and starting looking forward, imposing themselves on the Chelsea midfield.

Ole is winning the tactical battle here,his 3 at the back,5 in the middle is working to perfection. Its stifling Chelsea wingers,pinning the fullbacks to their half,forced Alonso to make that mistake. #CHEMUN #CarabaoCup

The wing backs set the tone by disrupting Chelsea in wide areas, which meant James, ​Rashford and Lingard could focus on pressing their opposing centre halves and causing counter-attacking damage. It's no coincidence that they've won so many recent penalties.

The system stopped working as Chelsea's second-half influence grew, but credit to Solskjaer who tinkered at the right time. Victor Lindelof was removed in the 66th minute as they switched to a back four and once again there was an attacking presence as they stemmed the Blue tide.

What a difference a few weeks makes. It wasn't long ago that Marcus Rashford seemed devoid of confidence and in dire need of a rest from first-team action. It's just not in his nature to go hiding and credit to him for playing through what seemed like a rough patch.

After missing a penalty against Norwich just four days ago, he stepped up to the spot to convert in composed fashion. Then there was the small matter of an absolutely sublime free-kick to restored the Red Devils' lead.

Rashford offered so much more than goals on the evening though, his tireless effort was integral to the two systems United used on the night. Alongside James he was crucial to his team's pressing and countering, and after shifting to the left of a 4-2-3-1 he helped nullify Chelsea's marauding wide players before being replaced by Ashley Young.

Chelsea's Champions League tie with Ajax next Tuesday is sandwiched between Premier League fixtures against Watford and Crystal Palace. Frank Lampard then faces one of his toughest challenges in the Blues' hotseat, a visit to the Etihad to face Pep Guardiola's Manchester City.

Manchester United visit Bournemouth in the Premier League this weekend, before an Old Trafford double-header against Partizan Belgrade in the Europa League and Brighton domestically.