Watford are still looking for their first three points of the season after a goalless draw at Vicarage Road with Bournemouth.

The game started at a frantic pace with both sides hitting the woodwork in the opening 15 minutes. Gerard Deulofeu struck the post directly from a corner, while ​Steve Cook headed onto the bar when he possibly should've done better.

​Bournemouth were on top for much of the second half and Ben Foster had to be on top form to keep them out. Superb saves to stop both Diego Rico and Arnaut Danjuma ensured Watford survived the first half and came into half time at 0-0.

The second half started slowly and Quique Sanchez Flores went in search of an opener by bringing on Andre Gray for Nathaniel Chalobah. However, both teams continued to struggle going forward with the defences being well on top.

Both teams pushed for a winner and Aaron Ramsdale produced a fantastic save to keep out a wonderful effort from Will Hughes.

Watford went in search of their first win of the Premier League season as they looked to build on an impressive 1-1 draw at Tottenham last weekend. Ben Foster had to be on top of his game to ensure the Hornets didn't fall behind in the first half. 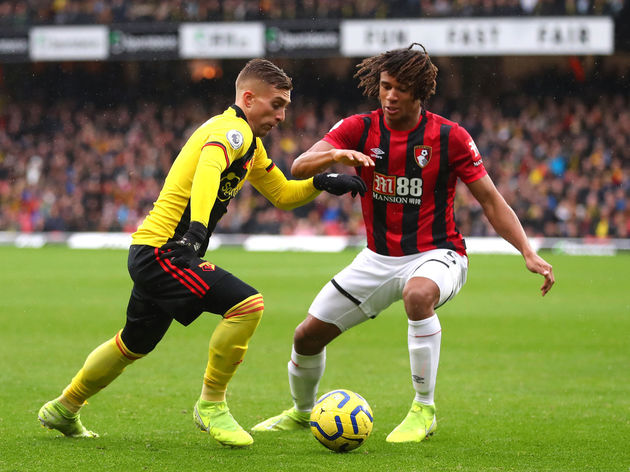 They defended stoically but lacked any serious threat going forward. ​Troy Deeney is evidently a big miss for the Hertfordshire club both on and off the field as Deulofeu and Pereyra can't lead a Premier League attack on their own.

He is expected to return in the coming weeks - and, boy, do the Premier League's bottom club need their captain back in the side.

Watford have yet to win a single Premier League game this season.

Ben Foster has been under fire all season and it isn't an envious position, being in goal for the Premier League's current worst defence. He proved that, at 36 years old, the former Manchester United stopper certainly still has it. Great saves in the first half from Rico and Danjuma kept Watford in the game.

Watford looked relatively inept going forward with Deulofeu trying all sorts of tricks to try and get Watford the lead. But, it was Foster's performance that kept the score at 0-0 and made sure Watford got at least a point from the fixture.

Bournemouth game into the game looking to get back on track in the ​Premier League following an inconsistent run of form with no wins in their last three. Their back four were as solid as ever and limited Watford to very few clear cut chances. This defensive rearguard was needed as they kept their second clean sheet of the season - with their first one only coming last weekend against Norwich.

This was one of the best performances from the Spaniard in a Bournemouth shirt, as he made himself a menace down the left-hand side. Rico looked dangerous going forward and forced Daryl Janmaat to be on top form to limit the chances he was able to make. He, also, looked solid at the back along with the other three Bournemouth defenders as they kept Deulofeu and Pereyra quiet for the majority of the game.

Diego Rico's best half in a Bournemouth shirt #afcb

Honourable mention goes out to Ramsdale who pulled off some good saves to keep Watford at bay.

Watford host Chelsea next weekend in Saturday's late game as they look to secure their first win of the season. Captain Troy Deeney won't be too far from fitness so it may be a boost for the Hornets.

Meanwhile, Bournemouth, on the other hand, kick-start next weekend's football as Manchester United travel to the seaside.​ They will want to get their first win in five as they attempt to climb further up into the top half of the Premier League.