Schalke and Borussia Dortmund played out a pulsating draw in the Revierderby on Saturday, as the hosts had much the better opportunities to no avail over a difficult 90 minutes for both sides.

Defender Salif Sané rattled the underside of the crossbar with a thundering header just before the half-hour mark for the hosts, but the ball somehow stayed out of the Dortmund goal. Suat Serdar then missed a glorious chance, hitting the inside of the post when the German had the entire goal to aim at. Schalke continued to push the away side deeper into their own half, and it was only towards the latter stages of the contest that Dortmund began to create chances of their own.

Ultimately, the two sides cancelled each other out and although the hosts shaded the match, the spoils were shared between the two rivals.

Missed chances were the order of the day for ​Schalke on Saturday afternoon. Borussia Dortmund may not be the most defensively stable side in the Bundesliga, but when presented with gilt-edged chances against any team, you must take them.

The hosts blew two wonderful opportunities to take control of the game in the first half, as the woodwork came to Der BVB's rescue on both occasions.

Schalke's first real chance fell to centre-back Sané, who, having found himself unmarked in the opposition's box, crashed a powerful headed effort against the underside of the bar, and the ball ricocheted away to Dortmund's relief. Serdar found himself in acres of space in the Dortmund area soon after, and despite having an eternity to pick his spot, the 22-year-old blasted the ball against the woodwork.

This Schalke team may only be a prolific forward away from competing at the very top of German football once again - providing they hold onto their most valuable assets, that is.

STAR MAN - Schalke have an absolute gem on their hands, and they'll be desperate to keep him out of Bayern Munich's clutches. Morocco international Amine Harit is a wonderful player to watch, a live-wire with the ball and a constant nuisance without it. ​Despite ​Dortmund's heartbreaking end to last season, there was growing optimism around the club that this group of young players could kick on and go the distance in this year's title race. It's safe to say, Favre's men have looked truly underwhelming during the opening months of the new season. 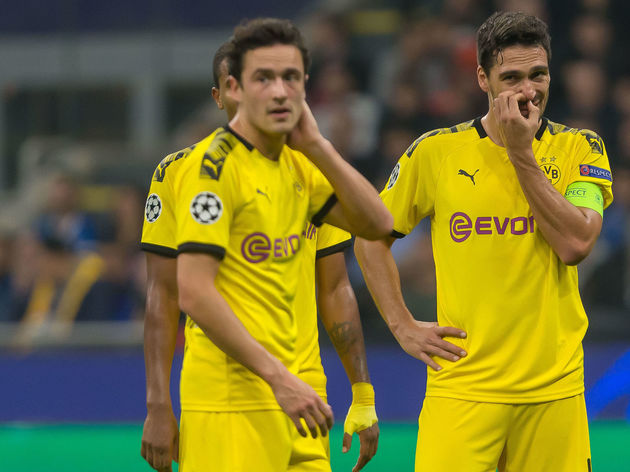 Last season's swashbuckling swagger has been replaced with a disjointed, timid uncertainty, and defensively Dortmund are all over the place. Their backline looks like a group of men that only met each other just before kick-off, and the midfield regularly gets overrun and bullied against the best teams.

A derby match is always an intimidating situation for any away side, but Dortmund were visibly nervous and edgy over the 90 minutes. Despite their impressive recruitment over the summer, the side still lacks character.

Food for thought for the Dortmund boss.

STAR MAN -​ If only we could give the 'star man' award to the woodwork. Unfortunately, we can't, so Jadon Sancho pips the rest to the post for the award.

Dortmund lacked serious cohesion going forward, and looked incredibly shaky at the back. However, anything positive that the German side created, was all down to Sancho. The England international took matters into his own hands, picking up the ball and frightening Schalke with his direct running. He came extremely close to breaking the deadlock in both halves with wicked curling efforts, but the youngster's luck was out for the time being.

If Dortmund's slump continues, Sancho won't be sticking around for much longer.

Schalke follow up their crunch derby with a cup match away at Arminia Bielefield and then travel to Augsburg on Sunday evening to continue their good start to the season.

Dortmund host Borussia Monchengladbach on Tuesday evening in the domestic cup, before entertaining Wolfsburg in a top-of-the-table clash for Favre's men.