5 Reasons Why Leicester Are Genuine Title Challengers This Season (Really)

​​Leicester's 9-0 win over Southampton broke all sort of Premier League records but the main takeaway from the Saints' Black Friday is that the Foxes are quite possibly actual title challengers this season.

Leicester's battering of Southampton moved them into second place (well, temporarily), while they also have more points at this stage of the season than they did in 2015/16 under Claudio Ranieri. It seems quite mad, but there seems no reason why they can't continue their form to push for a top-four spot this season and just maybe even be the one team to challenge Liverpool and Man City for the title itself.

Here are five reasons why Leicester shocking the world again is far from a 5,000-1 shot... Leicester are unbeaten at home this season and that doesn't seem like changing anytime soon.

Having played five games at the King Power stadium this season, the Foxes have won four and drawn only their opener against Wolves. This includes a fantastic 5-0 win over Newcastle and impressive 2-1 comeback against Champions League finalists Tottenham.

Since Brendan Rodgers took charge last February, the Foxes have lost just once at home.

Friday night's away win was the largest away victory in ​Premier League history - but this isn't the only time Leicester have absolutely destroyed an opponent this season.

In 10 games, they have scored 25 goals, which is only bettered by Premier League holders Manchester City.

After his hat-trick, ​Jamie Vardy now tops the Premier League goalscoring charts with nine. While he doesn't have Riyad Mahrez for support this time around, the Foxes have creative potential in abundance from James Maddison, Ayoze Perez, Harvey Barnes and Youri Tielemans. Harry Maguire's £80m move to Manchester United was the most any club has ever paid for a defender surpassing Virgil Van Dijk's move to ​Liverpool.

Many questions were asked when Leicester didn't sign a replacement but fans needn't have worried with the able replacement coming in the form of Caglar Soyuncu.

The Turkey international who went under the radar in a difficult first season in England has come to the fore under Rodgers and has been better in almost every department than Maguire this season - with more blocks, interceptions, tackles and clearances. 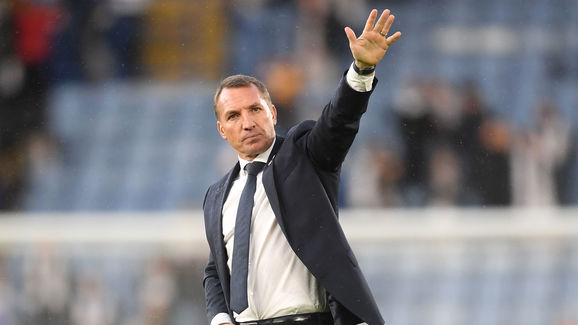 There are comparisons that can be made between the 2013/14 Liverpool side that went so close to Premier League glory and this Leicester team. It may be outlandish to say that after only 10 games - but it can't go unnoticed.

The front three last night of Perez, Vardy and Barnes looked almost as fluid as Liverpool's famed front three of Raheem Sterling, Luiz Suarez and Daniel Sturridge from that season.

The attacking system worked for Liverpool as they came close to winning their first league title and Brendan's tactics and winning mentality, further honed in Scotland with Celtic, are working again.

Best Midfield in the League It's a big claim but Leicester may well have the best midfield three in the whole of the Premier League right now.

Wilfred Ndidi does the dirty work for the team but still does it with poise and guile. Comparing him to his counterparts Fabinho and Rodri, he has more interceptions, blocks, tackles and clearances. He also offers more going forward chipping in with two goals during the season.

Tielemans too looks like an absolute steal for the Foxes, as he's proved just how good he is. The Belgian has been involved in five goals this season with three goals and two assists. He's the perfect box-to-box midfielder and Rodgers' system has allowed him to develop and become one of the best midfielders in the league.

A second double-digit score of the season for Youri Tielemans in #SOULEI.

He now has 20 #FPL points in the last 2 GWs. With 4.9% ownership is a strong differential  pic.twitter.com/rAhigA8bvR

Similar to his Belgian teammate, Manchester United-linked Maddison has been involved in five goals this season, scoring three. He appears the perfect playmaker to sit in behind the impressive front three.

If these three can maintain their early season form, they could become as iconic as the N'golo Kante-Danny Drinkwater partnership that drove Leicester towards that famous Premier League win.