The Manchester United XI That Should Start Against Norwich City

Ole Gunnar Solskjaer will be without as many as six first-team regulars for the contest though, with Paul Pogba, Luke Shaw and Axel Tuanzebe among those who are not quite ready for a return just yet.

In more positive news, United finally ended their 12-match winless away run which had stretched back to March - when they defeated Partizan Belgrade on Thursday night in the Europa League - thanks to an Anthony Martial penalty. 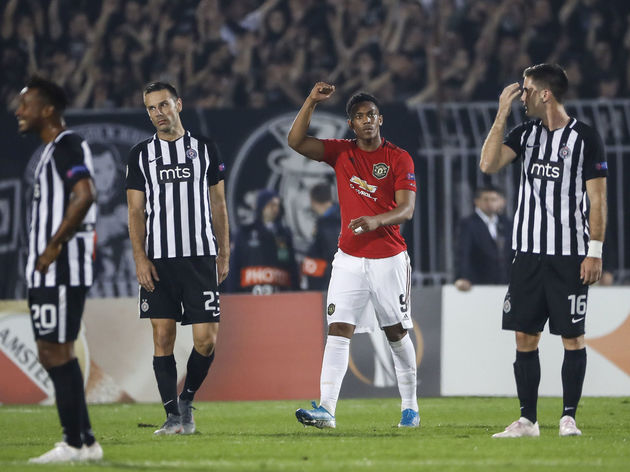 This is something Solskjaer will look to build on when they face Norwich in the Premier League, who themselves are struggling having lost 5-1 at home last time out against Aston Villa. A win on Sunday is a must as United currently sit 14th in the table on ten points which is far from acceptable.

With Manchester United moving to a 3-5-2 formation in recent games, here is the side the Red Devils should go with when they take on the ​Canaries this weekend. David de Gea (GK) - The Spaniard has been Man Utd’s best player over the last five years and has started the season reasonably well, keeping three clean sheets in ten games in all competitions, with United holding the fourth-best defensive record in the Premier League largely due to De Gea’s performances.

Aaron Wan-Bissaka (RWB) – Since returning from injury against Liverpool last weekend, Wan-Bissaka has put in two assured displays. The defender has made a really good start to his United career, despite the pressure of an inflated price tag, and his return is a big boost for Solskjaer.

Victor Lindelof (CB) – The Sweden international improved last term in his second season at the club, becoming United’s most consistent defender. However, he has struggled at times this season but will start on Sunday regardless as he is still one of the best options (from a limited pool) they have at the back. Harry Maguire (CB) – Number one centre-back for club and country, Maguire has had a solid start to his career at Old Trafford. However, whilst his performances have been good, he will need to start to become a real leader if they are to climb the table.

Marcos Rojo (CB) – With Solskjaer opting to go with three centre-backs, Rojo is likely to start alongside Maguire and Lindelof. This is due to Tuanzebe being injured and the Argentine playing well in the Europa League games this term, meaning he should get the nod ahead of Phil Jones.

Ashley Young (LWB) – With Luke Shaw injured and youngster Brandon Williams likely to be rested after playing against Partizan, club captain Young is likely to start at left wing back against Norwich. Scott McTominay (CM) – McTominay has enjoyed a good season so far and has probably been one of United’s standout players in what has been a really poor side. The Scotland international is a hard worker whose passing ability has improved in recent months.

Fred (CM) – The Brazilian has struggled since his arrival from Shakhtar Donetsk in 2018 but with both Pogba and Nemanja Matic out injured, the midfielder is set to make his sixth Premier League appearance of the season on Sunday. Daniel James (RW) – Pace, agility and energy - three words that sum up James' game. The Welsh star has been brilliant since his arrival and will look to add to his three ​Premier League goals and hurt the Canaries with his speed on Sunday.

Marcus Rashford (ST) – His first-half strike against Liverpool will have given the 21-year-old confidence after struggling in the early months of the current campaign. If Rashford can get his head up more and improve his decision making in the final third, then United will climb the table.

Anthony Martial (LW) – After missing a large part of the season through injury, Martial’s return to the side improves the team massively, with the attacker one of the few players in the squad with world-class quality.