José Mourinho was spotted in the Emirates crowd on Thursday night, as ​Arsenal beat Vitória 3-2 in the Europa League thanks to a late Nicolas Pepe brace.

Unai Emery's team had to come from behind twice to beat a winless Vitória team to ensure they remained flawless in Group F of the Europa League. However, fans still used the occasion to fire vitriol at the former Sevilla boss – and the presence of a top manager in the crowd will not have helped him sleep any easier. 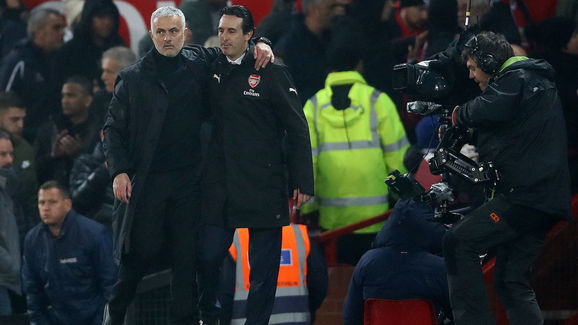 Arsenal continued to look flaky at the back and conceded after only eight minutes on Thursday, ​ needing a brace of excellent free kicks from summer signing Nicolas Pepe to rescue three points at the death.

TV cameras didn't pick up Mourinho in the crowd but he was spotted in an executive box by fans as he watched the north London side host a team from his native Portugal.

Mourinho has been one of the name touted by both fans and pundits as Emery's successor if the Spaniard was to be axed by the Gunners. The Portuguese manager has been out of a managerial job for almost a year, having been sacked by ​Manchester United after winning only seven of their opening 17 games last season.

Arsenal fans reacted, of course, with their usual decorum.

Jose Mourinho was live in the flesh at The Emirates for Arsenal’s Europa League match against Vitoria SC last night with Raul Sanllehi by the looks of it.

Jose Mourinho in my eyes is one of the best coaches in the history of the game. Serial Winner that wants Passion & FIGHT from his players. Would I take him at Arsenal? Without a doubt 路‍♂️

Huge myth that Mourinho parks the bus 24/7. He only did vs Top 6 sides and it worked at times; 3-1 Arsenal, 3-1 vs Liverpool, 3-2 vs City. Difference is, Emery is negative to no avail while Jose can play negative but is a winner. Emery has a small mentality vs relegation fodder.

100% behind Mourinho Project. Here is why...we have a reputation for being weak mentally and defensively these are the core strengths of a Mourinho team him coming in would change that perception of Arsenal and we can build on from there.

It would undoubtedly be one of the biggest stories in football if Mourinho was to take the job at the Emirates, taking over after a plethora of well-publicised spats with Gunners legend Arsene Wenger in his earlier spells managing Chelsea.