After a potential move to Spurs fell through in the summer - a thought that gives Spurs fans nightmares (*image rights*) - Paulo Dybala has got off to a promising start under Maurizio Sarri in Turin.

When he first arrived in Turin way back in 2015, Dybala quickly became a prominent member of Massimiliano Allegri's side, contributing to 29 goals in his maiden season at the Old Lady as Juve won the domestic treble.

In two of his first three seasons, Dybala was the club's leading scorer - netting 19 in 2015/16 and 22 in 2017/18. The Argentine thrived in his unique second-striker role, playing off the shoulder of first Alvaro Morata and then Gonzalo Higuain

In what was a great Juventus team, Dybala was the man that everybody wanted to see - his flair, vision, creativity and rolled-down socks were unlike many players in Europe. However, the summer of 2018 was a turning point for the then 24-year-old, who was touted as being Lionel Messi's heir to the throne.

That summer, out went Dybala's pal Gonzalo to Milan and in came some fella called Cristiano.

In Dybala's first three years at the club, Allegri deployed a 3-5-2 and then a 4-2-3-1 with the Argentine given the luxury of being the free-roaming second striker. Essentially, the role gave Dybala the freedom to do what he wanted as he popped up all over the pitch to try and affect play. While Giorgio Chiellini, Leonardo Bonucci and Andrea Barzagli were three titanium walls and Paul Pogba Last season, Allegri switched to a 4-3-3 - in some instances he'd use a 4-4-2 - as CR7 became the main man in Turin. Dybala was merely another spoke in the wheel.

The 2018/19 campaign season was his least productive yet as he was often utilised as a right-winger - eight Serie A goals and assists was his worst return since his Serie B days back at Palermo. Even when Allegri used him more centrally, we never saw the same Dybala last season - other than mere flashes of genius that reminded us all of his supreme talent.

However, the appointment of Maurizio Sarri, who was so successful with Napoli 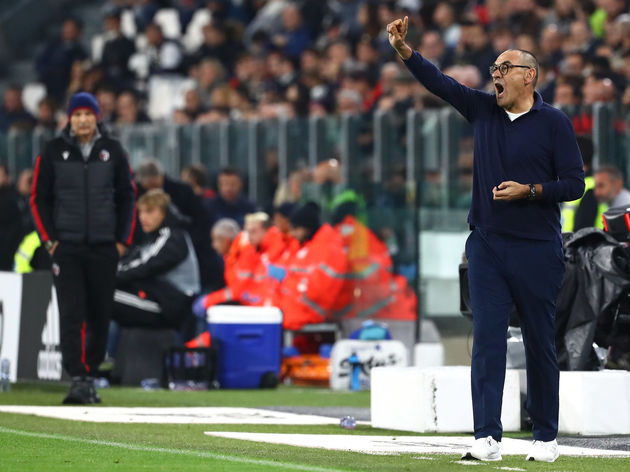 Now, not everything has been so rosy for Dybala under Sarri, and it's fair to say he still has some way to go until he reaches the heights of 2017. But so far, we have seen Dybala and old pal Gonzalo, who was only away for a season, rotate as Ronaldo's strike partner, while Aaron Ramsey and Federico Bernardeschi have shared the number 10 role.

Despite the low number of minutes, Dybala has impressed when he's played and it seems that the 4-3-1-2 looks to be getting the best out of him. Overall, Dybala has shown exceptional poise in his play and a thorough understanding of what is expected of him as a centre-forward in the 4-3-1-2 set-up. His playmaking abilities also make him a suitable candidate to play in the role behind Higuain and Ronaldo. He

Trailing 1-0, Dybala turned the game on its head in a matter of two second-half minutes, bagging a brace - his first being a moment of brilliance. After playing a prolonged one-two with Juan Cuadrado, Dybala picked up the ball about five yards outside the Lokomotiv box with a barrage of players in front of him. His first touch was underrated as it looked so simple, but he manoeuvred the ball effortlessly to his left, opening up the perfect angle for him to wrap his left-foot around it and into the far right corner.

He came up with two big goals to pull Juve out of trouble, and the first was an absolute beauty  pic.twitter.com/fyLCNAVdky

The winner (and his second) came from a rebounded Alex Sandro shot, but the technique on show for it was masterful as he half-volleyed the ball home using a combination of his lace and the outside of his boot.

The performance against Inter and the two minutes of magic against Lokomotiv should've reminded everybody of Dybala's unique talent.

Although his skillset makes it tough for managers to find a system that suits him, Sarri's use of the 4-3-1-2 looks to be the solution for the time being as he attempts to do what Allegri couldn't - make the Dybala-Ronaldo partnership work.