As you may or may not know, depending on how far your mileage stretches with the Europa League, Manchester United finally ended their winless streak away from home with a 1-0 win against Partizan in Belgrade on Thursday night.

Captained by Harry Maguire, whose initial ignorance of the coin toss seemed to be the only real online highlight from the game, the Red Devils hardly stormed to victory, requiring an Anthony Martial penalty to separate themselves from the side who sit fifth in the Serbian Superliga. 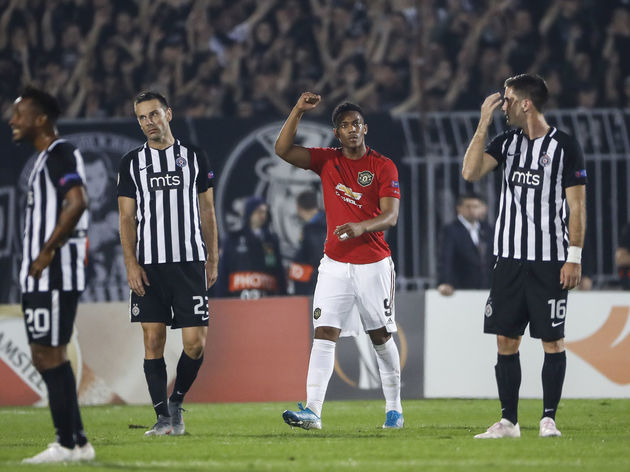 And yet, as the old adages dictate, a win is still very much a win, no matter the tedium. But that doesn't mean we can't dwell on the complete terribleness that came before it for just a moment longer.

Because, you see, thanks to the hardworking folk at Opta, we know that this was the first time United have won away from home since March (the 3-1 victory over Paris Saint-Germain in the Champions League), ending an 11-game winless run on the road in all competitions.

That win, you will remember, precipitated those famous self-satisfied words from Rio Ferdinand, urging the club to give Ole Gunnar Solskjaer a blank piece of paper on which he could 'write whatever number he wants' because he was, and I cannot stress this enough, 'AT THE WHEEL' and United were 'BACK'.

Well, after promptly going away for some seven months, Solskjaer's United are now back again, and specifically back on the goalsheet on their travels.

Yes, ​Martial's 43rd-minute penalty ended a run of 392 minutes without a goal away from home in all competitions, becoming their first away strike since *gulp* August and that 1-1 draw against a 10-man Southampton side.

So, yes, Ole's side are now top of Group L with three games played, and remain unbeaten in the competition, but it was not the kind of win that banishes those barren months from memory. Not by a long shot.