Fabian Ruiz: Why You Should Believe the Hype Surrounding Napoli's Star Man

10-year-old Fabian Ruiz was (barely) plying his trade in the Real Betis youth teams when Twitter was created on the 21 March 2006. ​

The introduction of the omnipresent social media platform has continuously led to a false sense of hype surrounding mediocre players. Declan Rice was hailed as the heir to Sergio Busquets despite only managing 25+ appearances twice in his career, Marcus Rashford as the greatest striker the world has ever known and ​Jessie Lingard as England's 'golden goy'...despite being 26 years of age.

However, every now and then the internet comes together in near uniform agreement when a new, indisputable gem is unearthed. Last year it was Frenkie de Jong at Ajax, this season it is the turn of Napoli and Spain midfielder Fabian Ruiz.

The 23-year-old has surpassed expectations since arriving from Real Betis in July 2018 and has firmly cemented his place in an already talented ​Napoli midfield, with the likes of Allan, Pioter Zielinski, Eljif Elmas and Gianluca Gaetano all vying for a spot in Carlo Ancelloti's side. 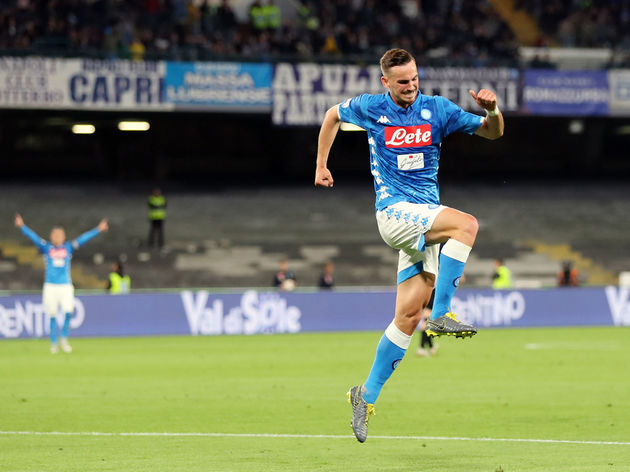 One of the main attractions of Ruiz is not the consistent standout performances that he puts in, nor the ease with which he seems to set himself apart from his peers, rather it is the fact he appears to have no significant weaknesses to his game. In other words, he is a complete midfielder.

When watching Ruiz across the Champions League and Serie A this season, one will notice the high technical ability which he possesses, reminiscent of a young ​Cesc Fabregas. Although predominantly a left-footed player, Ruiz is more than comfortable transitioning to his supposed weaker foot, and this is complemented by his ability to play anywhere across the midfield - whether being utilised as a defensive midfielder, a central pillar, a creative attacking outlet or being deployed on the left or right hand side of midfield.

The former Real Betis man boasts an incredible passing range, similar to that of a Xabi Alonso or a ​Toni Kroos. In all competitions so far in the 2019/20 season, Ruiz has contributed three assists, 1.8 key passes per game, 70.4 passes per 90 mins with a passing accuracy of 88.4%.

It is apparent that this creative contribution is not detrimental to the 23-year-old's defensive duties. This season alone, the midfielder has registered 1.9 tackles per 90 mins, 1.4 interceptions per 90, and only gave away 0.8 fouls per game, ranking him favourably amongst cream of the crop Premier League defensive midfielders such as ​Fabinho and Rodri.

Moreover, Ruiz has established himself as a more than capable creative outlet for Ancelotti this season, contributing three goals and three assists in all competitions. In addition to this, the Spaniard has contributed 2.6 shots and 1.5 dribbles per game in all competitions this season, putting him alongside creative powerhouses like ​David Silva and ​Christian Eriksen.

Fabián Ruiz is a shining light in a struggling Spain side

It is abundantly clear that young Ruiz has a career of superstardom ahead of him and his performances have already gathered the attention of European giants such as ​Barcelona, ​Real Madrid and ​Manchester City.

In January 2019, Ruiz told Radio Kiss Kiss in Naples (as quoted by ​Football Italia) that his desire to 'follow in the footsteps' of his childhood idol Xavi.

In 2019, after 11-and-a-half years and 408 appearances for Napoli, Marek Hamšík departed for Dalian Yifang. The Slovak midfielder had been a beacon for Gli Azzurri, cementing his place in Naples folklore. Whilst the 32-year-old's legacy is undisputed, Ancelotti has seemingly higher hopes for Ruiz, ​stating: So, what is next for the player with the world at his feet?

It is no surprise that the major European clubs have come sniffing, despite Napoli President Aurelio De Laurentiis setting the midfielder's price tag at £150m. Regardless of whether the Spaniard moves to Manchester City to replace David Silva, Real Madrid to replace the ageing Kroos and ​Luka Modric, or to Barcelona in an attempt to emulate arguably the best midfield club football has ever seen, it is apparent that Ruiz will no doubt improve any side in world football.

Despite his relatively young age, Ruiz has amassed 110 senior appearances for club and country and has seemingly set himself apart from the aforementioned hype merchants, because, well, he is the real deal.

Like Kylian Mbappe in 2017 and Frenkie de Jong in 2018, Fabian Ruiz appears to be another generational talent who even the most facetious Twitter users can agree looks to be a mainstay at the very top level for years to come.