90min's Hall of Fame has already welcomed some absolute giants of the game over the past week, and the legends just keep on coming in the Class of 2012 edition.
We've seen Champions League and domestic title winners, club legends, and inspirations of a generation all inducted into the prestigious Hall of Fame, but none of them are worthy of cleaning the boots of this class.
Has any other inductee ever given himself his own nickname, and forced everyone to call him by said moniker? Or even written the word 'shoot' on his tactical notepad like the visionary that he is?
Has any other inductee ever showed you the stairs which lead up to the bedrooms on Homes Under The Hammer, or played a musical instrument that he invented himself?
Does your class contain two footballers that played on the same team but hated each other?
​
I thought not.
Without further ado, let's get on with 90min's Class of 2012 Hall of Fame. The evening's ceremony kicks off with a true footballing legend. The oldest player to make an appearance and to score in Premier League history, more than 50 England caps, and a goal in perhaps the most dramatic ​Champions League final of all time.
He needs no introduction - but he gets one regardless. It's Teddy Sheringham, of course. Sheringham strides onto the stage, and a rousing applause ripples around the auditorium - that is, except one single boo from the front row. Dwight Yorke tells Andy Cole it's not the time or place for such behaviour, and he reluctantly quietens down.
Sheringham swivels off the stage like its 1999, and a visibly teary Ole Gunnar Solskjaer begins twitching in his seat. 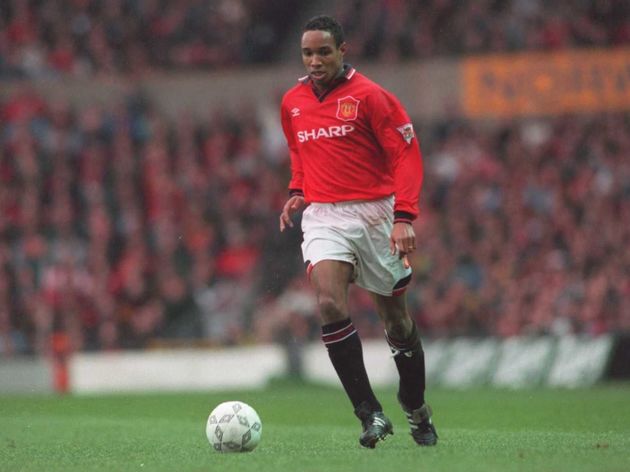 Next up is Paul Ince, one of the greatest minds in the footballing world. As he closes in on the stage, a notepad falls out of his pocket, which reveals his detailed instructions to himself: 'Collect award,' with a picture of said award drawn neatly in the middle of a penalty area.

As 'The Guv'nor' is welcomed into the Hall of Fame, he suddenly grabs the microphone from his inductor, Steve Bruce.

"This guy, Brucey, he should be in the Man Utd job right now! I know he's got the worst win percentage in ​Premier League history, and Ole's come in and steadied the ship, but I think any footballer from my era could do this job - even Mark Hughes!"

Security guards quickly surround Ince and drag him away from the spotlight, and as he's pulled through the emergency exit doors, the immortal words "I'M THE GUV'NOR" echo around the room. Darren Anderton sheepishly climbs onto the stage and is greeted by his inductor, the ​Tottenham Hotspur physio. They share a lengthy and passionate handshake, but their joy is short-lived. Anderton falls to the floor in a crumpled heap, and appears to be clutching his index finger in agony.

After Anderton's broken fingers are strapped up, he is back on the stage to accept his induction. The former Spurs man smiles, waves to the crowd, and heads back towards his seat, soaking up the applause.

Delighted with only one minor mishap, Anderton clicks his heels as he springs off the last step in a Billy Elliot-esque jig. The crowd cheers, but then a groan sweeps the auditorium as Anderton trips and clasps his hamstring, signalling for immediate medical attention. As Darren Anderton is carried down the aisle on a stretcher, the next inductee Andy Cole gives him a pat on the arm (spraining Anderton's wrist) and bounces up the steps and onto the stage. Cole is met by - who else - but Dwight Yorke!

Yorke passes the award to Cole, who hands it back to Yorke, who then returns the favour to Cole once more. The crowd goes wild and the pair embrace one another, arms aloft and tears flowing.

Cole looks at his award and mutters "It's Andrew, not Andy," and one of the Premier League's most clinical striker in its history makes his way off the stage.

Sheringham pretends to receive a phone call and heads for the exit. As the great goalscorers are continuously rolled out, Jimmy Floyd Hasselbaink is the next to grace our stage of triumph. He's welcomed by a wonderful, warm introduction from Eidur Gudjohnsen, who's set up Hasselbaink perfectly to begin his speech.

Hasselbaink adjusts his dicky bow, clears his throat and gives a stirring speech, reminding the audience of the days when Chelsea couldn't buy the league and actually had a soul.

Hasselbaink is rushed off the stage by security, assumes a new identity and moves to an unknown safe house somewhere in Florida. 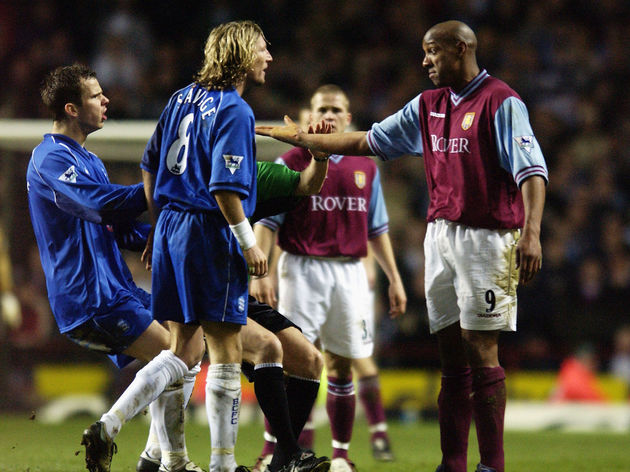 The lights dim in the auditorium. The audience holds its collective breath, until it hears the rhythmic beat of a percussion instrument. Is it a goblet drum? Is it a djembe? No - IT'S A DUBE!

Dion Dublin comes jiving down the aisle and up onto the stage, dube in hand, wearing today's Homes Under The Hammer outfit and a giant grin. The big man soaks up the plaudits, only to be greeted by inductor and pantomime villain Robbie Savage on stage!

"OH YES I WILL!" retorts Dublin.

A giant cheer goes up around the crowd as Dublin ploughs straight through Savage with a two-footer and then plants a brutal headbutt on the Welshman's nose.

Welcome to the Hall of Fame, Dion. Finally, a picture of Gary Speed appears on the big screen behind the stage, and the whole audience rises to its feet at once and applauds a true footballing legend.

Ex-teammates approach the stage and pay touching tributes to the dignity and character of a man heralded as one of football's very best good guys.

Speedo was an exemplary footballer, manager and human being, and he deserves to be recognised as much as any other man or woman in the sport. A gentleman, a leader, and an excellent footballer, Gary Speed completes the Hall of Fame's Class of 2012.