​It wasn't long ago that a young(ish) Spanish prodigy was taking La Liga by storm, showing the world why Real Madrid forked out a whopping €30m to lure him away from Malaga with a series of breathtaking goals and stellar performances.

For a couple of sensational years, Isco was able to turn agua into vino, his close control and subtle passing breaking up defences all around Europe.

The Spaniard was a magician in a floating role behind the forwards, providing a thoughtfulness to Real's blood and thunder, hit-hard philosophy, and his footwork and vision was matched only by the cream of the crop in Spain. Unfortunately for the 27-year-old (and ​Real Madrid), Isco just doesn't fit Zinedine Zidane's plans and style now. There's no room in a pretty rigid 4-3-3 to accommodate a mediapunta like the former Malaga man, and his inability to adapt to new roles has left him cut adrift. He also has a habit of being slightly unfit; not something which endears him to his coach.

Time is running out for the one-time wonderkid to fulfil his potential, and it's becoming abundantly clear that his star will not shine bright at the Santiago Bernabeu again. Where next? Well...

Yeah, let's just get this one out of the way shall we? A huge footballing star who is no longer at the peak of the powers, but can be one of the best on his day and earns loads of money - there's only one home for him, right?

​Man Utd are certainly bereft of star quality going forward, and a lack of creativity is a major concern for supporters and coaching staff alike. Isco could slot nicely into the Red Devils' midfield, and if given the freedom of Old Trafford, he could destroy most Premier League defences when he's up for it. It looks like a match made in heaven from the outside, but then again, so did Angel di Maria, Memphis Depay, ​Alexis Sanchez, ​Romelu Lukaku, Fred...and so on.

Staying in England for a second, Man Utd's bitter rivals could provide a comforting home for the Real Madrid misfit. It's clear that Isco thrives in a loving environment, and he benefits from an 'arm around the shoulder' rather than a 'clip across the ear' managerial approach.

Klopp has developed and improved nearly every player he has coached at Anfield and taken their game to a new level, and Isco must look at the ​Liverpool love-in and want a piece of the action. 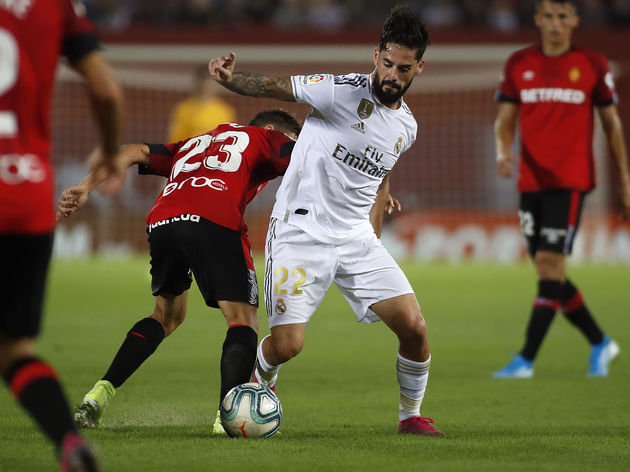 The Reds are top of the league by six points and are in imperious form, but Klopp's men do suffer from a lack of creativity in midfield, and the team tends to hit a bum note when the front three aren't on song.

Isco could provide the spark to unlock stubborn defences in key games, and help push the Merseyside club over the line to gain that elusive ​Premier League trophy. Then again, the Madrid man may have to settle for a bit-part role at Anfield, which he's probably keen to avoid.

We get it -  the Premier League has money!

One team that doesn't get the rounds in at the Premier League pub crawl, though, is ​Tottenham Hotspur, who prefer to count their pennies rather than spend them. The north London club will need to get their chequebook out in the near future though, with a core group of players potentially departing the Tottenham Hotspur stadium for nothing at the end of the season.

One man who seems destined to walk off into the sunset is ​Christian Eriksen, and the midfielder remains intent on seeing out the rest of his contract and joining another top club in July. With that news in mind, Spurs fans may look to Isco as the heir to the great Dane's throne. Both players are equally creative and deadly on the attack, and Spurs coach Mauricio Pochettino was able to turn Eriksen into a much more well-rounded player during his time in England.

There's still hope that ​Isco could be converted into a more dogged central midfielder with the freedom to break lines and push forward - but he's shown precious little so far in his career to suggest it.

When we finally step away from the English top flight, it's actually quite hard to find a viable fit for Isco. A domestic move across Spain seems highly unlikely, the financial aspects of a deal rules out all Italian and German sides bar the already well-equipped ​Juventus and ​Bayern Munich, leaving the Madrid star stuck in footballing limbo. However, over in France, there happens to be a team with a shed-load of cash, an attacking style of play and a midfield dying for a creative force such as Isco. Paris Saint-Germain bolstered their midfield options over the summer by signing ​Everton's Idrissa Gueye, but their alternatives remain on the light side, and there is definitely space for someone with Isco's quality to nail down a starting role.

The 27-year-old is talented enough to take a central midfield role alongside Verratti and Gueye, or replace the inexplicable presence of Eric Maxim Choupo-Moting up top.

I think we can all unanimously agree that this would be an absolute travesty, should it come to pass. But it wouldn't be a surprise, given the financial muscle that the Chinese Super League now possesses. If Isco is unable to find a loving home in Europe, he may cut his losses and earn his pension in China until a better offer comes along. The CSL is no longer the graveyard it once appeared to be, with players returning from Asia to settle back into European football with ease and continue their international careers.

It'd be a crying shame if Isco called time on his career in the big leagues so soon and with so much left to give, and hopefully the Spaniard will find a club worthy of his indisputable talents.