7 Crazy Seasons That Needed an Amazon 'All or Nothing' Documentary

​The decision to put a microscope on (and by this we mean allow Amazon to stick up a load of cameras to film the whole thing) Tottenham's worst season in years was an arrogant miscalculation by those at the top of the club, who were probably hoping to push on for greatness after reaching the Champions League final in 2019.

Big signings in the form of Tanguy Ndombele and Giovani Lo Celso gave Spurs reason to be optimistic, but the reality is this iteration of Tottenham has outstayed its welcome and is going to need gutting over the next couple of transfer windows - the questionable future of Mauricio Pochettino just adds some more flavour to mix.

Tottenham Hotspur is to be the focus of the latest Amazon Original docuseries All or Nothing, charting the Club's journey during the 2019/20 season.#THFC ⚪️ #COYS

If Daniel Levy knew of the shenanigans his football club were up to this season, he may have thought twice about ​broadcasting the inner workings of it to the world.

That got us thinking - what were the best (funniest) seasons in recent history that would have been great to watch from the inside? For well over half a season, rival fans were shouting 'You're going down with the Chelsea' from the terraces, and it was without any sense of irony - the champions were teetering just above the drop zone until around February.

A true Jose Mourinho third-season disaster-class; after emphatically winning the Premier League, Mourinho allowed his squad an extra couple of weeks off in the summer as a reward, but his trust would be misplaced, with many of his players returning for pre-season unfit.

When domestic action kicked off, Mourinho became embroiled in a sexism row with club doctor Eva Carneiro during a disappointing 2-2 draw at home to Swansea, and spirits failed to recover at Stamford Bridge. He was dismissed in December, and Guus Hiddink had to steer Chelsea to a tenth-place finish, their lowest in the Roman Abramovich era.

Oh, and let's not forget about the 'Battle of the Bridge' against Tottenham, which would have been superb content, too.

Today was not good enough and we let everyone down,but the rumours about the boss hitting someone are bollocks,crazy how powerful twitter is

When players have to come out and deny that the manager punched one of the players, you know it's worthy of having a documentary about.

Tottenham's original banter season (post-90s) came after selling Elvis (Gareth Bale) and buying The Beatles (some blokes from Powerleague). An uncomplimentary set of players under two head coaches with no plan, Spurs stumbled their way to sixth place somehow, despite their best efforts to finish in the bottom half.

Andre Vilas-Boas and Tim Sherwood were both out of their depth, couldn't get any of the squad on their side, and were routinely hammered by sides above them. All in all, a great season content-wise, and their last of incompetency until this year. Going back to Mourinho...

After toppling ​Barcelona in ​La Liga the previous year, Mourinho's task of securing ​Real Madrid's tenth ​Champions League title rolled into the 2012/13 season, but was only able to make one marquee summer signing in the form of ​Luka Modric, who would be voted the worst signing in Spain that season. For good measure, he brought a declining Michael Essien in on loan to try and get the old band back together.

Domestically, Madrid were blown out of the water by Tito Vilanova's Barca, with the title race all but over by Christmas, but their main disappointment came in Europe. For a third successive season, Mourinho and Madrid were dumped out at the semi-final stage, this time by Jurgen Klopp's ​Borussia Dortmund, which featured a 4-1 hammering in the first leg.

Powers waning and supporters becoming alienated with him, particularly for benching club legend Iker Casillas, Mourinho still had the chance to salvage some pride by beating rivals ​Atletico Madrid in the Copa del Rey final at the Santiago Bernabeu. However, a feisty encounter saw the him sent off after 76 minutes, and Atleti prevailed in extra-time to cap off what Mourinho called the worst season of his career. I know that everyone reading this sub-heading has immediately thought of Steven Gerrard slipping. Good on you.

​Liverpool's best shot of winning the title (until last season) came in the 2013/14 campaign. Without European competition to distract them, and ​Luis Suarez committing to the club for another year, the Reds' ambitions of simply returning to the Champions League were quickly upgraded to ending their long drought without a league title.

Suarez and Daniel Sturridge spearheaded the effort in spite of Liverpool's defensive frailties - they scored 101 ​Premier League goals, but conceded 50. With a few weeks of the season remaining, they famously beat title rivals ​Manchester City 3-2 at Anfield, prompting Gerrard to tell his teammates that 'this does not f****** slip'.

And then he slipped. And they lost to ​Chelsea. And then they threw away a three-goal lead late on at ​Crystal Palace.

A script better than anything produced in Hollywood, and it would've been great to see the aftermath close up. Here's the pitch: 'Sunderland 'Til I Die', but much worse.

If you're somehow unfamiliar with ​Derby County's record-breaking Premier League season in 2007/08, let's summarise it for you - they won a single game, scored 20 goals, conceded 89, and earned 11 points. Their top scorer that year was Kenny Miller, with four goals.

It stands as one of the worst campaigns by any club in any competition in football history, one so bad that the winner of the club's player of the year award was the fans (see also: ​Queens Park Rangers 2012/13).

With hindsight, the funniest part of Derby's season was probably their first match purely for the trajectories of their seasons. The Rams drew 2-2 at home to Portsmouth, who would go on to win the FA Cup that season. Oh, what could have been (but probably/definitely not). Yet another Mourinho third season ended in disaster, this time with Manchester United. After talking ill of his squad all summer, it was largely expected that the Red Devils were in for a tough season, but as always, Mourinho was the star of the show.

After being hammered 3-0 at home by Spurs, Mourinho asked reporters how many goals Mauricio Pochettino's side had scored, before saying that this is how many Premier League titles he has won and demanded respect for that. Okie-dokey.

United continued to fall away in terms of results and performances until Mourinho's dismissal in December, which then brought the next set of comedy: Ole at the Wheel.

After plucking some incredible results out of their metaphorical backside, United returned to dropping points all over the shop and throwing away the chance to finish in the top four. A season of a few ups and many, many downs. 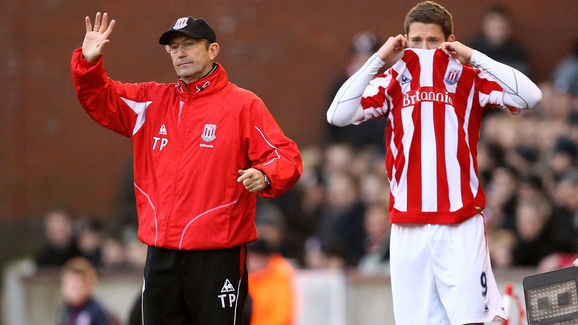 Two potential seasons of show content for Amazon here, with much of Tony Pulis' time at Stoke worthy of documenting for future generations.

Back in 2009/10, when Rory Delap's long throw was essentially still (somehow) the most effective weapon in the Premier League, there were rumours that Pulis had had a set-to with striker James Beattie in the dressing room after a clash with Arsenal. Furthermore, this fight had happened while both were in the shower and naked and had culminated with Pulis headbutting Beattie. Again, in the shower and naked. If that isn't the kind of edgy, uber-violent drama that sells in 2019, I don't know what is.

A couple of years later, in the final days of Pulis' Potteries Rome, there was the now infamous pig's-head-in-locker incident involving Kenwyne Jones, Glenn Whelan, Matthew Etherington and Jonathan Walters. A classic whodunnit with some uber-violence thrown in for good measure.