​​AC Milan conceded a late equaliser to Lecce as Stefano Pioli's first game as their new manager ended in a 2-2 draw, the hosts surrendering the lead twice at San Siro on Sunday night.

AC dominated the first half in both possession and shots on target, their new tactics fitting in well. Their two wide attacking players Suso and Çalhanoglu ran the show and the Turkey international opened the scoring, rifling the ball past Lecce's Gabriel smartly from a tight angle. However, Lecce came out in the second half with some real impetus and took the game to AC, and were awarded a penalty when Andrea Conti was judged to have handled the ball. Khouma Babacar stepped up, Donnarumma ​saved it, but Babacar tucked away the rebound.

Milan looked relatively devoid of any creative spark before Krzysztof Piatek came off the bench to give his side the lead again, Çalhanoglu adding to his earlier goal with an assist for the Poland international.

But Lecce snatched a point with a late equaliser to break Pioli's heart on his debut. Marco Calderoni grabbed the goal, lashing in a stunning left-footed strike to give Lecce a deserved point following an impressive second half performance.

All eyes were on Stefano Pioli's debut as AC Milan manager. Much was made about the starting XI - especially with Milan fans questioning the continued selections of Calhanoglu, Lucas Biglia and Franck Kessie. However, the new manager was rewarded after 20 minutes when Calhanoglu opened the scoring.

The late strike from Calderoni condemned AC Milan to two more dropped points as they struggle to get any sort of form going.

Pioli will take some confidence going forward as Milan's attack looked refreshed, with Calhanoglu looking more naturally suited to playing behind a front two. However, he will no doubt be disappointed that his team couldn't hold on.

STAR PLAYER - Prior to this game, Calhanoglu had come under plenty of scrutiny from AC Milan fans and many questioned his selection. 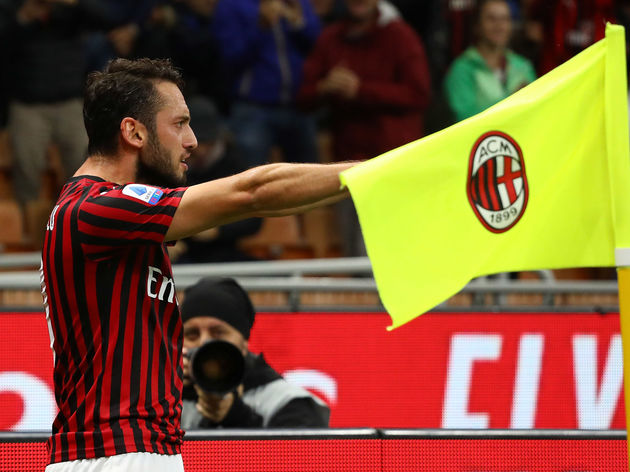 He answered those critics with a superb performance. He opened the scoring after 20 minutes for I Rossoneri with a smart finish from a tight angle - definitely worth a watch if you haven't seen it, so get those highlights up on your phone.

His performance was consistent and he led most of AC's attacks. He added to his earlier goal with an assist for Piatek's goal.

Calhanoglu is having an out of body experience today

That assist by Calhanoglu brings back the memories of Ronaldinho. Absolutely filthy. #MilanLecce

AC fans will now hope Çalhanoglu can continue this type of form going forward - Pioli looks as if he has given the Turk a new lease of life.

AC Milan travel to the capital next weekend to face Roma in a clash that could be pivotal in which Serie A team qualifies for European football for next year. They will regret conceding that late Calderoni goal and will want Pioli's first win as soon as possible.

Lecce's tough schedule continues when they host unbeaten table-toppers ​Juventus. They will take plenty of positives from Sunday's performance as they look to move away from the relegation zone.