Liverpool's perfect start to the Premier League season came to an end on Sunday as they laboured to a 1-1 draw with a spirited Manchester United side at Old Trafford.

The first half was played with real pace and energy, and it was United who controversially drew first blood. Daniel James' perfect cross found Marcus Rashford in the box, and the Englishman tapped home to give his side the lead after 36 minutes, despite calls from Liverpool for a foul on Divock Origi from Victor Lindelof.

In the second half, United sat back to defend their lead. Liverpool were forced to settle for speculative efforts from distance, whilst United came close to grabbing a second when Rashford's low drive fizzed past the post.

Liverpool looked to be heading to defeat, but substitute Adam Lallana grabbed a late equaliser when he tapped in at the back post to ensure their unbeaten start to the season continued, but only just. Well then, nobody saw this coming. For weeks, ​United have been ridiculed for their poor performances, but the Red Devils looked nothing like that side here.

Ole Gunnar Solskjaer's decision to switch to a back three gave United more defensive stability, and ​David de Gea's return to fitness helped inspire confidence. They played with desire and energy, which is exactly what fans have been crying out for all season.

If United persist with this formation & play with this intensity.. & add Martial & Pogba to the lineup.. things could get interesting 類 #MANLIV

Am really liking the formation from United and the back three. Too bad Tuanzebe went out during pregame warmup. Also impressed with how AWB and James are linking up 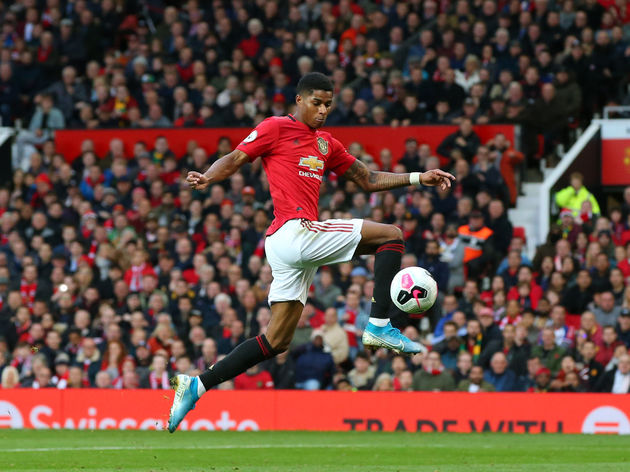 His energetic showing was impossible to deal with. Liverpool's defence could not keep up with Rashford, who was running down the channels and into the area with frightening ease. He was involved in absolutely everything positive for United.

Rashford has Virgil’s confidence in tatters In pursuit of that record-tying 18th consecutive win, Liverpool looked like they didn't really want it. They were second best for the majority of the game, only for a late ​Lallana goal to save the day.

With ​Mohamed Salah out through injury, the onus was one the rest of Liverpool's attack to step up, and they simply did not. ​Jordan Henderson and ​Fabinho both lacked the nous to create something out of nothing, but ​Mané and ​Roberto Firmino also looked off the pace.

Rigged or not (it obviously is duh), Liverpool aren't playing like they're calling the shots in the league right now. Negative body language since minute 1, they simply don't look confident they are winning

An absolute shocker from Klopp. Salah is injured and the whole team falls apart and his masterplan is to put Lallana on....  The Dutchman was a powerful presence at the heart of the pitch, and he showcased some impressive footwork and vision to try and keep his side moving forward. He isn't supposed to be the creative force in midfield, but Wijnaldum was forced to try and step up to help his side recover.

​​Wijnaldum faded as the game progressed, but his energy was still clear to see. Liverpool's midfield was abysmal here, but they would have been far worse off without Wijnaldum.

United head to Serbia to face Partizan Belgrade in the Europa League, before returning to domestic action with a trip to ​Norwich City on Sunday.

As for Liverpool, they face a ​Champions League clash with Genk on Wednesday, before coming back to England to meet ​Tottenham Hotspur on Sunday.