Borussia Dortmund secured a vital victory on Saturday afternoon, as they beat leaders Borussia Monchengladbach 1-0 at the Signal Iduna Park.

The first half was filled with some excellent chances, and only remained goalless thanks to some fantastic goalkeeping. ​Roman Burki did brilliantly to keep Breel Embolo out on two occasions, while Yann Sommer was in fine form as ever with a string of incredible saves.

BACK TO WINNING WAYS! pic.twitter.com/fEznzQm88v

Soon after the half-hour mark, Borussia Dortmund went ahead through Thorgan Hazard. Or, well, didn't. While he got a bit of luck with a deflection that took it past Sommer, it didn't matter as VAR ruled it out for a ridiculously tight offside call in the buildup.

Following a strong start to the second half, Dortmund finally broke the deadlock with a nicely worked goal. Hazard played it to Julian Brandt who threaded it through to Marco Reus, before the captain coolly slotted it home to give the Schwarzgelben the lead just shy of the hour mark.

From then on it was all Dortmund as they piled on the pressure in search of the second goal. BVB were once again denied a goal six minutes from the end, as Brandt's superb finish as disallowed due to Reus obstructing Sommer's view of the ball. 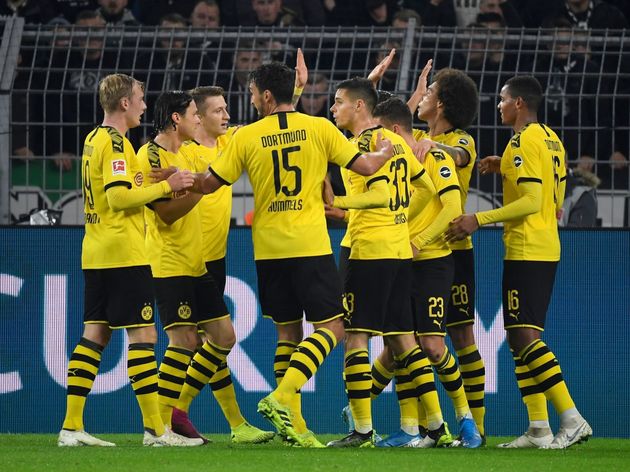 Knowing a win would see them move back into the European spots, ​Borussia Dortmund were desperate to win on Saturday. They started very well and were at their best going forward, but went into the break without a goal thanks to Sommer's heroics and a harshly disallowed goal.

While the Schwarzgelben were unlucky not to have scored, they fought on and got their deserved goal just before the hour mark. For all of Dortmund's excellent attacking play, a solid defensive performance - especially from goalkeepers Roman Burki and Marwin Hitz (Burki came off with 20 minutes to go; they weren't playing two keepers) - was critical in securing the win.

It was a fantastic performance from Lucien Favre's side, who did everything they needed to do in a flawless performance going forward and at the back. They needed something special to defeat the ​Bundesliga leaders, and they produced exactly that in a vintage BVB performance.

STAR MAN - It was a typical captain's performance from ​Marco Reus, who was outstanding all night long. The German scored the crucial winning goal in style, but was also at the heart of every BVB attack and inspired every single move in a fantastic display at the Signal Iduna Park.

Dortmund's goalkeepers also both deserved great credit for keeping a hard fought clean sheet. Burki was intelligent between the sticks, and Hitz pulled off a crucial save late on after coming on to replaced the injured Dortmund number one.

This was a CLASSIC Reus goal. #BVBBMG Borussia Dortmund have two huge games next week, starting with the trip to San Siro to face ​​Inter in the ​Champions League on Wednesday. The Schwarzgelben then contest the first Revierderby of the season, travelling to arch-rivals ​Schalke on 26 October.

Borussia Monchengladbach also have a difficult double bill next week, and also begin with a trip to Italy to meet Roma in the Europa League on Thursday. They are back on home soil on 27th October, as they host Eintracht Frankfurt in the league.