Bayern were made to rue their missed chances on Saturday afternoon, as Niko Kovac watched his team register a disappointing 2-2 draw against struggling Augsburg.

The game got off to an incredible start, with Marco Richter latching onto the end of Rani Khedira's header to volley Augsburg into a shock 1-0 lead inside 90 seconds. Things got even worse for Bayern soon after as Niklas Sule was forced to withdraw due a knee injury.

Fortunately for the visitors, Robert Lewandowski was at hand to bail his side out, as he has been so many times before. The Poland international met Serge Gnabry's cross with a glancing header to level up the scores in the 14th minute, although Augsburg keeper Tomas Koubek will be disappointed not to have done better. ​Bayern were dominant for the remainder of the first half, with Lewandowski, Gnabry and Thiago all coming very close to giving their side the lead.

They would eventually find a deserved breakthrough four minutes into the second period; Gnabry the man of the moment, cutting inside onto his left foot, before rifling a shot in from 25 yards.

Thomas Muller had two good chances to put the game beyond doubt in the 88th and 90th minutes, but failed to take either - indicative of the German's lack of confidence. 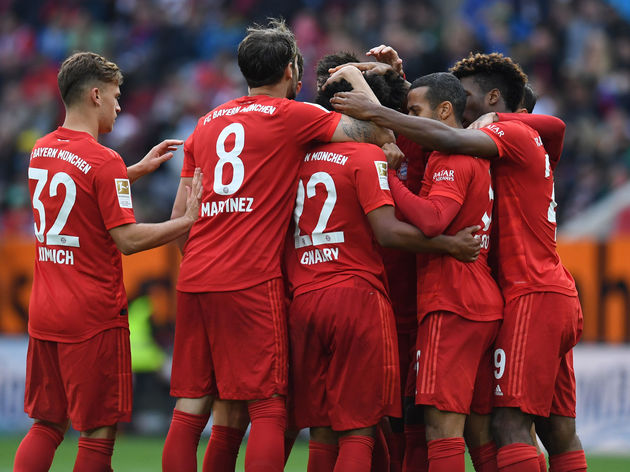 Bayern would be made to rue their shoddy finishing in the 92nd minute whem Sergio Cordova pulled the ball back to Alfred Finnbogason, who made no mistake from a few yards out.

It was a familiar tale for Bayern Munich this season, good going forward but worryingly shaky at the back.​ Niko Kovac seems to remain unsure what his strongest back four is, and that was reflected in his team selection.

Lucas Hernandez was drafted in at the expense of Jerome Boateng, with Benjamin Pavard moved from left-back to centre-back. The defensive situation was further complicated by Niklas Sule's early injury, which forced Kovac to move Hernandez to centre-back and bring on David Alaba.

Life as a Bayern fan, you wouldn’t get it pic.twitter.com/60VQhZDwwc

The result of this selection chaos was a Bayern defence that looked devoid of confidence and composure. Augsburg's Marco Richter and Ruben Vargas forced mistakes with regularity in the first half, which better teams would have been clinical enough to punish.

It's only a matter of time until Bayern's attackers ran out of ways to make up for the defensive unit's shortcomings, and in the end Augsburg last-minute equaliser was not all that surprising.

Bayern must learn to defend better, it's as simple as that.

His goal was created out of nothing, and was reminiscent of Arjen Robben in his prime. His rifled shots – which start low before subtly moving outside of the goalkeeper's grasp – are bound to be a sight witnessed frequently over the next few seasons in Munich.

Serge Gnabry has been directly involved in 9 goals on his last 4 games. pic.twitter.com/a00C2usZuL

His understanding with Joshua Kimmich grows with each passing game and the pair combined on a number of occasions against Augsburg.

Gnabry!!!!! On the way to having another great season and really establishing himself as one of the best wingers in Europe.

Serge Gnabry has been sensational this season

​Bayern travel to Olympiacos in the Champions League on Tuesday before they face Union Berlin at the Allianz Arena the following Saturday. Augsburg, on the other hand, face a tough test at high-flying Wolfsberg next weekend.