​Manchester City are the latest side to express an interest in Red Bull Salzburg striker Erling Håland, after scouts watched him score against Liverpool in the Champions League.

The 19-year-old took his tally to four goals in just two European games when he came off the bench to net against Liverpool in the 4-3 defeat in early October. 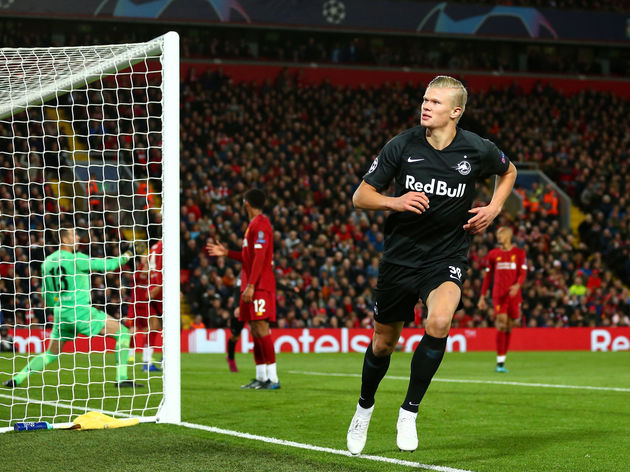 According to ​The Sun, ​City scouts were actually at that game to take in Håland's performance and, after seeing him find the back of the net just four minutes after coming on as a substitute, they are now eager to strike a deal.

90min learned of City's interest in Håland back in September after watching him net a hat-trick against Club Brugge, and that interest appears to have strengthened as a results of the scouts' reports from the ​Liverpool game.

Salzburg have accepted that they will have to part ways with Håland eventually, and they are looking to earn around £50m from his departure. However, they will try and fight off the interest in January as they would prefer to sell at the end of the season. City are by no means the only side keen on the teenager. There were representatives from 15 different clubs in the stands for the game against Club Brugge, with the likes of ​Chelsea and ​Manchester United understood to be especially keen.

However, there is also plenty of interest in Håland from abroad. ​Barcelona​Real Madrid​Borussia Dortmund

Håland's father, Alf-Inge, previously played for City between 2000 and 2003, and the Citizens hope to see the youngster follow in his father's footsteps. A club source admitted that City are confident they could win the race for his signature, particularly as a result of the elder Håland's past association with the club.

The striker's future has been one of the talking points of the entire season. However, Håland is seemingly not interested, previously insisting incessant reports linking him to United and Arsenal were 'f*****g boring'.

The speculation is certainly not going away any time soon, Håland may have to get used to seeing his name up in lights fairly soon.