Predicting Manchester United's Starting XI for the Clash With Liverpool

​Ole Gunnar Solskjaer and his Manchester United side host Jurgen Klopp's high-flying Liverpool, knowing that a victory could turn the Red Devils' season on its head.

Despite picking up impressive victories over Chelsea and Leicester already this season - wins that displayed both United's attacking and defensive capabilities - they currently sit 12th in the Premier League table and without a win since the victory over the Foxes a month ago.

In their defeat to Newcastle

Key injuries have, of course, disrupted them, this season, but let's get this straight, this is undoubtedly the worst United side of the Premier League era and ultimately, the top-four seems a long way away at the moment.

However, a result against the early table-toppers on Sunday will instil some much-needed confidence within this United dressing room and you never know, they might be able to turn it around.

Here's ​​how they should lineup for their pivotal Premier League Diogo Dalot (RB) - Despite Aaron Wan-Bissaka nearing full fitness, he likely isn't ready to start a this weekend, so expect Dalot to fill in.

Harry Maguire (CB) - Currently, he has to be the first name on the team sheet. Although his hefty price tag will have opposition fans critiquing his every breath, Maguire has been impressive so far this season with United conceding just eight times. Maguire showed at Newcastle he's more than capable in possession and is also a major threat in the opposition box.

Axel Tuanzebe (CB) - The 21-year-old has looked comfortable in multiple positions since being drafted into Ole's starting XI. With Lindelof leaving a lot to be desired, Tuanzebe is the best option to partner Maguire

Ashley Young (LB) -  I mean, he's the captain, but he's not very good. This is a real problem area for United at the moment, and that's saying something. The converted winger seems scared to enter the final third and he's not exactly a stout defender. However, despite his deficiencies, he should get the nod over Marcos Rojo Nemanja Matic (CDM) -  Ole has to get rid of the 4-2-3-1 and match-up with Liverpool in a 4-3-3, with Matic holding. The Serb is a long way off of the player he was four years ago but he's the only United midfielder who can pass the football with relative accuracy - when Paul Pogba's through

Juan Mata (CM) - With Paul Pogba seemingly out, Juan Mata to start this one and - hopefully - give some creative edge to a pretty average midfield. 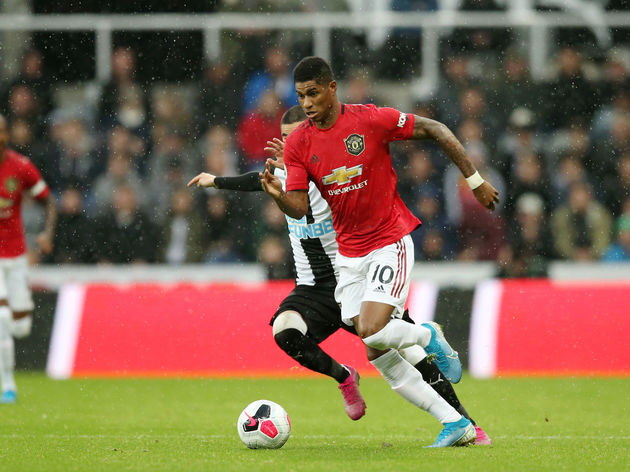 Andreas Pereira (RW) - Ok, if I'm honest, I don't know what Andreas Pereira brings to the table, but with the sheer amount of injuries OGS has to deal with, expect him to start...sadly.

Marcus Rashford (ST) - His form has been a factor to why United have struggled to score this season, with the Red Devils scoring just nine times in the Premier League and five times since the opening weekend. Against Bulgaria, Rashford

Daniel James (LW) - The goals have dried up for James in recent weeks, the Welshman not scoring since the 1-1 draw at Southampton