De Gea suffered a muscle problem while in international action for Spain earlier this week, limping out of his country’s Euro 2020 qualifier against Sweden. 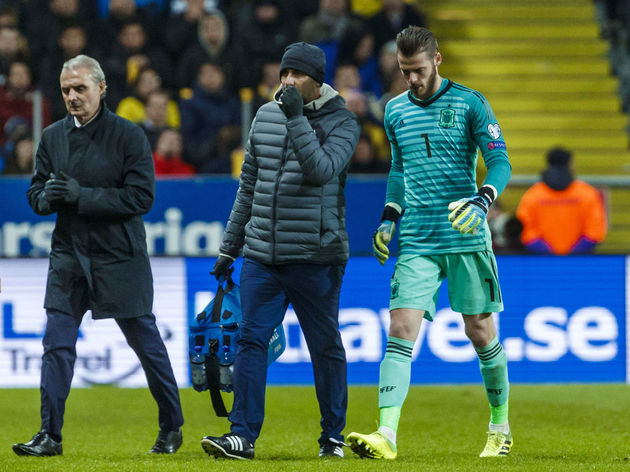 There were early tabloid claims that he could be out of action for two months, but Solskjaer insisted the injury is less serious when he spoke at his weekly press conference on Friday.

“I don’t expect him to play, but it wasn’t as bad as feared,” the Norwegian said, via ManUtd.com.

Solskjaer actually admitted that his own immediate reaction was one of great concern that his vice-captain and joint longest-serving player could be missing for a month or more. But he is grateful that is not now likely to be the case in reality.

“When I saw the game, I thought that’s him out until the [November] international break, because we’ve had some long-term muscle injuries, but it’s not as bad as feared.”

There is no specific timeframe for De Gea’s return, but, after Liverpool, United have six further games across three competitions before pausing for the next international break on 10 November. In theory, the 28-year-old should be back on the pitch in at least one of those fixtures.

Paul Pogba will also miss the Liverpool game after he was unable to recover from a troublesome foot injury in time, but there could be returns for Anthony Martial, who hasn’t played since August, and Aaron Wan-Bissaka, who has sat out three games with illness.

United go into the Liverpool clash on a wretched run of form that has seen them win just five of their last 23 games in all competitions since March last season. They have endured their worst ever start to a Premier League campaign, while Liverpool, conversely, have won 17 straight league games.

Solskjaer has insisted that while it is impossible for the mood at any club not to be affected by bad results, the fact that it is fierce rivals Liverpool will give an already ‘determined’ group of players additional motivation to upset the apple cart.

"The mood in a football club is always affected by results," says the boss. "But we've got a determined bunch of players and we're a determined club, the people you meet within the club can see what we're trying to do." #MUFC

“The mood in a football club is always affected by results. But we’ve got a determined bunch of players and we’re a determined club, the people you meet within the club can see what we’re trying to do,” Solskajer commented.

“The players know when it’s Liverpool coming up it’s a game that’s going to be watched by many. It’s a chance for our players to get in the history books, because if you score a winner against Liverpool, that’s always going to be there with them.”