Denis Zakaria: 5 Things to Know About the Man Utd & Spurs Target Tearing Up the Bundesliga

​If you've been keeping a watchful eye on the Bundesliga in recent years, you'll be all too familiar with

It's difficult to miss the Switzerland international as he rampages round the middle of the park, forcefully dispossessing opponents, before pinging deft balls out to his teammates. The 22-year-old has grown into one of the finest midfield destroyers in Europe over the last few seasons, alerting a number of elite clubs to his talents. According to German news outlet ​Bild, Zakaria is the subject of interest from ​Manchester United and English rivals ​Tottenham Hotspur, though Monchengladbach are set to demand a bumper fee for his services.

Here's five things you should know about the youngster who's currently ripping the ​Bundesliga apart. 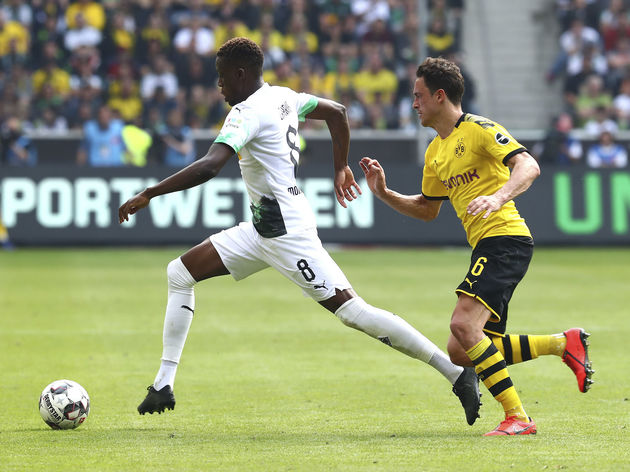 At 6'2, the imposing figure and rangy legs of Zakaria make him a superb midfield anchor for

The Genevan's style of play is reminiscent of some of the best in his position, Zakaria himself ​saying recently: " €50m - that's how much United and Spurs must fork out in order to land the Monchengladbach powerhouse, assuming that a bidding war doesn't break out and escalate the asking price.

That's a marvellous profit for his employers - who paid just Having played above his age level for the Switzerland youth teams, Zakaria made his debut for the senior side in 2016 as a fresh-faced 19-year-old, eventually becoming an irreplaceable fixture in the heart of the midfield.

He now sits on 24 international caps and three goals, all of which were scored after the start of the 2018/19 season. However, the Servette academy graduate had to be patient for an opportunity in Vladimir Petkovic's first-choice XI.

Though Zakaria was restricted to only two substitute appearances at the 2018 World Cup in Russia, he had secured a starting berth by the time the Nations League finals rolled around this June. Zakaria took to the Bundesliga like a duck to water, posting a passing accuracy of 100% in each of his first four games in the competition. By the end of his maiden campaign in Germany, that figure stood at 91%.

The following season's performance was similarly strong with regards to his distribution and ball retention, with the midfielder on track for another stellar performance this term.

United have struggled for creativity and quality in central areas for years, whilst Spurs are yet to replace the all-action, influential Moussa Dembele. Zakaria is a perfect candidate to help solve both of those problems, but who wants him more? You've got to have some steel if you're to thrive in the English top flight, and Zakaria has it in abundance. He may be a bit overzealous on occasion, but the wunderkind can learn to control his emotions and hone his skills.

Just four other players have committed more fouls in the Bundesliga than the Swiss this year, with that contributing to him receiving the joint highest number of yellow cards.

Nevertheless, he has shown he can use his talents to devastating effect after performing excellently in aerial duels, as well as battle on the ground. Additionally, his engine makes him a menace for opponents to have to contend with.