6 Things We Learned About England During the International Break

​England moved one step closer to sealing qualification for Euro 2020 during the international break.

A 2-1 loss to the Czech Republic was a tough way to start to period but they fought back in emphatic fashion with an emphatic and powerful 6-0 win over Bulgaria which, unfortunately, will be best remembered not for Harry Kane or Raheem Sterling's brilliance, or Tyrone Mings' debut.

Here are six things we learned about Gareth Southgate's side during the international break. After a disastrous start to the ​Premier League campaign with ​Everton, ​Michael Keane was fortunate to even be included in the squad, let alone actually start in the loss to the Czech Republic.

Keane was one of the side's worst performers, giving away possession with almost every touch of the ball, and he was unsurprisingly dropped from the lineup for the win over Bulgaria.

Both Tyrone Mings and Fikayo Tomori look more deserving of a place in the team, and ​John Stones' imminent return from injury coupled with a run in the Liverpool team for Joe Gomez could see Keane start to fade away from the England setup altogether. With Keane dropped to the bench, it was Mings who stepped up to take his place against Bulgaria, and the Aston Villa man looked completely at home.

​As a left centre back, Mings brought some much-needed composure to Southgate's side. He was willing to have possession of the ball but was good enough to actually do something with it. Even if that was often a short pass, it was executed well enough to keep the side moving forward.

Even amid the appalling atmosphere, Mings looked unfazed and carried himself with real grace. He looks like a man who has been an England player for his whole life, and that's exactly what the squad needs. Moving away from his 3-1-4-2 or more recent 4-3-3 formations, Southgate persisted with the 4-2-3-1 setup which had shipped three goals against Kosovo in the previous international break. The results were certainly mixed.

It categorically did not work against the Czechs. Mason Mount was helpless being played out of position, and Southgate's decision to switch to more of a 4-1-2-3 to try and cope with the situation needed to come much earlier than it did.

Marcus Rashford Is Better as a Winger 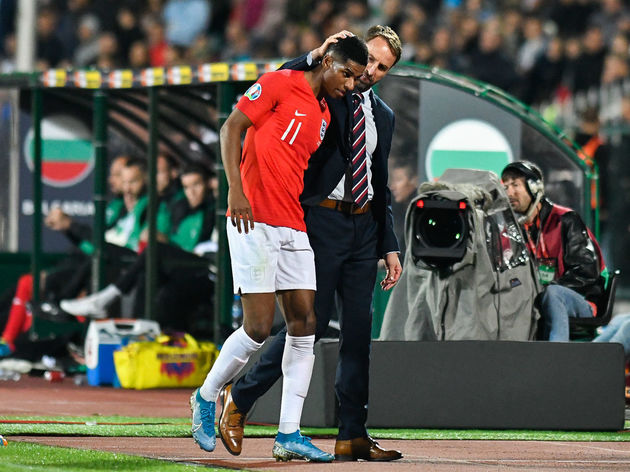 Ole Gunnar Solskjaer's determination to play ​Marcus Rashford as a striker for ​Manchester United has led to countless problems this season. Southgate, on the other hand, deployed Rashford on the left wing, and the results were superb.

Despite being low on confidence, Rashford was given the space to run at defenders and, because he was out wide, he could cut inside and capitalise on space in the box, which he is capable of doing with relative ease.

Harry Winks Deserves a Run in the Team At the base of England's midfield against the Czech Republic, both Declan Rice and ​Jordan Henderson were poor. Their distribution was unreliable and their defending was just as disappointing, so Southgate responded by starting Harry Winks against Bulgaria.

The ​Tottenham midfielder was one of the Three Lions' top performers. His composure on the ball was vital, his passing was superb and his ability to operate at a fast tempo ensured England remained on top throughout. ​

Winks was defensively solid as well, meaning he was the whole package in midfield. England need that, so England need Winks.

​There Are Some Strong Characters in the Squad

Together. This team ❤️ pic.twitter.com/E2LqtaKsK6

The Bulgaria game was incredibly difficult to watch at times, so you can only imagine just how hard it was for the players - the victims of disgusting racist abuse - to keep their cool and carry on playing.

Not a single player lost their composure in the hostile environment. They all rejected the chance to abandon the game and instead chose to remain on the pitch and score goal after goal after goal.

England could have lost that game 6-0 and fans would still have been exceptionally proud of their team. Nobody deserves to be subjected to that kind of abuse, but England proved their mental strength by staring racism in the face and coming out on top.​