​Sheffield United host Arsenal at Bramall Lane on Monday night as the Gunners aim to extend their unbeaten run to nine games in all competitions.

Unai Emery's side will be looking to pick up their second away league win of the season, while the Blades will hope to increase the two point gap between themselves and the relegation zone.

Bramall Lane hasn't been a happy hunting ground for Arsenal in the Premier League though, the Gunners visiting three times, drawing twice and losing once. They haven't had a league trip there in over a decade, and won 3-0 in their most recent visit in the League Cup. Sheffield United currently sit in 13th in the Premier League, with two wins and three draws from their opening eight games.

The Yorkshire side could be as high as seventh place after Monday's game if results go their way, with Manchester United and Tottenham among the teams they could potentially leapfrog.

​United will have to check on the fitness of three of their strikers before Monday night. David McGoldrick is unlikely to feature, but Callum Robinson and Ollie McBurnie have bigger chances of being involved. John Fleck is also doubtful.

Several key players could return for Arsenal. Hector Bellerín, Kieran Tierney and Rob Holding are available, whilst striker Alexandre Lacazette may feature from the bench after sustaining an ankle injury against Tottenham in September. The out of favour Mesut Özil seems unlikely to feature at all after being omitted from the first team squads against both ​Manchester United and Bournemouth.

The game against Sheffield United will almost certainly come too soon for Reiss Nelson, after the England Under-21 winger withdrew from Aidy Boothroyd's squad for the recent international ties against Slovenia and Austria with a knee injury.

This will be the seventh Premier League meeting between the two sides, with ​Arsenal recording two wins to United's one and the three remaining games all ending in draws. 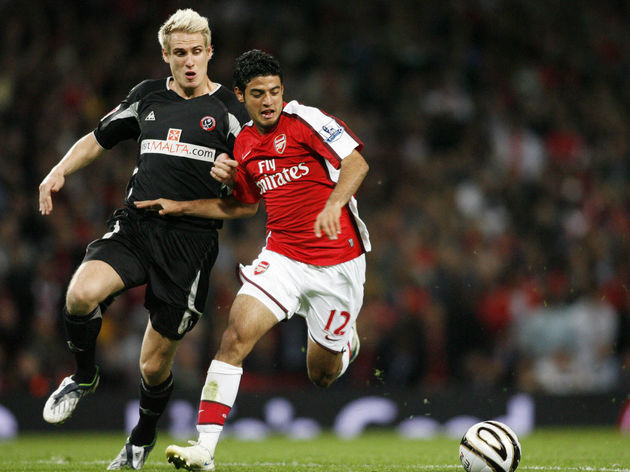 The two sides have not met in the league since December 2006, where Sheffield United emerged victorious with a 1-0 home win - Christian Nade scoring the game's only goal. There have been 17 goals scored in six meetings since January 1993, with an aggregate score of 14-3 in favour of the Gunners.

Overall, there have been 33 games between the two sides, with Arsenal winning 18, United winning seven, and eight games ending in draws.

Chris Wilder's side haven't won a game in all competitions since a 2-0 win away to Everton on 21 September, despite playing some excellent football. Since United's last win, Arsenal have scored 14 goals in all competitions and remained unbeaten throughout September.

Here's how both teams have fared in their previous five fixtures.

Arsenal are yet to win at Bramall Lane against Sheffield United (in the Premier League, at three attempts). But that could all change on Monday night as the visitors head into this fixture in fine goalscoring form.

However, Sheffield United have only conceded seven goals in eight league outings this season, keeping them in with a chance of nicking something from most games. Unai Emery will be hoping to pick up all three points with a solid performance in this game of north vs south, whilst the Basque manager will also be looking forward to see how his long-term absentees fair against a defensively well-organised Sheffield side.