England's Response to Racism Was Admirable, But a Team Needs to Walk Off to Make UEFA Take Notice

January 2020 will mark seven years since a truly unique event occurred on a football pitch in a mid-season friendly between Pro Patria and Milan. Chances are no one, probably not even the players who took part, remember the much from the match - they only remember how it ended.

With 26 minutes on the clock, Milan midfielder Kevin-Price Boateng did a couple of stepovers and was about to dribble into the opposition box, before ​picking the ball up and volleying it towards the stands. The Ghanaian was incensed, furious, ripping off his Rossoneri shirt like Bruce Banner, and it was because the section of Pro Patria fans in that part of the stadium had been racially abusing he and his teammates.

As he walked off, he applauded all other parts of the ground, who almost instantly turned on the culprits of this chaos. Milan captain Massimo Ambrosini instructed the rest of his team to head back to the changing rooms, and the match was abandoned. An ultimately meaningless friendly, but a stand as strong as any seen in this sport.

On the eve of this event's seven year anniversary, it's time we see such action take place in a competitive fixture.

The abuse England players were subjected to in Bulgaria was vile, inhumane, and yet it was a situation that was totally predictable - Gareth Southgate's warning that he would not tolerate racism during the match was seen as offensive by Bulgaria's footballing authorities, yet here we are.

Ahead of the match in Sofia, Bulgaria had already been hit with a partial stadium closure (because some of their fans were racist in the past, too), but it made little difference as the ground rarely sells out. One way or another, racists would turn up purely to be racist, they would have no interest in whether their side won or lost. The prelude to every international break now seems to be dominated by talk of a revolt, of players leaving the pitch like Boateng did back in 2013. To this day, he's still the only high-profile footballer to do so and have a game called off because of it.

England's actions in Sofia were commendable; they recognised the situation quickly and sought to deal with it as UEFA wanted, the players making the final decision to play on after a tannoy announcement telling the racists to stop being racist. We can't criticise the players at the heart of the abuse and their response was admirable, but ultimately change won't happen if the authorities deem a reaction as well-behaved. Their protest was tidbit news on the continent, far from the eternal moment it's being billed as at home.

It's the depressing reality of modern football, of modern society, that all of the social media posts and campaigns in the world will fall on deaf ears until they hurt those in power themselves - it would have to damage the product for any true action to take place.

Any team that walks off in the wake of racial abuse and refuses to return will probably receive much harder sanctions than the side whose fans are the perpetrators - if England had walked off, for example, UEFA might have awarded Bulgaria the win, damaging the Three Lions' hopes of qualifying for Euro 2020. 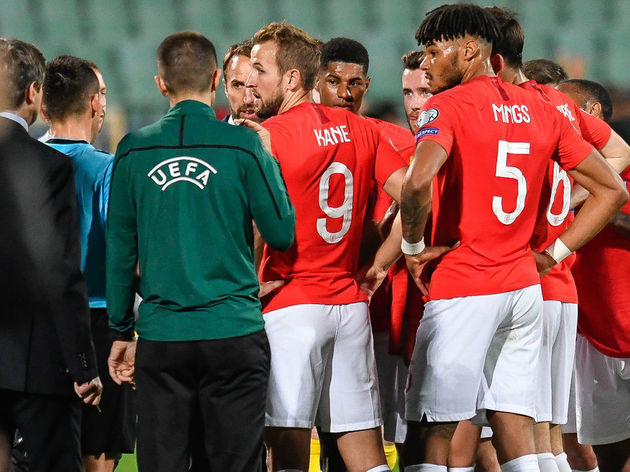 That's not to say that's why they didn't walk off at all, but any side willing to go above and beyond in a moral stand will know that they risk these penalties - let them be punished, this is bigger than football.

A side handed a forfeit will protest to the heavens, but the actions of leaving the pitch will give them huge strength, huge leverage on a global scale. It'd be the biggest story in world football, racism stood up to emphatically, every outlet talking about the disgrace of punishing the victims, every country reacting in fury. Right now, there's no defining action to back up the outrage, and so ultimately nothing will happen. As far as UEFA are concerned, what happened in Bulgaria was just another incident, nothing significant.

“As a governing body, I know we are not going to win any popularity contests," UEFA president Alexander Ceferin said in a statement. "But some of the views expressed about UEFA’s approach to fighting racism have been a long way off the mark.

"UEFA’s sanctions are toughest in sport for clubs and associations whose supporters are racist at matches. The minimum sanction is a partial closure of the stadium – which costs the hosts at least hundreds of thousands in lost revenue and attaches stigma to their supporters.”

Sorry, Mr. Ceferin, but it's going to take a lot more than "lost revenue" to fight this problem.

Let a team forfeit a game because they were the victims, let them be deducted points, boot them out of the competition - the storm it'd create would do far more for the cause. Football may only be a game, but it has the power to do so much more than that, to improve lives, to move society along. It'll always be intertwined with politics, and now is the chance to combat rising racism.