Emre Can was dismissed on the 14-minute mark after a bringing down Frank Liivak on the edge of the penalty area, instantly putting the visitors on the back foot.

It was a cagey first-half display and in truth, Estonia had the better chances throughout the first 45 minutes despite Germany having the lion-share of possession. Konstantin Vassiljev was the standout performer in the first half with two attempts, and Marco Reus saw his thunderbolt free-kick rattle the frame of Lepmets' goal from 25 yards out.

Germany started the second-half well, pressing forward and they were subsequently rewarded in the 51st minute when Gündogan capitalised on a lucky ricochet, hammering home into the bottom left-hand corner from the edge of the box.

Germany's second goal was a near carbon copy of the first, another lucky deflection falling to Gündogan who drove his effort into the bottom left-hand corner of the net.

Timo Werner then added a third, cutting inside from Gündogan's pass and finishing past Lepmets in the 71st minute.

A red card for the opposition would usually provide an advantage for Estonia, however today this was simply not the case. After Emre Can saw red in the 14th minute, Germany came together and went into overdrive, eventually seeing off a resolute host side who have picked up only one point in this campaign so far.

The home side only have themselves to blame after failing to capitalise on their one-man advantage, eventually allowing Germany back into the game whereby the four-time world champions illustrated their quality.

İlkay Gündoğan does it again for Germany, 2-0 ahead in Estonia. He has been so bright tonight , first to every ball in what’s been a lacklustre German performance. But he’s dug deep and gained his rewards . Marco Reus with the assist fantastic football from him #ESTGER

All in all another poor performance from Estonia, who remain winless and stay at the foot of Group C after seven games so far this qualifying campaign.

This game really could have been a real banana skin for Joachim Löw's side, especially with Can's reckless red card coming so early on in the match. The away side struggled to cope defensively and Estonia will be kicking themselves for not taking advantage of an uncharacteristically nervy looking German side. 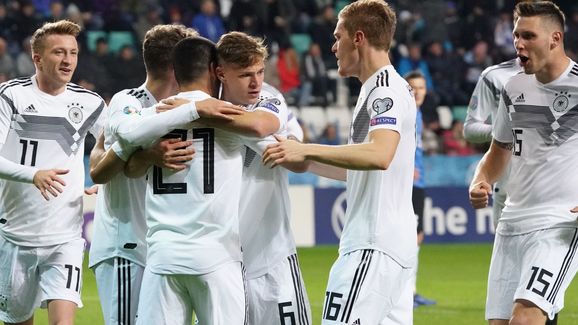 However, following the half-time interval, Germany came out the better side and got their reward six minutes into the second half. Gündogan's second came five minutes later and it was that goal which scuppered any chance of an Estonian comeback. The Sinisärgid looked defeated, and the third goal soon followed, completely deflating the home side.

The necessary win keeps Germany level on points with the Netherlands at the top of Group C, with Northern Ireland breathing down their necks in third.

STAR PLAYER - As you may have guessed, Ilkay Gündogan was the star performer for Germany on Tuesday as his two goals and assist allowed Die Mannschaft to (eventually) cruise past Estonia.

The Manchester City midfielder ran the show, transitioning well from defence to attack and made box-to-box runs which allowed him to get on the end of pullbacks from the wide area. The 28-year-old carried out his manager's instructions perfectly and Löw will be thrilled with his star performer.

Ilkay Gundogan delivers a masterclass for 10 men Germany in 3-0 win against Estonia.

İlkay Gündoğan does it again for Germany, 2-0 ahead in Estonia. He has been so bright tonight , first to every ball in what’s been a lacklustre German performance. But he’s dug deep and gained his rewards . Marco Reus with the assist fantastic football from him #ESTGER

The 59-year-old Germany manager will be happy with the way his side complemented each other, especially in the second half. Kai Havertz would drop deep to retain possession and looked extremely composed for a 20-year-old, whilst Marco Reus would run in between the half-spaces to give Havertz an option for the pass.

Germany return to action on 16 November as they face Belarus at home before finishing their campaign three days later against Northern Ireland. Two wins are a must as they hope for a slip up from Ronald Koeman's side.
Meanwhile, Estonia travel to Amsterdam to face the Netherlands at the Johan Cruyff ArenA in gameweek eight for their final (unlikely) chance for a win in this campaign.
Related Topics:
Transfer News