Hello darkness, my old friend. It's been a while since England lost a qualifying match of any sort - almost ten years to the day, to be precise. However, Gareth Southgate and his miserable men took us on a trip down memory lane, as a jaded England surrendered an early lead to lose 2-1 to Czech Republic in the Euro 2020 qualifying group stage.

Harry Kane converted from the spot after five minutes, and we all relaxed back into our chairs, expecting a straight-forward victory for the Three Lions. It was not to be, however, and the Czech's equalised shortly after, before going on to clinch a late victory.

While tournament football has stumped England for the last half-century, qualification has not posed too much trouble for some time now, with the Three Lions last defeat coming in October 2009 to Ukraine. Back then, World Cup 2010 was fast-approaching and Fabio Capello's England side had travelled to Ukraine in search of a routine victory, with qualification already in the bag. The evening did not go to plan, however.

England number one Rob Green (ah, those were the days) was sent off after 15 minutes, and England number two David James had to deputise between the sticks. The Three Lions fought bravely with only ten men, but Ukraine's to So, in hindsight, England were a bit short on keepers at the end of the noughties, huh? ​West Ham's Rob Green was the number one for Capello, and that would definitely not come back to bite him in any way, shape or form in the future. Particularly not in the World Cup. Especially not against USA. Nope.

Still, he ended his career with a Europa League medal, so who's laughing now? Rob, that's who. Glen Johnson wasn't half bad in his prime, but his 54 caps puts into stark perspective the incredible generation of options England currently have at full back compared to previous years.

The former Hammer earned himself a move to ​Liverpool, after impressing at Portsmouth before ending his career with relegation at Stoke City. The highs and lows of football. Ah wait, he did his knee ligaments and missed the tournament. Vintage England, that. Let's be honest, for whatever your opinion on John Terry, he was a brilliant defender. No matter what off-field palaver he got himself into, the ​Chelsea captain would worm his way back into England's starting XI, purely because he was an absolute warrior.

Never forget that he tried to stop a ball with his face after calling out Capello mid-tournament. Prime JT. Ashley Cole was as good a left back as they come, and there's nothing else to say. One of England's greatest defenders of all time, the former ​Arsenal and Chelsea man was Mr Consistent throughout his career, making 107 appearances for the Three Lions. Back to the odd ones. The post-Beckham days were very dark indeed, and England struggled to fill the sizeable hole that Goldenballs left behind.

There have been much worse players to have patrolled the right flank over the years, but Aaron Lennon wasn't the man to inspire the Three Lions to glory despite his raw pace and trickery. Criminally underrated to the point that he also became overrated, Michael Carrick deserved more minutes than most of the chumps who graced the centre of our pitch. What a waste.

Still he couldn't do anything to stop the rot against Ukraine. Ah Frank Lampard, arguably Chelsea's greatest ever player and all-time highest scorer - but couldn't hit water if he fell out of a boat in tournaments for England. Sigh. 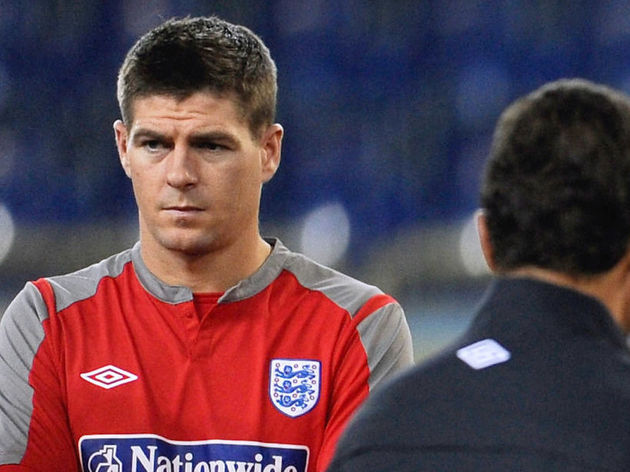 One of the very best centre-midfielders in world football, who got shunted out to the left-hand side of the England midfield. Says it all, really. It's....... Coleen Rooney's husband up front for England. The soon-to-be Derby County player's entire international career has been overshadowed by his wife's detective skills, and we're all fans of that - except Rebekah Vardy, perhaps. This man knew how to graft, and despite the banter over his goal record, Emile Heskey came out of World Cup 2010 as one of the only players to save any face. Fair play Emile, mate.

Only seven international goals though.

And now for the substitutes... Jeremy Clarkson wouldn't have been a fan of Jamo because he messed about with his hair a bit. Probably still better than Green, though. No need for any humorous swipes at James Milner, a model professional who probably deserved a more fruitful England career than he achieved. Good to see he's still tearing it up at the highest level too. Top work Jimmy. Keep an eye on John Terry in the coming months, Wayne mate. I have the feeling he's going to do you dirty. Rumour has it Matthew Upson still wakes up screaming and sweating profusely in the middle of the night, too frightened to close his eyes again in case he sees Miroslav Klose and ​Mesut Ozil leaving him in their dust. "Did you see the game against Germany at the World Cup? If you watch the fourth goal, when Mesut Ozil was up against Barry, it was like the hare and the tortoise," said Joey Barton about fellow professional footballer Gareth Barry.