​England travel to Bulgaria on Monday evening in need of a much-improved performance, following Friday night's shock 2-1 defeat to Czech Republic in Euro 2020 qualifying Group A.

The Three Lions sit joint-top of their group with the Czechs, after a Harry Kane penalty gave the visitors the lead, only for the home side to peg them back, and then bag a late winner to condemn Gareth Southgate's men to their first loss of the campaign and first in any qualification process since 2009. England need a victory to keep their rivals at bay in their quest to progress to next summer's tournament, and Southgate may be inclined to ring the changes after their lacklustre display.

Bulgaria are currently joint bottom of Group A with Montenegro, having claimed only three points in six matches. The hosts will certainly make it very difficult for a wounded England side, who will be desperate to bounce back from their recent disappointments and edge ever-closer to Euro qualification.

With Group A success on the horizon,

Southgate has some big decisions to make ahead of Monday evening's clash, as the 49-year-old was left enormously frustrated by his side's lackadaisical performance against Bulgaria. The former Middlesbrough boss is likely to make some alterations to his starting XI, particularly to a defence which once again looked far from sturdy.

​Trent Alexander-Arnold is the favourite to regain the right-back spot from ​Kieran Trippier, and Ben Chilwell may replace Danny Rose on the left side of defence. Joe Gomez could also partner ​Harry Maguire to shore up a struggling England backline. 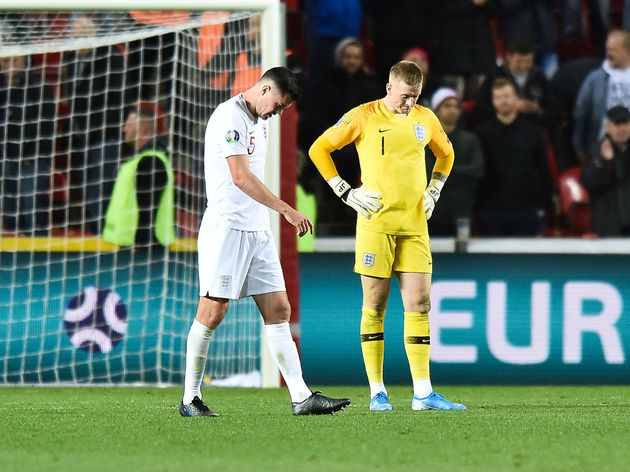 Mason Mount showed fleeting moments of his quaity in midfield despite his teammates' lethargic contributions, and the ​Chelsea man may get the nod once again, while ​Tottenham Hotspur's Harry Winks could come in for Declan Rice.

Bulgaria have been handed a boost before the England fixture, as captain Ivelin Popov should return after missing out against Montenegro, but defenders Strahil PopovVasil Bozhikov ​England are the favourites for victory in Monday evening's clash with Bulgaria, and their recent head-to-head record backs up this prediction nicely. England are unbeaten in their last eight encounters with the Bulgarians, winning the three most-recent matches by three goals or more.

The Three Lions beat Monday's hosts by four goals in September, thanks to a ​Harry Kane hat-trick and a sensational performance by ​Raheem Sterling. The two sides also met in 2011, when a ​Wayne Rooney brace and a goal from Gary Cahill gave the visitors a 3-0 victory. The Three Lions conceded three goals at home to Kosovo, a match in which the hosts almost allowed the away side back into the game despite being 5-1 down at one point. England also stumbled against Netherlands in the UEFA Nations League semi-final, conceding two extra-time goals in self-destructive circumstances.

Bulgaria are not in the best of form themselves, their draw against Montenegro ending a wretched run of four straight defeats. The Lions haven't won a match since they beat Cyprus 2-1 in October 2018, and they'll be desperate to break their year-long duck. England will be hurting and desperate to make amends following their surprise defeat on Friday night, and Southgate's men will hope to recapture their form of old against their suffering opponents.

Bulgaria are in a poor run of form and although they picked up a point against Montenegro, the Lions have been completely beleaguered for the past 12 months and are in dire need of a win.

Ultimately, England's attacking firepower should prove too strong for their hosts, and the Three Lions will demonstrate that their recent loss was a minor blip on the road to qualification success.