​AC Milan has been home to some of football's greatest minds and revolutionaries.

most recent to depart

Here's our ranking of all the Milan bosses since Allegri's departure - minus caretaker manager Mauro Tassotti. When Pippo was appointed boss in July 2014, many didn't foreshadow what was about to play out in the 2014/15 season. Many believed Incredibly, despite overseeing just seven Milan fixtures, Brocchi left the club at the end of the 2015/16 season on his own accord, departing for Brescia.

Brocchi took over from Sinisa Mihajlovic in April 2016 after a five-match winless run left the club sixth in the table.

The former youth team coach won just two of his seven games, collecting eight points from the six games he was in charge, leaving Milan seventh and out of the Europa League places.

Oh, and if that wasn't enough, he only went and lost the Coppa Italia final that Mihajlovic got them to, albeit they were beaten by a great Juventus team in extra-time. The newbie in Milan's managerial revolving door, there was great expectation placed on Giampaolo coming into the current campaign.

Adding Giampaolo to a young core of players that included Alessio Romagnoli, Franck Kessie, Lucas Paqueta and Krzysztof Piatek, along with summer signings Theo Hernandez and Rafael Leao, Milan were set for the future with their Swiss coach...right?

After four defeats in seven games, Giampaolo was sacked. Not quite the long-term solution the Milan faithful were after.

I Rossoneri surrendered a lead at Torino and were played off the park in home defeats to Inter and Fiorentina during his short stint in charge. It may have been a little early to let Giampaolo go, but the early signs weren't promising. Another Milan legend who didn't last very long at the helm. Seedorf took charge of just 22 games at the club, being replaced by Inzaghi for the start of the 2014/15 season.

The Dutchman was brought in midway through the season after Allegri had guided Milan to 11th in his fourth year at the club. He was brought in in a tough situation and the job he did was by no means disastrous.

Seedorf won half the games he was in charge for, with wins in the Milhajlovic's reign in Milan wasn't great nor terrible, however, after a summer window which saw Andrea Bertolacci, Carlos Bacca and Romagnoli arrive at the club for big-money fees, the expectation was for the Serb to guide Milan closer to the Champions League

However, Milhajlovic's Milan side peaked at sixth in Serie A and the former Sampdoria boss was sacked in April following a 2-1 home defeat to Juve

So, why does he rank relatively high on this list? Two words - cup run.

Milhajlovic helped Milan to their first Coppa Italia final since 2003 and although their opponents on the way to the final were quite timid - Perugia, Crotone, Sampdoria, Carpi and Alessandria, a deep cup run in Italy's premier cup competition has to count for something.

Forget the fact that he was sacked before the final and Milan ended up losing it anyway. The now Fiorentina manager was pretty successful during his 16-month reign at San Siro, guiding Milan to their first trophy since 2011 with the mighty Supercoppa Italiana and helping I Rossoneri return to European competition for the first time since 2014 after a sixth-place finish in Serie A

However, during the 2017/18 season - Montella's second campaign - he failed tactically. Having brought in the likes of Leonardo Bonucci, Andre Silva, Ricardo Rodriguez and Hakan Calhanoglu in a window that was meant to be the start of Milan returning to its 'glory days', Montella flopped.

He struggled to find the right formation for his group of players and never found a consistent starting XI. This led to a sub-par start to the season and 14 games in, Montella was sacked after a bore draw at home to Torino.

So, despite bringing tangible success back to Milan, Montella didn't quite have the same impact as the next man on this list. 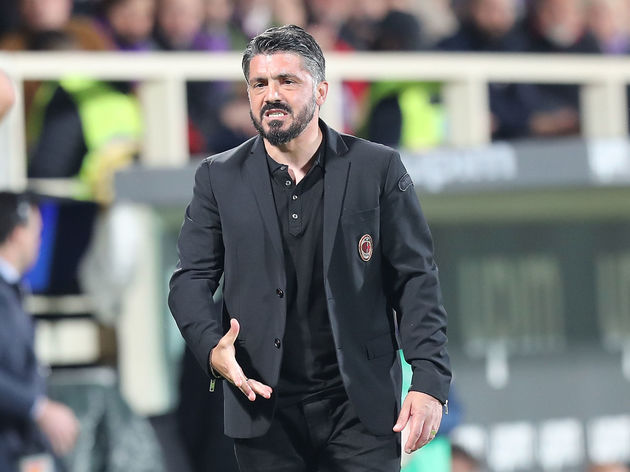 Being atop this list isn't exactly a major achievement, but Gattuso certainly deserves some plaudits for the job he did at his former club.

'Rino', unsurprisingly, connected with the Milan faithful like no other, overseeing 40 Milan wins from 82 games.

I Rossoneri lost just four times under his leadership during his first season, a season which saw them reach the last 16 of the Europa League and the final of the Coppa Italia - which doesn't have to be talked about.

Although he may have lacked the tactical acumen and man-management skills to succeed in the long run, 'Ringhio' employed some much-needed passion and toughness to Milan, whilst undoubtedly going the closest to rediscovering their identity since Allegri's departure.

The stress the job put on him forced him to resign at the end of last season, but, during Gattuso's spell in Milan, only Juve (2.44) and Napoli (2.13)