The Lionesses ran the United States very close in the semi-finals of the competition, but defeat to Sweden in a playoff that manager Phil Neville unwisely branded a ‘nonsense game’, followed by poor results against Belgium, Norway and Brazil brought things crashing back to earth. 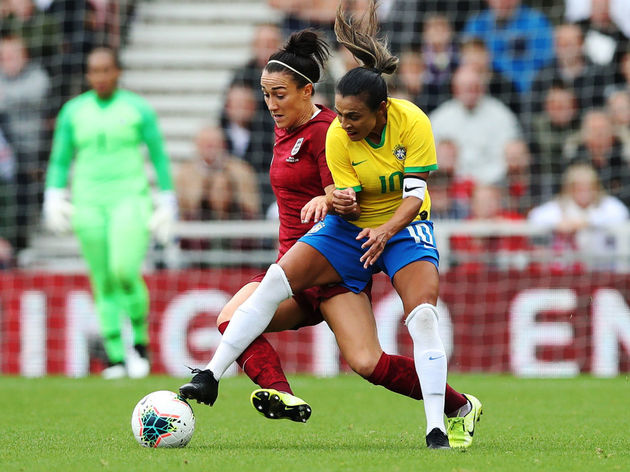 The Sweden loss was perhaps understandable in the circumstances, in the same way that England capitalised on German malaise to claim third place four years earlier. The performances that followed – snatching a 3-3 draw against Belgium and being outplayed by Norway and Brazil, the latter in a packed Riverside Stadium for a first home game since the World Cup – were not.

Even victory over Portugal, a team that England should be capable of beating by several goals, was not good. The much needed and overdue win only came as a result of a scrappy 72nd minute tap-in after a freak howler by Portugal goalkeeper Patricia Morais.

England dominated possession and had 19 attempts. But only five of those were on target and they were unable to make their massive advantage count. What’s more, the Lionesses almost blew it later on when Portugal’s Claudia Neto hit the bar with a free-kick. 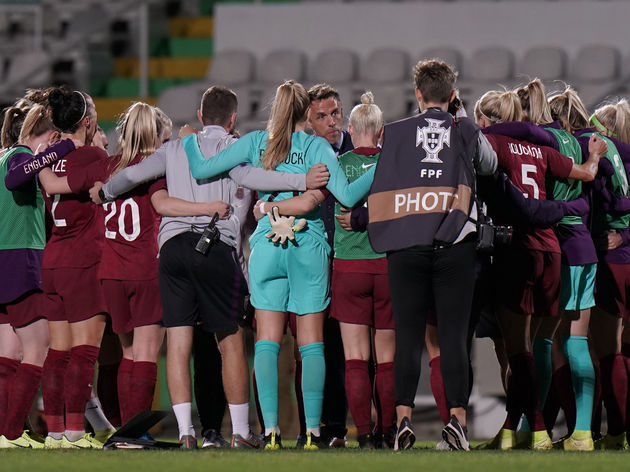 The first half of the game was littered with the same mistakes and sloppiness that have characterised England under Neville. They were extremely fortunate that such problems weren’t exposed at the World Cup in games against Scotland, Japan, Cameroon, even Norway, but the issues have certainly come home to roost in the games since – home defeats against Canada and New Zealand before the tournament suggested not everything was quite there.

Neville asserted during the World Cup that the system is ‘non-negotiable’. It is a problem.

What is also a problem is England’s complete inability to defend set pieces or balls into the penalty area. It has become such a facet of England’s makeup, that opponents have learned to exploit it, and they are doing so…successfully.

After the final whistle in Setubal on Tuesday night, Neville was adamant that the performances against both Portugal and Brazil were ‘outstanding’. To every other set of eyes, they were not. He also added that he is ‘pleased with the direction that we're going in’. That direction is downwards.

Neville has said that he welcomes fair criticism, but his relationship with the media is ​starting to deteriorate, seemingly because he has been unable to handle precisely that.

It was clear how much Neville was desperate to win in Portugal. He had earlier declared that Jordan Nobbs, not long back from a serious knee injury, would be rested, but the Arsenal midfielder appeared from the bench after an hour. Steph Houghton also needlessly played.

I’m just beyond understanding why he’s saying this at this point. I’ve spoken to journalists in Lisbon, journalists watching at home, fans at home, no one is enjoying these matches and no one thinks the football is good.
He’s either lying or deluded & I don’t know which is worse. https://t.co/xBgQgUErt3

Neville had been a controversial appointment by the FA when he first hired as England boss in early 2018. He had no experience of working in women’s football, while his coaching CV amounted to little more than ill-fated spells as an assistant at Manchester United and Valencia

It is, however, important to note that the six-time Premier League champion did bring positives to the England setup at a time when it was most needed. Neville took over off the back of a period in which the Lionesses reached two semi-finals in two years and were on the cusp of making the transition from one of many international sides with promise to one of the select global elite.

His determination to drill a winning mentality into a group of already talented players was vital for ensuring they could take that step. It meant that England went into the World Cup as the third best side in the FIFA rankings and one of the favourites to lift the trophy. The fact that his team came home from France empty handed was not a failure, as the team at least proved themselves by reaching a second consecutive global final. It was more important than 2015 as there was expectation attached – four years earlier had been an overachievement.

But given England’s marked slump since and the valid and important questions about tactics and coaching that are now being asked, perhaps Neville has taken the Lionesses as far as he can. His initial impact may also be wearing off, as a column from The Athletic’s Kieran Theivam notes that the coach himself feels some players have ‘fallen into a comfort zone’.

Interesting this. Best way to shake players out of a comfort zone (for me)? Don’t play them. No one should have a guaranteed spot. https://t.co/INQFGM6WXT

A change won’t happen so close to the 2020 Olympics in Tokyo. The FA almost certainly won’t risk jeopardising the chance of a global medal by shaking things up before then.

But with Euro 2021 on home soil presenting a best chance yet of winning a first major tournament, the decision makers ought to take some time in autumn 2020 to seriously consider the direction in which they want England to be heading.

Phil Neville has had his time and the gig is up. Now, the Lionesses deserve better.