Andrés Iniesta: The Enigmatic Architect Behind the Best Barcelona Team in Modern History

Andrés Iniesta is number 5 in 90min's Top 20 Greatest Footballers of the Decade series. Follow the rest of the series over the course of the next week.

Barca’s young guns are taking on Argentina’s Rosario Central and it’s a tense and nervy affair. With the game tied at 1-1 and the final whistle moments away, the deadlock is broken. An overhit cross bounces past the hapless Canalla goalkeeper and is picked up by a blue and garnet shirt on the byline.

The ball is then rolled back to the edge of the box, into the path of the on-rushing Barcelona captain. The ball is bobbling, it’s the 92nd minute and there’s still a goalkeeper and two defenders on the line to beat.

Without breaking stride, the Barca number four fires an unstoppable shot into the top corner, before wheeling away to be met by his pitch-invading team mates.

Guardiola smiles and turns to a 19-year-old Xavi who is also in the sat watching the scenes unfold. “You will retire me, but this kid will retire us both.” He was right. The Barcelona captain and man of the match that day in 1999 was Andrés Iniesta, the understated, enigmatic genius who would go on to dominate the club’s midfield for the next 15 seasons.

Many of the tropes that would come to characterise Iniesta’s career were present that day. Even at just 15 years of age the Spaniard was capable of making the sublime look simple and impossible look even simpler. 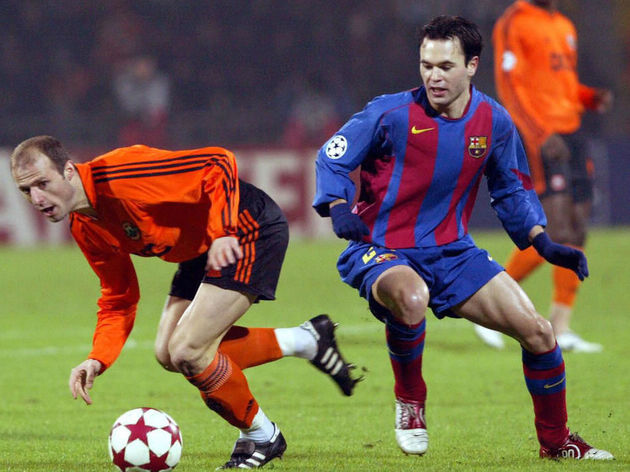 He glided past Rosario Central players like they weren’t there, moving his hips like a salsa dancer in order to create the space to play his next pass. Always keeping things simple. Clinical but never sterile - that was his game.

The poster child of the Barcelona’s famous La Masia youth academy, where technical brilliance is prioritised over everything else in 1999, it’s no surprise that he found himself in the first team just two years later.

His full-debut would come in October of the 2002/2003 season, in the third month of Louis van Gaal ill-fated five months back in charge at Camp Nou. Despite the Dutchman’s second spell as Barca boss ultimately proving to be a failure, Iniesta has always spoken warmly about the influence that the Iron Tulip had on his burgeoning career, describing him as his “most important manager,” in an interview with Mundo Deportivo. Following Van Gaal's departure, the midfielder’s chances in the first team were limited. Barcelona were going through a painful transitional phase at that time anyway and when Frank Rijkaard arrived at the club at the start of the summer of 2003, the side were without a La Liga title in five seasons.

Rijkaard was initially unsure about Iniesta, but that soon changed with the Spaniard missing just a solitary game as the club’s long wait for a league title finally came to an end.

“I played him as a false winger, central midfielder, deep midfielder and just behind the striker and he was always excellent.,” the Dutchman recalled years later - testament to Iniesta’s perfect technique and decision making. The following season would bring more success with Barca romping to a landmark La Liga and Champions League double. The midfielder’s fingerprints were all over the latter.

Introduced as a second half substitute with his side 1-0 down to 10-men Arsenal in the final, Iniesta provided Rijkaard’s team with a much needed creative spark.

Buzzing around the midfield like a wasp near an open Coke can, Iniesta finally unlocked the stubborn Gunners’ defence with a probing and perfectly weighted 15-yard pass to Henrik Larsson. He then found Samuel Eto’o who slotted home at the near post. It would go down as Larsson’s assist - and the Swede would also set up Juliano Belletti’s winner - but in reality the goal was the product of Iniesta. It’s a familiar tale.

When compared with some of his peers, Iniesta’s goal and assist numbers seem rather unimpressive - especially to the stats-obsessed footballing world of the 21st century. This has often led to his brilliance being misunderstood and underestimated, which is ridiculous considering the monumental role that he has played in some of Barcelona and Spain’s greatest triumphs.

For instance, flash forward three years from that night in Paris to the 2009 Champions League semi-final. It’s the second leg, Barcelona are 1-0 down and have been the benefactors of a string of contentious refereeing decisions at Stamford Bridge. They are also heading out. They need a hero. Deep into injury time the ball is rolled across the box by a young Lionel Messi. It is met by the wildly swinging boot of Iniesta and ends up nestling in the top corner. In many ways this goal is the antithesis of everything the midfielder stands for. There’s no guile, no trickery, no sublime piece of skill. He has simply swung his boot at it and hoped for the best. BOOM, right in the stanchion.

Those looking for another iconic moment that better encapsulates Iniesta’s brilliance in a neat bundle, should look no further than the goal he scored in the 2010 World Cup final. Deep into injury time, the midfielder intelligently peeled off from the Dutch defence and received a pass from Cesc Fàbregas.

It’s not a good pass. It’s got too much pace on it and his first touch forces the ball to spurn up into the air. No problem for Iniesta as he produced a wonderfully controlled half-volley to win Spain the World Cup. These are just flashpoints in a career that never stopped simmering. The thing that made Iniesta so special was his consistent presence in one of the best teams in Barcelona’s illustrious history.

After he had set his side en route to Spain’s first ever treble with his goal against Chelsea in 2009, the midfielder continued to the epicentre of Pep Guardiola’s tiki taka dynasty.

Sir Alex Ferguson would describe this team as the best he’d ever faced, after they defeated Manchester United in the 2011 Champions League final.

Iniesta - and his partner in crime, Xavi - were the ones who made this incredible side tick.

“I don't think Iniesta and Xavi have ever given the ball away in their lives. They get you on that carousel and they can leave you dizzy,” Ferguson said after the game. 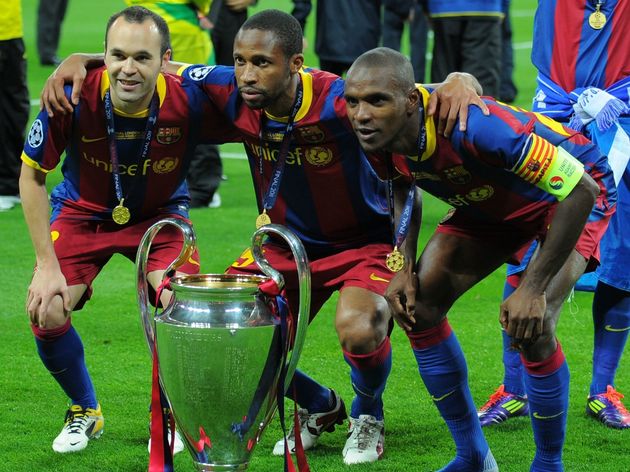 Guardiola - the man who had watched him play as a teenager in the Nike Premier Cup ten years earlier - was equally effusive in his praise.

“He doesn’t dye his hair, he doesn’t wear earrings and he hasn’t got any tattoos. Maybe that makes him unattractive to the media but he is the best,” the Barca coach said of Iniesta.

This was the midfielder at the peak of his powers but he still had plenty more to give after playing United off the park.

By the time the diminutive playmaker had made the last of his 674 appearances for Barcelona, Iniesta had won another Champions League in 2015, earned a standing ovation at Santiago Bernabeu for his man of the match display in a 4-0 win for the visitors that same year, and lifted another four La Liga titles, in 2013, 2015, 2016 and 2018.

The images from that final game, a 1-0 win over Real Sociedad, are genuinely moving.

Substituted in the 80th minute, Iniesta - now sporting an almost completed receded hairline - went around to each of his teammates that he conquered the decade with - Busquets, Pique, Messi - and gave them a warm embrace. Xavi was also in the crowd watching on, just like was in 1999 Nike Cup final. Tears were shed after the game. And that was that, Iniesta rode off into the sunset to begin his Japanese adventure with Vissel Kobe. But he’ll be back. How could the man who is Barcelona personified stay away? Maybe he’ll be the man to retire Pep Guardiola as a manager as well?

​Number 6 - Luis Suarez: The Uruguayan Heel Who Never Bit Off More Than He Could Chew