Atletico Madrid fell to their third goalless draw in four La Liga games as Real Valladolid came away with a well-deserved point at Estadio Jose Zorilla on Sunday.

Excitement was certainly at a premium for the first 30 minutes, but it was This game was the first ​La Liga match in which the trio of ​Diego Costa, Joao Felix and ​Alvaro Morata all started alongside one another. It was perhaps the strongest lineup possible, so surely it couldn't disappoint, right? Wrong.

Something just didn't work here. ​Atletico looked so uninspiring in attack and they struggled to create anything of note throughout the entire game, just as they have been guilty of doing away from home this season. Felix looked so isolated on the wing, and the two strikers desperately needed more help from somewhere.

I hate the fact that Atletico can play beautiful football but they can also give you games like this where you just wanna fall asleep. Ugh.

Oke we buy 126 million euro player,but you cant use him because you dont know how to use him

Diego Simeone's system has faced plenty of criticism during this poor run of form, and rightly so. Felix's best work is not as a winger, but as a second striker. He needs to be moved further forward at the expense of Costa, who has a nasty habit of falling into anonymity when you need him most. 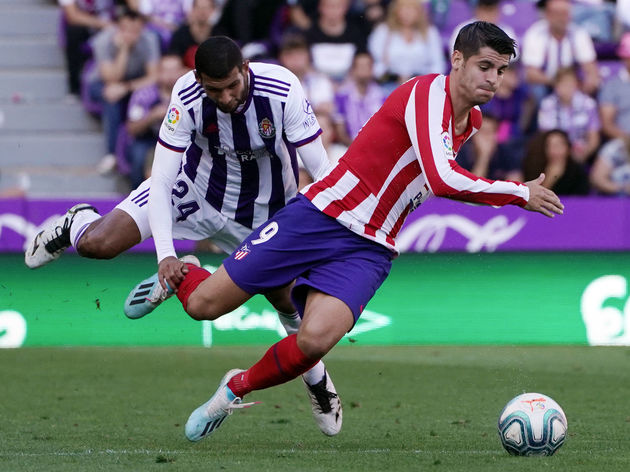 It didn't take a lot to stand out as part of this underwhelming Atletico side, but Morata should be fairly proud of his individual performance nonetheless.

Simeone's men didn't create much, but everything good seemed to involve Morata. He perhaps would have created more had it not been for Valladolid's obsession with fouling him, but that proved just how wary the home side were of Morata.

Morata with the ball is a threat. He doesnt dwell on it for too long, and that's the kind of forward thinking we need more of between our strikers. Again with the ball, draws another foul and another yellow.

Morata is the ONLY, THE ONLY player who looked like scoring today and he has now been taken off and COSTA IS STILL ON THE PITCH.
I'm absolutely fuming and my account might get suspended at this rate.

This was by no means an elite performance from the Spaniard, who should have done better with at least two opportunities, but he should still be satisfied with his showing. Why Simeone decided to substitute him instead of Costa is anyone's guess.

After the international break, Valladolid hit the road to face Athletic Club on 20 October.

As for Atletico, they will use the break to prepare themselves for the visit of Valencia on the 19th, and fans will be desperate to see their team get back to winning ways.