Bayern Munich made it two wins from two in style on Tuesday night, as they beat Tottenham 7-2 at the Tottenham Hotspur Stadium.

After a boisterous start to the game, it was Tottenham who struck first inside 12 minutes. Corentin Tolisso's weak pass was picked up by Moussa Sissoko, who threaded it through to Son Heung-min as the South Korean hit it past Manuel Neuer to put the hosts in front.

However the German champions took just three minutes to level it up again, thanks to a sumptuous strike from Joshu Kimmich. Jan Vertonghen's clearance only went as far as Kimmich, who picked it up on the edge of the box, cut back and curled it into the bottom corner.

Bayern made sure they went into half-time on top, as Robert Lewandowski fired Die Roten ahead right at the end of the first half. Facing away from goal as he picked up possession, the FCB talisman turned and fired it hard and low into the back of the net to turn it around.

Bayern began the second half as they ended the first, as Serge Gnabry struck twice within ten minutes. His first was a mazy run through the defence and a tidy finish, while his second was pure precision as he struck it in off the inside of the post to put Bayern in cruise control

Tottenham had the chance to reduce the deficit, as they won a penalty thanks to a foul on Danny Rose. Captain Harry Kane stepped up and made no mistake from the spot, finding the back of the net despite Neuer's best efforts to keep him out.

Why did Niklas Süle do Serge Gnabry like that?! 

Who kicked his hat-trick ball into the crowd?!  pic.twitter.com/hyeK6ditzD

Gnabry secured his hat-trick with seven minutes to play, as he plucked Thiago's long ball out of the air and slotted home to earn his treble.

Lewandowski added insult to injury to make it six minutes later, before Gnabry got his fourth as Bayern rounded off a truly incredible performance to consign Tottenham to one of their worst home defeats in the club's history.

See here for our full ​run down of how Twitter reacted to one of the craziest games in recent memory. It was a must-win game for ​Tottenham, who needed to capitalise after their 2-2 draw at Olympiacos two weeks. They couldn't have started any better, beginning with great intensity and drive as they took the lead through Son. Yet, from then on, they seemed to lose that drive.

Losing their lead three minutes later, Spurs were exposed in defence time after time by Bayern's quick and ruthless attack. Their loss of concentration saw them go into the break behind, before a distastrous start to the second half saw the game put beyond them as Bayern made it four. While Spurs pulled one back, it was too little too late, as Bayern added another three.

What is frustrating for Tottenham is that they could've got something from the game, but they didn't make the most of their early dominance and flurry of chances. While good Bayern defending kept them out at one end, it was vulnerability and a lack of pace and structure at the back which cost them, as Spurs must learn their lessons if they want to emerge from Group B. STAR MAN - It's hard to pick anyone who deserves to be the star man for Tottenham, but Moussa Sissoko was impressive in midfield. While it was far from a perfect performance, he worked hard from start to finish and won the ball back time after time for the hosts. How can you describe that ​Bayern Munich performance? Ruthless, relentless, Bayern. It was surprising to see them go behind early on, but the German champions showed character to get straight back into the game. From then on, the floodgates opened bit by bit, as FCB's attacking power was too much for Spurs.

Lewandowski's goal helped them go into the break with confidence, before they kicked off the second half with two wonderful goals. Their defensive display was just as important in securing the win, but it was all about the beautiful attacking football that saw them ship seven in London.

Bayern well and truly left their mark at the Tottenham Hotspur Stadium, as they tore apart last year's Champions League finalists on their own turf. It was a determined, outstanding, beautiful performance from the Germans, who have sent out a huge statement to the rest of Europe.

STAR MAN - There were a lot of outstanding performers for Bayern, but only one man will earn all the praise. ​Serge Gnabry was absolutely outstanding, in a ruthless display where he exposed Tottenham's defence time after time and was clinical as he scored four goals for Bayern.

It was a stunning display from Gnabry, who put in what will be a classic ​Champions League performance. Special mentions must also go to the ever-excellent Manuel Neuer in goal, Robert Lewandowski up front and Joshua Kimmich in midfield.

Man of the match: 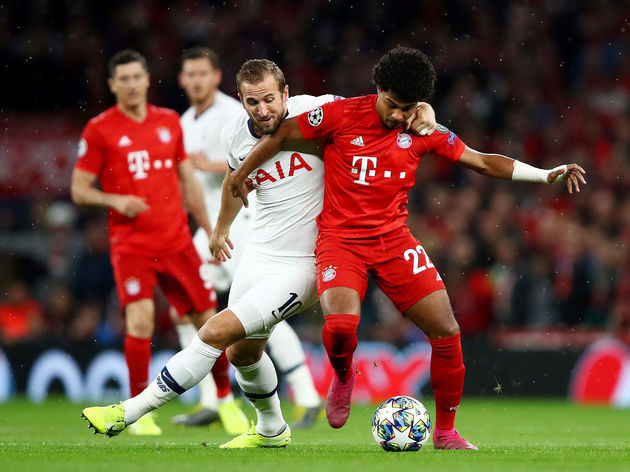 Tottenham are on the south coast next, as they face ​Brighton in the ​Premier League on Saturday. They return to north London two weeks later, as a winless ​Watford are the visitors to the Tottenham Hotspur Stadium on 19 October.
Bayern Munich are back in Bavaria this weekend, as they welcome Hoffenheim to the Allianz Arena on Saturday. Die Roten then travel to Augsburg in two weeks' time, facing them on 19 October after the international break.
Related Topics:
Transfer News