Gareth Bale: The ‘Cursed’ Talent Who Went on to Conquer Europe Four Times

Gareth Bale is number 9 in 90min's Top 20 Greatest Footballers of the Decade series. Follow the rest of the series over the course of the next two weeks.

Having exploded onto the scene as teenage star for Southampton in the Championship, earning a reputation as one of the most promising young talents in England, Bale found Premier League life tough when he joined Tottenham Hotspur shortly before his 18th birthday in 2007.

It became a running joke that Bale was ‘cursed’ and that whenever he played in the Premier League, Spurs would fail to win. In fact, in his first 24 league appearances for the club spread across a period of just over two years, Bale never tasted victory in a league fixture even once. Spurs were even willing to let him go, with Nottingham Forest thought to have agreed a loan deal with an option to buy in January 2009. It was apparently only Bale’s determination to fight for his place in north London that saw him stay. Imagine how different things could have been…

He had, of course, been on the winning side in other competitions, both at home and abroad, but the Premier League was a different story. Mentally, it was weighing down a once prodigious talent.

In October 2009, then Spurs manager Harry Redknapp spied an opportunity to put an end to it once and for all. A 20-year-old Bale had missed the first few games of the season through injury, but with Spurs winning 4-0 against Burnley, Redknapp put the youngster on for the final few minutes. Robbie Keane scored once more before the end to make it 5-0, and Spurs had won with Bale on the pitch.

It was a simple gesture, but mentality and superstition are huge in professional sport.

“I thought we needed to break that hoodoo,” Redknapp said of Bale’s brief involvement at the time. “It’s affected him I think, but he played well in the Carling Cup match before.” 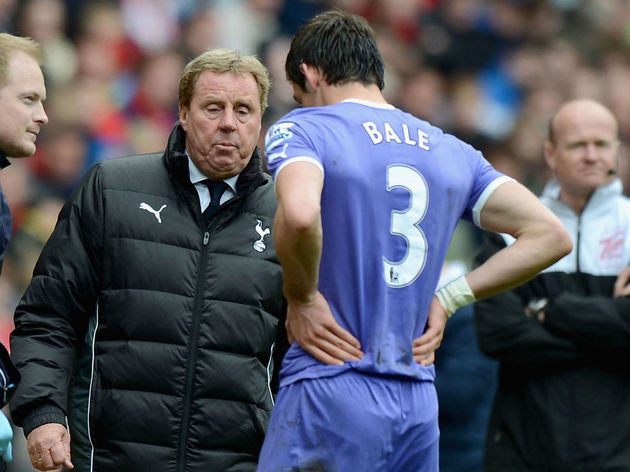 Bale had played his six minutes of that landmark win on the wing, but Redknapp made plain that he still saw the player’s long-term future in his usual left-back position. It was where he’d shone for Southampton and it was indeed where he played for much of the rest of the 2009/10 campaign – the season in which Spurs finally secured Champions League qualification.

It was as 2009/10 neared its conclusion that Bale, a regular starter since January, began playing further forward more frequently. He started to add goals and assists, getting eight in the final 12 Premier League games – Spurs won nine of those fixtures to beat Manchester City to the elusive fourth place, and that momentum carried into a defining 2010/11 season.

Still wearing the number three on his back, Bale did play as a left-back a handful of times that year, but there was no question about it – he was now a flying winger.

People reminisce about the ‘birth’ of Gareth Bale coming on 20 October 2010 in a Champions League game against then holders Inter. Spurs lost the game 4-3 after going 4-0 down inside the first half and seeing goalkeeper Heurelho Gomes get sent off in the opening stages, but it is memorable because of what an electric Bale did after the interval. The emerging Welsh superstar was unplayable in those 45 minutes at San Siro. He was up against Maicon, generally recognised as the best right-back in the world at that time, but the poor Brazilian was arguably never the same after that evening.

Bale scored a sensational hat-trick – two of the goals were almost identical – showcasing his pace, drive and finishing ability. “Even in the first-half he gave the right-back, who is one of the best in the world, a torrid time,” manager Harry Redknapp remarked afterwards.

Bale’s transformation and rise was rapid to say the least, as if something had clicked mentally and he was suddenly aware of his greatest assets and how to use them to best exploit his opponents. It is also important not to forget that night in Milan came less than two years after Spurs were prepared to write him off and let him join a club in the Championship.

That game against Inter is known as the watershed moment. But it had been coming. We’ve already heard about his impact towards the end of 2009/10 in helping Spurs qualify for the Champions League, while a much less talked about Bale performance in a Champions League playoff eight weeks before facing Inter is what got Tottenham in to the group stage in the first place. Spurs were trailing 3-2 on aggregate against Swiss side Young Boys and faced exiting the Champions League before their journey had even started. But Bale was superb in the second leg, assisting three goals and later winning a penalty in a comprehensive 4-0 win.

Aged 14, Bale had clocked 11.4 seconds in the 100m, while he also excelled at middle distance and long distance running. Those attributes were all now proving invaluable to his football.

Bale finished the 2010/11 season with the PFA Players’ Player of the Year award. He enjoyed another strong campaign the following year, scoring a few more goals. Then came 2012/13, during which he found a whole new level. He netted 21 times in the Premier League and had 41 combined goals and assists in 44 appearances across all competitions. Another PFA gong came, while he also landed the PFA Young Player of the Year prize and scooped the FWA Footballer of the Year.

He had become a genuine world class game changer. A performance against West Ham in February 2013 particularly stands out. Bale had already scored, but the game looked to be heading for a 2- draw until the Spurs number 11 intervened and lashed home a stunning winner from distance. Real Madrid had taken notice and Bale joined Los Blancos in a world record £85m transfer in the summer of 2013, surpassing Cristiano Ronaldo as the most expensive player in history.

Bale’s time in Spain has been nothing short of a rollercoaster. He has taken the brunt of fan wrath, injuries have ultimately restricted him, and more recently endured a troubled relationship with iconic coach Zinedine Zidane. But, quite simply, Real would not have enjoyed the same success and European dominance they have done over the last six years without Bale.

In his debut season at Real, the club won Copa del Rey and Champions League trophies, the latter the coveted Decima that had eluded them since 2002. Bale was decisive in both triumphs.

In the domestic final against Barcelona, it was his late solo run from the halfway line that secured the trophy for Real, still only their second title in the competition since 1993. Later, in the Champions League final, he scored the decisive first goal in extra-time and became only the third British player to win it with a foreign club this century. Bale has been criticised at Real for not taking his game to another level – he has never been more prolific than in his final season with Tottenham – and not taking over the mantle from Cristiano Ronaldo. It is unfair if failure to surpass arguably the greatest player of all time is how he will be remembered, because Bale is still one of the absolute best of his generation.

In the 2016 final, a repeat of two years earlier against Atletico Madrid, it was his flick-on that assisted Real’s opener for Sergio Ramos. Bale then stepped up and converted in the penalty shootout that saw the club become the first to retain the trophy in the Champions League era. He had the mental strength and drive to put an injury plagued season behind him to do so.

More injuries restricted him to 13 minutes of the 2017 final against Juventus as Real won again, but 2018 against Liverpool was another Bale masterclass in big game impact. Despite being out of favour with Zidane, he came off the bench with the final poised at 1-1 and scored twice in half an hour to win the game for his team – the first of which was an impossible overhead kick that rivals his coach’s iconic volley in 2002 as the greatest goal ever scored in a European Cup/Champions League final. It would be amiss to discuss Bale’s career without at least also mentioning his role as national talisman for Wales during a spectacular underdog Euro 2016 journey to the semi-finals.

History remembers winners and Bale is a winner. Four Champions League medals attest to that.

For a skinny left-back once a ‘jinx’, it’s a level of achievement words alone cannot capture.