​As well all collectively exhale and thank the lord that Manchester United vs Arsenal is finally over and we can resume our everyday lives, let's look back at some of the better action matchday 7 of the Premier League offered.

Leicester walked all over Newcastle, Manchester City and Liverpool kept on rolling in the title race, and Tottenham overcame defensive deficiencies to beat Southampton.

Here's 90min's team of the week for matchday 7. 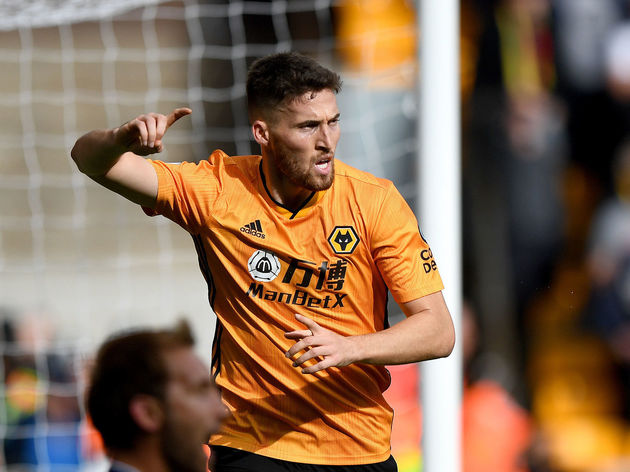 Vicente Guaita (GK) - The Spanish stopper's remarkable record of having zero errors leading to goals conceded just keeps on rolling, as ​Crystal Palace saw off the challenge of ​Norwich with a 2-0 win at Selhurst Park. Having consistency between the sticks will certainly help Palace, particularly on a weekend rife with goalkeeping mistakes.

Matt Doherty (RB) - ​Remember FPL legend Matt Doherty? He's back! In goalscoring form! The Irish right-back has endured a tough start to the season, as with almost everyone at ​Wolves, but his goal against ​Watford showed he hasn't lost that ability to arrive in the box and come up with important moments at Molineux. Can he and his teammates kick on?

Virgil van Dijk (CB) - Imperious and dominating, this was just another weekend in the life of Virgil van Dijk. ​Liverpool had to be at their defensive best in order to stop ​Sheffield United from creating clear-cut chances, and that's exactly what they were at Bramall Lane. The Blades were essentially blunted, with Van Dijk getting a foot or his head on everything.

John Egan (CB) - At the other end, Sheffield United were largely solid despite letting Jurgen Klopp's side in a couple of times, but these are the European champions after all. Jack O'Connell and Chris Basham did a decent job as the overlapping centre-backs, but John Egan stood out as their primary defender, showing true leadership and Premier League quality.

Aaron Cresswell (LB) - Arthur Masuaku's loss is Aaron Cresswell's gain at ​West Ham, as he makes our team of the week once again. A goal against ​Manchester United was followed up with a goal against ​Bournemouth in their 2-2 draw at the Vitality Stadium, equalising for the Hammers and claiming a big point away from home. Wildred Ndidi (DM)​ - Did he make it? Ndidi did. The stock of ​Leicester midfielder Wilfred Ndidi continues to rise, as the Nigeria international bagged the last of the Foxes five goals against ​Newcastle. After a decent performance against Tottenham the week before, Ndidi showed more of his offensive prowess this time around, with his all-round capabilities starting to shine through.

Tanguy Ndombele (CM) - One goal in 69 Ligue 1 appearances is starting to look like a misleading stat, with Tanguy Ndombele having now scored two in five for ​Tottenham. The days of Spurs having no midfield runners look numbered, with Ndombele running the show on and off the ball in their win against ​Southampton. Well, until Serge Aurier's red card, as then he had to put in a solid defensive shift instead. Nonetheless, a top performance all round.

John McGinn (CM) - Does John McGinn belong on a list with ​Sadio Mane, ​Son Heung-min, Ashley Barnes and Diogo Jota in seemingly scoring every week? We think so. His thumping strike against ​Burnley came after he had an earlier effort disallowed for offside, taking on a goal-scoring onus at ​Aston Villa with his late runs into the box. Riyad Mahrez (RW) - Rolling back the years to his Leicester title-winning days, ​Riyad Mahrez showed everything to prove to Pep Guardiola he's worth a permanent place in the side, particularly with a possible ban for ​Bernardo Silva looming. An evening turning ​E​verton's Lucas Digne inside out was rewarded with a goal from a free-kick late on, as ​Manchester City's quest to close the gap on and keep pace with Liverpool went on.

Jamie Vardy (ST) - Rolling back the years to his Leic- wait, we've done this already. ​Jamie Vardy showed no sign of any decline as he enters the latter stages of his career, overtaking ​Cristiano Ronaldo's Premier League scoring tally with a brace against Newcastle. Now on 85 top flight goals, can he break into the '100 Club' by the end of the season?

Harvey Barnes (LW) - At last, Harvey Barnes' strong production from Leicester's left wing is being rewarded with assists. The 21-year-old is making it hard for manager Brendan Rodgers to ignore him, and more performances like this will have him knocking on Gareth Southgate's door for sure. A front three of Leicester's past, present and future looks great, right?