On a wet, windy and generally miserable night at Old Trafford, there wasn't much to shout about as Manchester United took on Arsenal.

Once viewed as the biggest game on the domestic calendar, these two former greats of English football are finding their feet again after suffering rather dramatic falls from grace.

But instead of chewing over the fat of years gone by, we're here to bring you positivity and joy - particularly if you're an Arsenal fan. One way of doing just that is mentioning superstar striker ​Pierre-Emerick Aubameyang.

The Gabonese frontman has been a revelation at the Emirates Stadium since making a £56m move from Borussia Dortmund in January 2018, netting goals for fun. His form has left many wondering why Real Madrid, or any other European big boy for that matter, decided not to take a punt on Aubameyang, despite being linked with him.

Well, that won't bother ​Arsenal fans and neither will his goalscoring record since he assumed the legendary #14 shirt, previously worn by the greatest striker in the club's history, Thierry Henry.

Indeed, you feel that Auba has taken inspiration from donning the same number as the flamboyant Frenchman - as he can't stop scoring. His equaliser at Old Trafford, as noted by ​Opta, was his 14th goal in his last 14 Premier League starts - not bad for a speed merchant, eh?

The goal was also Aubameyang's seventh strike of the 2019/20 Premier League season to date; the first time since Dennis Bergkamp in 1997/98 that an Arsenal player has scored that many so soon.

Furthermore, his dinked effort over David De Gea was his 39th ​Premier League goal in 19 months, and his 49th for the club in just 73 appearances. 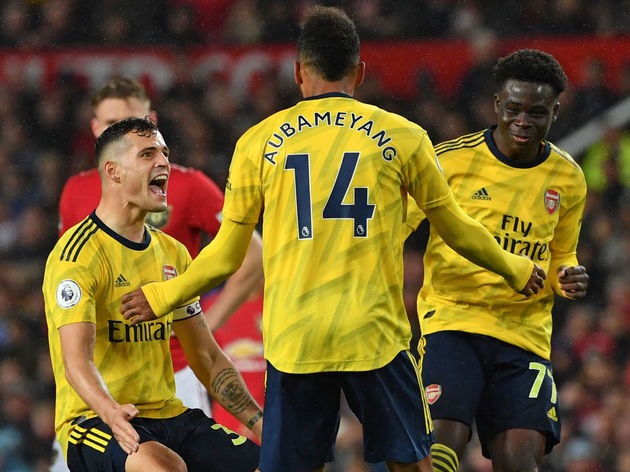 Rest assured Arsenal fans, you really do have one of the best strikers in world football on your books - now to focus on getting the defence sorted, and getting Kieran Tierney fit for starters.