​Dean Henderson's error was decisive as Liverpool secured a hard-fought 1-0 victory away to Sheffield United on Saturday.

Dominant in terms of possession, but well-matched in other areas of the game, the Reds struggled to break their hosts down in the first half, with John Egan an inspirational figure at the back for the Blades.

Laying prone, the centre-back recovered from a slip to block Roberto Firmino's path to goal with his head, though he he was powerless to stop Sadio Mane going through one-on-one soon after.

Fortunately for Egan and co., the ​Liverpool forward sent a wild effort wide of the mark with only Henderson to beat, Mane missing again minutes later as his close-range attempt rebounded off the upright.

The Senegal international will feel aggrieved after VAR failed to award a penalty following John Lundstram's wayward tackle at the start of the second 45.

As the contest wore on, the game became increasingly stretched, with the Blades nearly breaking the deadlock in the closing stages. They swept up-field to tee up John Fleck, but the midfielder's drilled shot ricocheted off a defender to spare Liverpool's blushes. The Reds then dealt a hammer blow through the boot of Georginio Wijnaldum; the Dutchman's bobbling effort squirming through the palms of Henderson, who somewhat redeemed himself with a fine save to deny Mo Salah late on.

​Sheffield United will be in the ​Premier League next season, their superb display against Liverpool proving they have more than enough to stave off relegation. If anything, the Blades should be looking to secure a mid-table finish. They'd be foolish to get ahead of themselves right now, but a few months down the line, Chris Wilder's men should be able to switch their focus.

Performances like this will help build a healthy cushion between United and the bottom three. Once that's established, they can start dreaming a bit bigger.

An excellent team showing was undone by Henderson's blunder, the youngster inexplicably allowing Wijnaldum's tame attempt to escape his grasp. 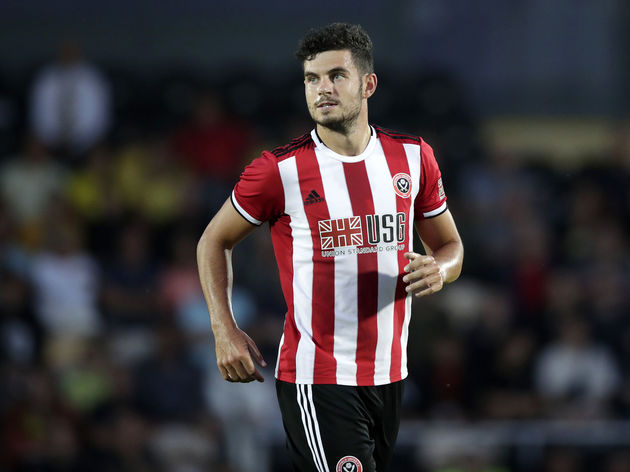 Nevertheless, every member of the Blades lineup - including Henderson - can be proud of their efforts on Saturday, with their defensive leader exceptional in the heart of the backline.

Egan was everywhere as Liverpool plugged away, orchestrating his fellow defenders and suffocating opponents in a marvellous all-round showing.

樂 "What are you willing to do to win a free bet?"

Dean Henderson embodying everyone’s frustration with FIFA goalkeeping today. Let’s one through his legs, then saves the point blank effort from Salah. pic.twitter.com/P5G0G9P9G0

United may well have uncovered a serious weakness in the Reds' game-plan on Saturday afternoon, having plenty of joy down the flanks as Klopp's fullbacks flooded forward. Oli McBurnie was the main beneficiary, the striker regularly finding space to drive at the Liverpool backline. He caused numerous issues against the Premier League's meanest defence, suggesting they have a vulnerability that other clubs should look to exploit.

The leaders had been untouchable until the clash at Bramall Lane - is this how opponents can get at the Reds?

When the going gets tough, the tough get going. Liverpool's talisman was in sterling form at Bramall Lane to ensure his side avoided slipping on a rather large banana skin.

From his delightful through-ball to Mane in the opening period to his handling of United's frontmen, the PFA Player of the Year was faultless.

McBurnie and Callum Robinson were a menace for the Reds to cope with, but Van Dijk's presence saw the Liverpool bandwagon roll on.

Super chance for Mane, but his shot is the sliciest slice since sliced bread.

3 - Georginio Wijnaldum has scored his 22nd @premierleague goal for Liverpool and Newcastle combined, with this just the third to come away from home. The goal came from Liverpool's first shot on target of the entire match. Gifted. pic.twitter.com/d3fUn8yCfX

Liverpool play host to Red Bull Salzburg on Wednesday night as they seek their first points in this season's ​Champions League, with a home match versus ​Leicester City t

Whilst the Reds continue their Premier League charge against the Foxes, Sheffield United travel to ​Watford on the same day before welcoming ​Arsenal to Bramall Lane a week later.