Marcelo is number 12 in 90min's Top 20 Greatest Footballers of the Decade series. Follow the rest of the series over the course of the next three weeks.

Everyone has their favourite football film. Escape to Victory, Fever Pitch, Bend it Like Beckham, the list goes on.

While this is no ode to the 2006 picture, the story of He told the ​The Players' Tribune: "It’s one of the first things I can remember in my life. When I was about six years old, we were on summer vacation from school, but I would still wake up at 7:30 every morning and take my football down to Botafogo Beach."

Beginning life as a five-a-side futsal player in the favelas,

Fluminense's senior squad in 2005, it took just one year for the scouts at ​Real Madrid to take notice.

 On this day 12 years ago, Marcelo made his Real Madrid debut...

A living breathing Santiago Muñez; a dream had become reality before even kicking a ball.

Earning his first start for the club under Fabio Capello, he went on to feature frequently in his first full season at the club, during which Los Blancos won the league title.

More domestic titles followed under the first of the next three managers, but it was Jose Mourinho's appointment that opened the door for success on the European stage - which would in turn become the defining competition in Marcelo's career. 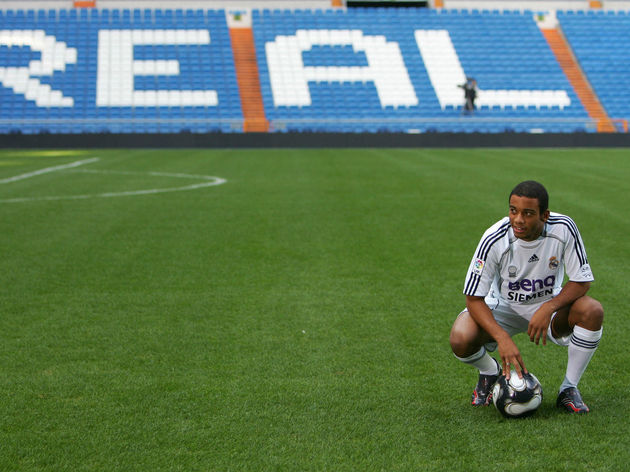 At this point recognition of Marcelo's ability waned. Not due to an overriding sense that he was under-achieving, merely due to his sustained performances at the highest level simply now falling under the category of 'expected'. This was a testament of how good he was/is, just as his ability to stay in favour under countless managers in Madrid is.

Again in 2013, his Champions League dream faltered at the semi-final hurdle once more, however, n

At long last the flying full-back had found himself on Europe's grandest stage. Not only that, but being pitted against their cross-city rivals coughed up the opportunity to both secure that elusive trophy, and stick it to Diego Simeone and co.

In the most spectacular of fashions, the final was won by Los Blancos, after stoppage tie drama brought about extra time, which proved to be Atletico's downfall. Marcelo got in on the act, albeit having started on the bench, but it mattered little to him. Even at this point, laying claim to three La Liga titles, two Copa del Rey triumphs and a Champions League haul is worthy enough of discussion among the top 20 players of the decade. But, that determined, poverty-stricken kid in Rio's favelas just ten years prior hadn't been replaced by a financially motivated 'been there, done it' man.

New chapters to his story were yet to be written.

Being rewarded with a new five-year deal, Marcelo continued to star under new boss Zinedine Zidane, yet again lifting the Champions League at the expense of the Rojiblancos in 2016. Starting the final this time, his flair in the attacking third was balanced effortlessly with defensive astuteness throughout the 120 minutes. And when the penalty shootout came around, he stood tall.

Success continued to rain down on the Brazilian. The following season another La Liga title was one; something which had eluded him for four years.

It was the season that we, in fact, seen the full-back at the peak of his powers. Ten assists in the league along with two strikes of his own firmly rooted him among the globe's finest, along with yet another UEFA Champions League crown; this time thumping Juventus 4-1 in the final.

While Madrid's success in Europe cannot be solely attributed to Marcelo's work, his knack for upping his game on the grandest stage was certainly crucial for Los Blancos.

And it was certainly crucial in the 2017/18 Champions League final, in which Marcelo quelled the threat of one of the most deadly attacks in Europe to help Real Madrid toward a win over Liverpool, and the club's third consecutive European triumph.

Such achievements should not be scoffed at. Yes, the Madrid side of the last decade has been one rightfully dominated by ​Cristiano Ronaldo, but there's no doubt that Marcelo has also been one of the world's biggest clubs defining players of a generation.

Since that night in Kiev things haven't gone as plan; there's not doubt about that. The same can be said about Marcelo's international career. His time with the S​Champions League

​Number 13 - Giorgio Chiellini: The Juventus Legend Who Has Always Found a Way to Win