​The pressure intensified on Ole Gunnar Solskjaer as his Manchester United side scraped past Rochdale on penalties in the Carabao Cup on Wednesday at Old Trafford, with the match ending 1-1 after 90 minutes.

The match, as expected, began with the Red Devils bossing possession, but chances were hard to come by. League One Rochdale settled very quickly and appeared unnerved by the big stage, looking bright on the counter. The second period began at a much faster pace, with both sides looking more energetic. And it was the away side who had the first real chance - Callum Camps' shot from three yards out being blocked acrobatically by Aaron Wan-Bissaka.

However, United were eventually able to break the deadlock halfway through the second half through Greenwood.

The forward collected a Jesse Lingard pass inside the area, before quickly shifting it and firing home. It appeared as though the Red Devils were labouring towards victory until Rochdale sprung forward on the counter and found a way past Sergio Romero. 16-year-old Luke Matheson the man to latch onto a floating cross and fire home.

The matched ended even and penalties were set to decide the match. Juan Mata, Andreas, Fred, Greenwood and Daniel James all scored to ensure a lacklustre United went through.

​United's last outing was, in all honesty, fairly embarrassing - a 2-0 defeat to West Ham on Sunday afternoon in the Premier League. As a result, fans were keen to see a bright and ruthless performance in the cup against lower-league opposition.

And while we could make this all about how United performed (we'll get to that), perhaps the main talking point was the decision by Solskjaer to make 21-year-old centre back Axel Tuanzebe captain for the evening. Tuanzebe has been at the club since the age of eight, but grew up in Rochdale. The decision to hand him the armband means he has now captained the Red Devils at every age level.

This was a very special night indeed for the former Aston Villa loanee, but this isn't to say that the decision wasn't controversial. Tuanzebe was younger than seven members of the starting lineup, which included the likes of ​Paul Pogba and Sergio Romero. Pogba overcame his recent injury troubles to start the game tonight and although his manager has previously named him captain before, it wasn't to be tonight.

Despite the World Cup winner's return, Solskjaer's men, once again, looked lethargic and stuck for ideas. The hosts managed 15 shots in the first half, but just the two were on target. In a match which many fans had hoped United would run riot, it was worryingly even. There was no real speed or intensity and almost immediately after they had broken the deadlock, Rochdale were able to find an equaliser.

It was not the result or performance Ole Gunnar Solskjaer would have been hoping for from his team.

The chap in the glasses’ expression sums it up so far #mufc pic.twitter.com/vf4IJ1lZjS

Pleased to see so many of our players seem to have found their proper level today.... Some of them could likely even step in and start for Rochdale, as well! #MUFC

Something is wrong at United! These players just look confused and disinterested I don’t know what else to say! #MUFC #Rochdale

STAR PLAYER - It was yet another tame and worrying performance by Manchester United. However, 17-year-old Mason Greenwood will grab the headlines once more as he bagged a well-taken goal. 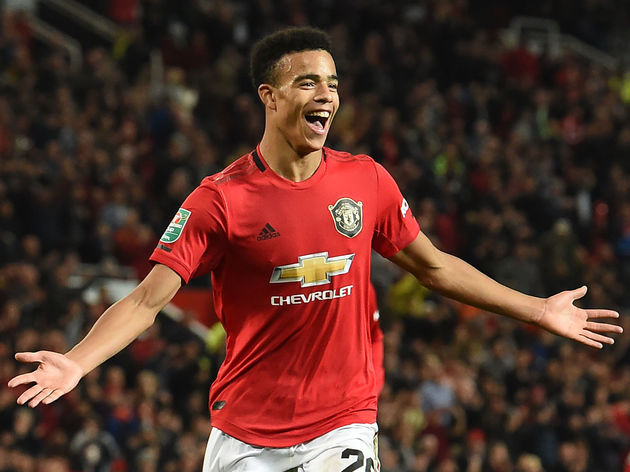 After scoring his first goal for the club against Astana in the Europa League, he followed this up with another crucial goal - this time in the Carabao Cup. The forward was constantly looking to make things happen, even when he was getting isolated due to the lack of speed in United's play.

Greenwood drifted across the frontline, often picking up the ball on either wing and encouraging players to get into the middle. He provided an inch-perfect cross for Pogba in the first half, but the Frenchman squandered it. The teenage prodigy had a series of half chances but showed his ruthlessness as he opened the scoring with a neat finish into the bottom corner.

Although it was a poor display by the team, Greenwood, once again, showed that he has a very bright future indeed.

Greenwood is like Luke Skywaker ... our only hope. Two starts, two class finishes, one with the left and one with the right. #MUFC

Tuanzebe and greenwood the only positives #mufc #munroc

United return to league action on Monday evening as they welcome Arsenal to Old Trafford in a crunch clash, before travelling to take on AZ Alkmaar in the Europa League on Thursday.

Rochdale, similarly, return to action in League One when they host Wycombe in a tough fixture on Saturday afternoon, before taking on Bolton at home in the Football League Trophy on Tuesday.