​A youthful Liverpool side ran out 2-0 winners against League One MK Dons on Wednesday night, as Jurgen Klopp's rising starlets and fringe stars took their chance to impress in the Carabao Cup.

The Reds, whose starting lineup had an average age of sub 24 despite the presence of 33-year-old James Milner, survived few scares at Stadium MK and scored a goal in each half to progress to the fourth round of England's second domestic trophy. 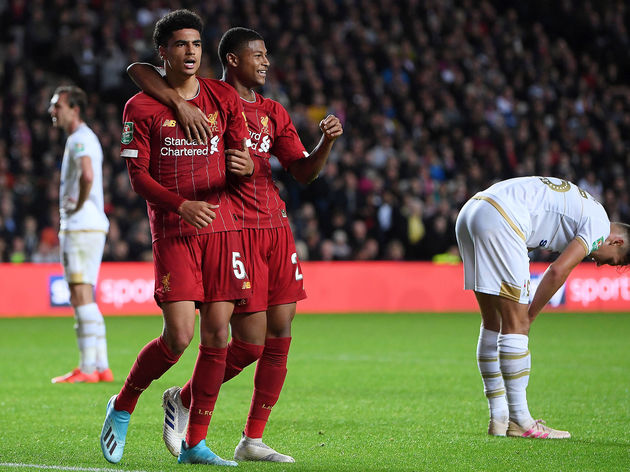 It was the veteran Milner who opened the scoring towards the end of a first-half that was heavy on possession but low on penetration for the visitors. Milner's powerful long-range drive was fluffed by goalkeeper Stuart Moore, who could only punch the ball into the net as he tried to recover from his error.

It was a largely comfortable second-half for Liverpool, as MK Dons relied on rare counters to get back into the tie but managed just two shots on target all game.

Impressive 17-year-old Dutch right back Ki-Jana Hoever thumped home a header from a Milner cross on 69 minutes to all-but confirm the victory, with the rest of the tie playing out much like a training exercise. Much of the pre-game interest was, understandably, in a first chance to see many of ​Liverpool's highly rated young stars this season.

While it was an underwhelmingly quiet evening for 19-year-old striker Rhian Brewster, the likes of Harvey Elliott, Curtis Jones and Hoever all impressed with their energy and drive.

In particular, it was the former, now the youngest ever player to start a competitive game for the Reds at 16 and 174 days, who caught the eye on the night.

The former Fulham attacker delivered several dangerous crosses, always looked threatening and was unlucky not to score on his competitive debut as he hit the bar late on.

No goal for Harvey Elliott tonight but wow, what a debut. You should always temper expectations around young players, particularly when they're only 16, but how can you not be excited by that performance? He looks a special, special talent.

Sometimes you can just tell straight away when a young player has “it”. That special quality to make it all the way to the top.

Harvey Elliott has that. The constant, intelligent movement. Maturity to keep it simple when called for. The touch, passing and skill. Baller.

Me when Harvey Elliott does a madness inside five minutes tonight. https://t.co/vGx4CQ6uzz

Milner best player on the park. We sometimes accuse him of lacking creativity in the first-team, but tonight he's bossed the game and looks about as cultured as it gets from left-back. Shows the levels required.