Not always a club willing to give their youth academy graduates a chance in the first team, Manchester City bucked that trend on Tuesday night in the Carabao Cup. 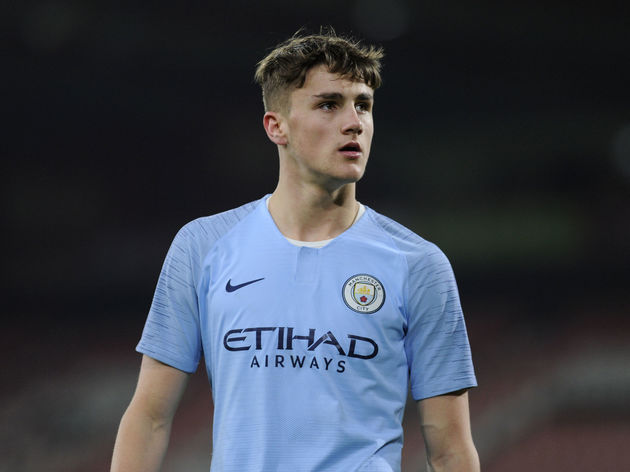 He's Been at City for a Long Time

An absolute honour and pleasure to make my professional debut for this amazing club fans were class as always Up The Blues! @ManCity pic.twitter.com/NzbwCIIKTX

​​Harwood-Bellis has been on City's books for a whopping nine years, having being signed up by the club when he was just eight years old.

The story of his arrival shares similarities with another one of the Citizens' young stars, Phil Foden.

Both wouldn't be playing in that division long however, with Foden also being picked up by ​City at just eight.

Who knows? Maybe we'll be seeing the 'Stockport Iniesta' line up alongside the "Stockport

He Shared the Stage With Pep at His Man City Unveiling​​

​​Cast you mind back to the summer of 2016 - whilst trying to block out pretty much everything that happened to England at Euro 2016. Specifically, try and remember Pep Guardiola's unveiling at Manchester City.

It was quite the grandiose affair, with live bands playing and thousands of City fans lining the courtyard of the club's Etihad campus in order to hear their new messiah speak.

One of five players stood alongside Pep - including women's captain Steph Houghton and first teamer Kelechi Iheanacho - who were chosen to represent a different aspect of the club, the then 14-year-old was selected as the representative of the club's youth academy. Who'd have thought Guardiola would be the man to give him his first team debut just three seasons later?

He's Got Links to Stockport County​​

​​Despite being at City from such a young age and playing a supporting role in the pageantry surrounding Pep Guardiola's arrival at the club, Harwood-Bellis has strong connections with another football club - Stockport County.

Born in the town, his uncle is a director at the National League side whilst his father has also been a vital part of the furniture at Edgeley Park in recent times.

Harwood-Bellis senior used to dress up as the club's mascot Vernon Bear, during matchdays.

He's Doing it for His Grandad​​

​​After playing a starring role against Preston on his debut Harwood-Bellis posting a moving tribute to his late grandfather on social media.

A former Manchester City season ticket holder, Pep Guardiola excused the 17-year-old from the club's pre-season tour of Asia in order for the defender to attend the funeral.

The Manchester Evening News  reported that the last words that Harwood-Bellis' grandfather spoke to him were: "

Great achievement making my u19 international debutgbeng good 3-1 win to go with it aswell❤️ @England pic.twitter.com/CeD5cpuvh7

​Harwood-Ellis has been capped at Under-15, Under-16, Under-17 and most recently, Under-19 level for England.

His Under-19s debut came earlier this month as he played 90 minutes in a 3-1 win over Greece at St. George's Park.

Also included in the side were ​Liverpool starlet Curtis Jones, as well as ​Arsenal youngster Bukayo Saka, who recently scored and provided two assists in the Gunners' Europa League win over Eintracht Frankfurt.

He's Guardiola's Kind of Centre Back ​Gone are the days when English centre-backs could get away with just being strong and tall, and hoofing the ball 80-yards if it went anywhere near them.

​John Stones and ​Harry Maguire are the poster boys for a new kind of defender that can play out from the back under an increasing degree of pressure, though they may be able to add Harwood-Bellis to their ranks if he continues to develop at this remarkable rate.

The 17-year-old displayed how comfortable he was on the ball against Preston as he registered a very impressive 96% pass completion rate. He is truly a centre-back in the entirely modern sense of the term - no wonder Guardiola is such a fan.