It's all any of us want, and it's hell when we get there. So, no wonder it's something we don't want to do on our own (Jack Gallagher and I take the plunge every week). I was taught if we're born with Power, then Rankings are about choosing the right place to put it.

People talk about that a lot, it feeling right, 'When it feels right, it's easy', but I'm not sure that's true. It takes strength to know what's right. And Power Ranking isn't something that weak people do. Being a ranker takes a hell of a lot of hope. I think what they mean is when you find somebody that deserves a spot in these rankings, it feels like hope.

So thank you for bringing us all together here today. "I don't believe you can pay your problems away. I think you have to face who you are and suffer the consequences. It's the only road to happiness.”

In their insistence on leaving out at least two of their summer signings at one time, AC Milan seem to believe this mantra, which is, to be fair, generally sound.

Indeed, it is a piece of advice that both Milanese sides could've done with on numerous occasions throughout this decade.

But thank god it wasn't one Inter took this summer. Thank god they brought in Stefano Sensi (who was here last week), Romelu Lukaku (who, yes, is to come) and Nicolo Barella who, I'm sorry Chelsea and PSG fans, is the best Italian midfielder going right now. And he's barely even got going yet.

Would be worse turning up holding a sun newspaper i guess  https://t.co/Fc47PdtzbL

So, James Maddison may need help with what to wear in the morning, apparently, but the jokes and stuff? No help needed there. This is either because he's a funny guy, with good bits, or because he's a got a funny guy to write his bits for him on social media. Either way, he's good.

I’ve just seen him stuffing the MOM trophy in it too  https://t.co/rEN754PuqR

Oh, and as Ben Chilwell can attest, he was also good on Saturday. Really, really good. "Hair is everything. We wish it wasn’t, so we could actually think about something else occasionally, but it is. It’s the difference between a good day and a bad day.”

This is something Paul Pogba would say, AMIRITE? But not Sir Pashun himself, Mark 'Mr. West Ham' Noble.

No siree. Mark is a noble fellow who's had the same haircut for 32 years, and in the time he's saved swapping hairstyles, he's been able to practice his football skills - like what a footballer should actually do!

Thankfully, all this hard work finally paid off in the 2-0 win over Manchester United on the weekend. And where was Pogba? Probably getting a haircut, FFS! "'New to the parish?

'Father Patrick sadly...died, so I got the gig.'

Juventus have a new inductee into the parish, and finally the newbie is someone who can genuinely replace the midfield goalscoring threat that was lost when Arturo Vidal and Claudio Marchisio were lost to Barcelona and, um, time. "Please don't come to the church again. I mean that...with the greatest of compliments.”

The above is a statement from Watford fans. Please read and consider. And, yes, I know the latest drubbing came at the Etihad, but I think they meant in a metaphoric sense, you know? Like, they just don't want to see again anywhere, ever...with the greatest of compliments.

P.S. feel free to hit a ball like you did for that last goal each and every time you get the ball, no matter the location. And maybe, it isn't just in who you believe, but where you do this extensive believing, because Philippe Coutinho's belief looks to be pretty strong at Bayern Munich these days.

And this belief was reciprocated by Robert Lewandowski on Saturday, when he offered the Brazilian the chance to notch his first goal for the club with a penalty in the 62nd-minute. Coutinho scored, then provided an assist for fellow loanee Ivan Perisic.

Belief. It goes a long way. "People are all we’ve got. So grab the night by its nipples and go flirt with someone.”

I'm not remotely saying that Fernando Llorente is a nipple-grabber, nor a flirter - he's happily married. But I'm sure, you know, back in the day, considering those eyes and chiselled features, he had great game.

And he had a great game against Lecce over the weekend, nabbing a brace. Phew, that was dicey, but we brought it back around nicely. From a six-year-old, no less. Imagine what he'll be like once he's gone through puberty. 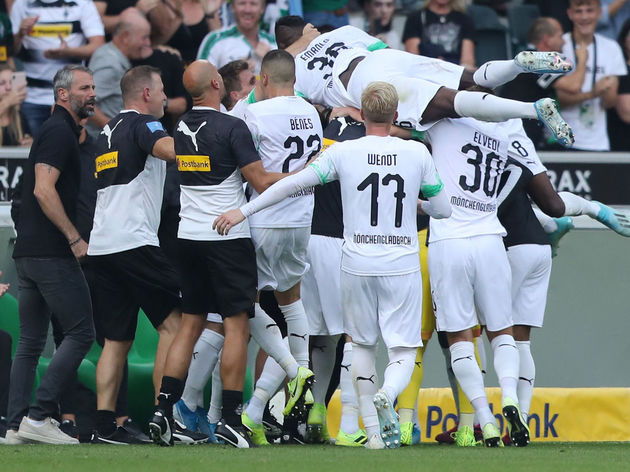 Fleabag: 'We can arrange that.'

And so it came to pass that Lillian Thuram had two children, and one of them was named Marcus, who, on Sunday, came off the bench to score two goals for Borussia Monchengladbach and restore some much-needed faith in the side after their midweek Austrian humiliation. "Well, at least someone's having fun.”

Though somewhat calmed by victory over Sevilla, chaos continues to reign at Real Madrid, with futures being up in the air and crisis surely only round the corner. "I'm not a bad guy, I just have a bad personality!”

Bernardo Silva nabbed an unlikely hat-trick against Watford, catapulting him up 90min's Definitive European Player Power Rankings. Then Bernardo Silva did a racism, dropping his stock here at DEPR HQ.

And yeah, his reaction to the calling-out of his racism was, well, less than satisfactory. Maybe the above quote could've helped. When it comes to N'Golo Kante, both can be true. The guy is a marvel. It is unprecedented for a man on the losing side to reach such a place in these rankings, but Kante is worthy of such law-breaking.

And this is not the first law Kante has broken, just ask physics. How does he do it? Well, he is the law. And the order. And everything in between. Neymar is back to his best, but don't tell the French. They're trying really hard to remain indifferent. "Don't make me an optimist, you will ruin my life.”

Another game, another goal for Romelu Lukaku at Inter, and this one, being against AC Milan, was the most important of the lot.

The Belgian, along with his fellow summer recruits, is quickly turning Inter - who are currently top of Serie A with an unblemished record - into an optimistic club. This would not be good for anyone. "The only person I'd run through an airport for is you.”

Here's Robert Lewandowski, looking at all the players on an equal footing with him this season. And, as top scorer across all of Europe's top five leagues, with nine goals in five games, the Pole's pole position is barely under threat.

That's nine goals instead of ten, remember, after the striker turned down the chance to nab yet another hat-trick and instead offered Coutinho the chance to get off the ground in Bavaria. He is both ruthless and generous.

A run-through-an-airport-worthy combination, if you ask me.