​Major League Soccer may be more than simply a retirement home for washed-up stars, but a summer switch to the USA would certainly be a backwards step for David Silva.

Let's not pretend that physical attributes were what made the Spaniard a runaway success at Manchester City. It was footballing intelligence, wizardry with the ball and steely determination saw him flourish in the Premier League - not one of those qualities has left Silva. 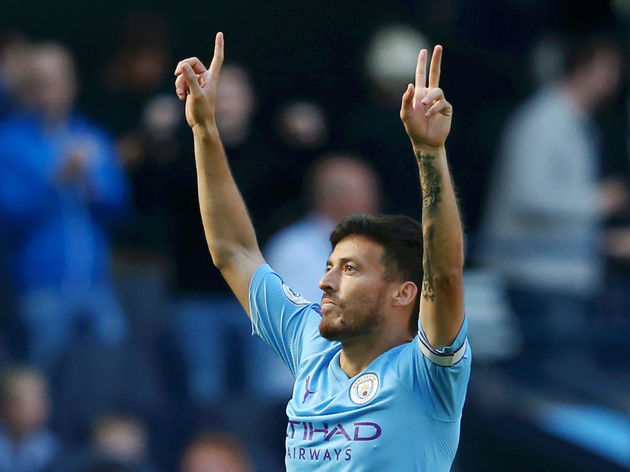 David Beckham's new ​MLS side Inter Miami are allegedly ​set to make the 33-year-old their marquee signing ahead of their debut campaign in the competition, yet it seems to have come all too soon for the ​Sky Blues playmaker.

In late August, it was Silva who ran the show for Pep Guardiola's team as they collected the victory at ​Bournemouth. Such standout performances aren't as common from El Mago as they once were, though he is clearly still capable of producing magic.

His start to the 2019/20 season largely reflects how he got on last term. The midfielder has his off days, matches where his influence on the contest is reduced, but dazzling displays still happen and often make the difference for City.

Silva has already amassed four assists and a goal in his six league appearances thus far, building on his tally of six and eight from the year prior. Those don't seem like the stats of a man on a steady decline. Physically, he may be struggling with the pace and intensity of English football. Nevertheless, he is still mentally and technically one of the finest players currently plying their trade on these shores.

Whether he stays in England is not up for debate. Silva will be departing Manchester and moving abroad, but that doesn't mean he should travel across the pond to link up with Beckham in Miami.

Without question, there are alternative projects around the globe that suit him perfectly, ranging from more obvious adventures to ones that are rather unusual.

A return to his birthplace in the Canary Islands offers a marvellous opportunity for Silva and one that he should be investigating, instead of working on a transfer to the MLS.

52 - David Silva's opener versus Watford after 52 seconds is the fastest goal scored in the Premier League this season. Lightning. pic.twitter.com/sNb3OPKOU9

In previous interviews, he has ​mentioned his desire to go back and finish his career with Las Palmas, who are currently in the Spanish

Pepe Mel - one-time manager of West Brom - is in charge at Estadio Gran Canaria, with the coach well-regarded amongst his compatriots. He would understand how best to use Silva in the Palmas lineup, allowing the City star to end his playing days as a homecoming hero.

With all due respect, speed and other physical attributes are something of a commodity in the lower leagues, meaning the veteran wouldn't be overly exposed playing for a club in the

If anything, opposition defences would be the ones exposed by Silva's hawk-eye vision and faultless passing, both of which would be devastating at that level. He could provide the ammunition for the forwards to fire Las Palmas up into ​La Liga. Given Mel's familiarity with getting sides promoted, a move to Gran Canaria may well end in fireworks for player and club.

It's doubtful Silva would enjoy the same kind of success with Inter Miami. Sure, he'd be the poster boy of a new franchise and that is admittedly an enticing prospect, yet the novelty would soon wear off.

He has no attachment or loyalty to the place, they'd likely be whipping boys as they get to grips with the demands of the competition, and there may be lingering thoughts about what could have been.

If Silva opts for Las Palmas, he is guaranteed legendary status, home comforts and a style of play that befits him. On top of that, he could be the one to seal their return to the top-flight, immortalising himself in the Canary Islands. If the World Cup winner chooses Miami, he is guaranteed none of that. Of course, the money will be far better, of that there is little doubt.

But, Silva doesn't need the cash - he deserves a beautiful swansong with his friends, family and fellow islanders. Please, David, let the story have a happy ending.