Brighton ​were unable to take advantage of a dominant performance on Saturday afternoon, as they drew 0-0 with Newcastle at St. James' Park.

The Seagulls were on top from the first whistle, coming close to taking the lead through both Aaron Mooy and Neal Maupay. They even had a goal ruled out, when Steven Alzate's excellent header was correctly adjudged offside.

Newcastle were unable to get their foot on the ball during the first half, but started to have some efforts on goal during the second period.

Christian Atsu and Miguel Almiron both had chances, but the Magpies were unable to capitalise before the visitors once again assumed control. Pascal Groß' effort flew over the bar, before Fabian Schar's outstanding goal-line clearance from Aaron Connolly's goal-bound shot kept the game goalless. Without a home win this season, ​Newcastle were vying to change that on Saturday. While they had few chances in the first half, it was a lacklustre and deflated performance from the Magpies, who were second best all afternoon and were chasing the ball all game long.

They were dominated in possession and showed little to no urgency when going forward, despite being the home side. Joelinton was isolated up front, and Newcastle's supporters will be worried by their lack of creativity.

If the hosts continue to play this way, it could be a long season on Tyneside - with a ​Premier League relegation scrap to look forward to. 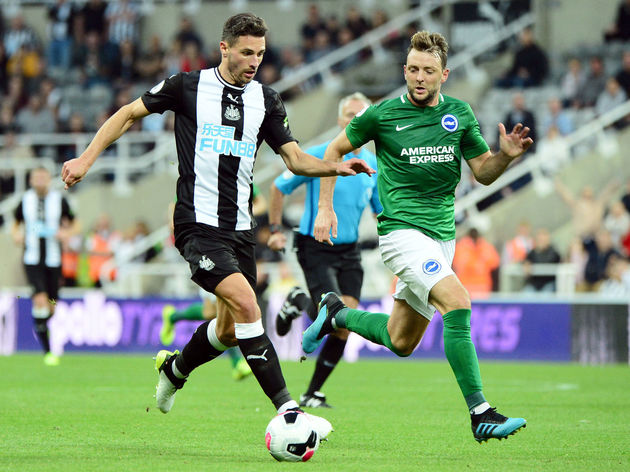 STAR MAN - In a lacklustre performance, Newcastle have Fabian Schar to thank for coming away with a point. The Swiss centre-back was excellent in all facets of the game, making some crucial tackles and clearances at the back before looking impressive going forward.

It isn't reassuring to know that Newcastle's most creative movements came from one of their defenders, but everybody knows that Schar has good touch and poise on the ball.

Schar looks to be our most creative player. Concerning when he’s playing in the middle of a back 3.

Fabian Schar is world class, pass it on

FABIAN SCHÄR WITH THE BEAUTIFUL GOAL-LINE CLEARANCE, WHO ELSE pic.twitter.com/fLQIkPMbw8 On a four-game winless run and without victory since the opening day, ​Brighton fancied their chances against a struggling Newcastle side. They were the better side all afternoon and dominated their hosts, but couldn't make the most of their chances at St. James' Park.

The Seagulls were on top from the first whistle, and did well to gain control of the game as the visitors. They could of, and perhaps should of, scored at least two, and will be kicking themselves for not pressing home the advantage.

That said, a point is a decent result on the road and Potter will look to draw positives from his side's dominance going forward.

STAR MAN - With Brighton unlucky not to score, Lewis Dunk also played a key role in keeping the hosts at bay. The defender was solid at the back and was at the heart of a back three, keeping Newcastle out with some excellent blocks and good positioning throughout.

Newcastle have eight days to prepare for their next game, as they travel down to the Midlands to face ​Leicester next Sunday. The Magpies are back at St. James' Park on 6 October, as they welcome ​​Manchester United to Tyneside.

Brighton return to the Amex for the Carabao Cup third round visit of Aston Villa, before following that up with a trip to Stamford Bridge to face Chelsea.