Juventus fought back from a goal down against Verona to earn a 2-1 win in Turin, sealed by Cristiano Ronaldo's penalty.

A mad 15 seconds saw Verona take a shock lead, first hitting the post with a penalty, then smashing the crossbar on the rebound, only for Miguel Veloso to hit a 30-yard belter which flew into the top corner. 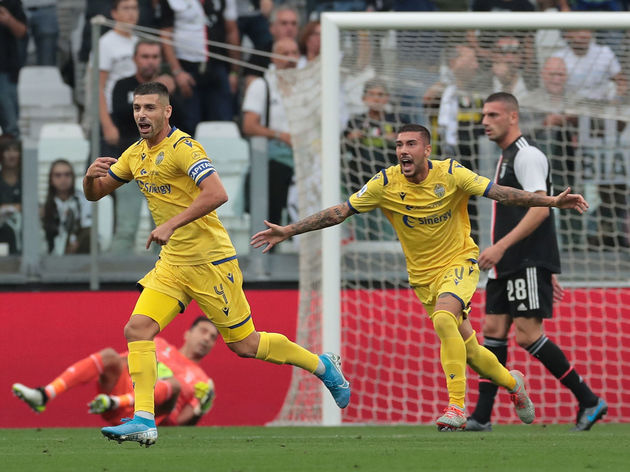 Debutant ​Aaron Ramsey equalised for the home side just after the half-hour mark, his long-range effort deflecting beyond the Verona goalkeeper. A Ronaldo spot-kick handed Juve the lead just after half-time, putting Maurizio Sarri's side in control at the Allianz Stadium.

The away side had chances to steal a point late on, but the hosts held on to a valuable three points

Much has been made of ​Juventus' slow start to the season as they begin to settle into life under Sarri, but there were green shoots of progress, especially in the second half.

I Bianconeri's defence made a shaky start to the game, conceding a penalty and looking far too susceptible when Verona drove at the heart of the Juve backline. Sarri has struggled to replace the injured Giorgio Chiellini, and Matthijs de Ligt has looked far from sturdy when given a chance in the first team.

The home side looked far more fluid and cohesive going forward on Saturday evening, and their new boss will be pleased with some of the link-up play that his attackers produced. Juve are taking their time, but they seem to be finding their rhythm in the post Max Allegri era.

STAR MAN - Juan Cuadrado just keeps on fighting his way back into this Juventus side. The Colombian winger may not be the most talented or clinical player in the squad, but his work-rate and desire makes him a valuable asset to Sarri's team.

Cuadrado's role iat Juve is very similar to that of Jose Callejon at ​Napoli under the Italian boss, who loves a hard-working and pacy wide player to run in behind and cause problems. The 31-year-old did exactly that, giving the Verona full-back a constant headache during the game, and eventually winning a penalty with one of his trademark runs.

A typically solid performance by Cuadrado.

THE MOST BIZARRE SEQUENCE FOR A GOAL!

Verona hit the post on the penalty, hit the crossbar on rebound, then a sensational goal from outside the box from Veloso.

STAR MAN - Yes, he did score an absolute screamer, but that's not the only reason he's got the nod as Verona's star man. Veloso worked tirelessly in the midfield, and at the age of 33, that's no mean feat. The Portuguese star put in a determined display for his side, who pushed the hosts all the way in a tense evening in Turin. And obviously, he scored one of the goals of the season to put I Gialloblu ahead, which will be a priceless memory to every Verona fan who made the journey on Saturday evening.

Juve will be satisfied with their efforts on Saturday evening, and Sarri's side will take plenty of encouragement going in to their next fixture away at newly-promoted Brescia on Tuesday.

Verona will be keen to get back to winning ways and put some vital points on the board when they host Udinese in a huge match at the bottom of the league.