​Arsenal begin their Carabao Cup campaign on Tuesday night when they host Nottingham Forest at the Emirates Stadium.

Given that this game comes just two days after they face Aston Villa in the Premier League, Unai Emery will be forced to rotate his squad, and will be expected to name a youthful side.

What will that team look like? Who will be rested? Who will get a chance? Those are all questions that still need to be answered, but in the meantime, here are six youngsters who should be blooded from the start... The 20-year-old has been a revelation so far this season. He broke into the squad at the back end of last season, and appeared off the bench in Arsenal's 4-1 defeat to Chelsea in the Europa League final.

He missed a big chance in that game, but showed enough in his cameo appearance to indicate that he was here to stay. He has not looked back since. Having impressed throughout pre-season, he started the opening three Premier League

He has been moved to the bench in recent weeks, but was in fine form on Thursday night, scoring in a 3-0 win against Eintracht Frankfurt. An exciting prospect, who should get the chance to dazzle again on Tuesday. 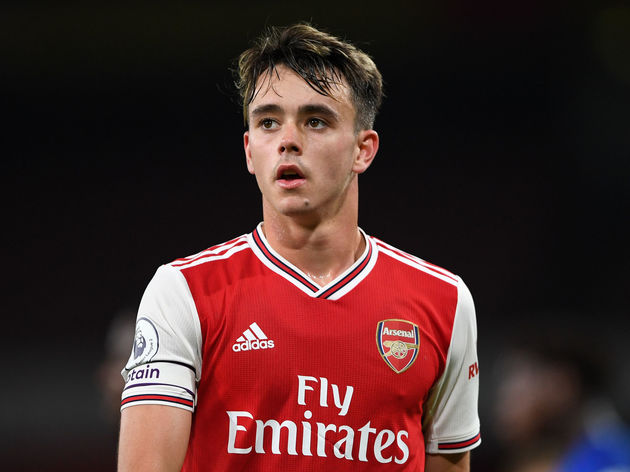 Given the busy schedule, Emery will likely have to look to make a number of changes in midfield. This is where Burton comes into play.

The Welsh attacking midfielder was heavily involved throughout pre-season, but has dropped back down to the Under-23s ​since August. He has scored twice in the first four games of the season, indicating how he offers a goal threat from midfield, something that Arsenal This could be the match to get Nelson

He started the opening two Premier League game of the season, but was hauled off at half time in the second match and has had to settle for a place on the bench since. Nelson showed the talent that he possesses whilst in Germany last season, and he now needs the opportunity to shine in his homeland. Tuesday night could be his moment. Not a great deal was expected of Martinelli when he arrived from Brazil over the summer. He was clearly a player bought for the future, not the present.

Indeed, he has only featured in one Premier League game so far, and was an unused substitute on Thursday even when Emery opted to name an inexperienced side. All players need to feel wanted though, and that they can contribute to the side, and this could be his chance to show what he can do.

He is able to play from the wings or up front, and with Pierre-Emerick Aubameyang It has been a difficult few months for Smith Rowe, who has had to battle with injuries throughout 2019. Yet he returned to action on Thursday, getting an hour under his belt, and showed glimpses of the quality that he has.

Now it is important for the winger to stay fit and get regular game time if possible. Another start here would boost his confidence and ensure that his fitness continues to improve. ​Saving the best until last. It has been a long time since an Arsenal teenager broke onto the scene in such spectacular fashion.

Saka was outstanding in the Europa League on Thursday night, scoring once and providing two assists. Given that he is still only 18, Arsenal fans will have to be patient with him, as he now needs to produce those kind of displays on a consistent basis.

However, every supporter will have gone away from that game looking forward to seeing Saka play again. They ought to get their wish on Tuesday.