​Borussia Dortmund will be looking to build on a dominant display against Bayer Leverkusen as they travel to Frankfurt on Sunday.

Defeat at the hands of Union Berlin before the international break meant that BVB lost their 100% record to start the season. However, goals from Paco Alcacer, Marco Reus (2) and Raphael Guerreiro against Leverkusen last week ensured that Lucien Favre's side got back on track.

Arsenal in the Europa League on Thursday. 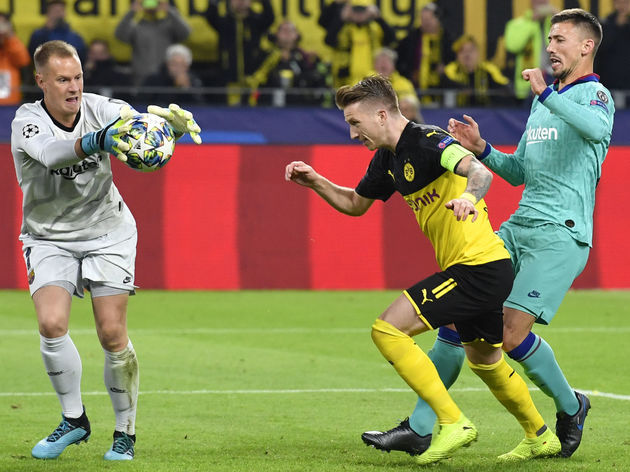 Veteran defender Marco Russ is out indefinitely with a ruptured Achilles tendon, but we could see Sebastien Rode return to the squad to take on his former side.

Lucien Favre has confirmed that Nico Schulz and Marwin Hitz will miss Sunday's game, whilst Lukasz Piszczek is a doubt. It's believed the club will make a late assessment on his fitness, but it looks unlikely for the Polish international to start.

Frankfurt have struggled in this fixture in recent years, winning just six of the last 30 meetings between these two sides. The home side are also winless in the last five meetings, last coming out on top in 2-1 home win back in 2016. Last season we saw the two teams draw this fixture 1-1, whilst Dortmund won 3-1 at the Signal Iduna Park. Dortmund are coming into this one off the back of an impressive week. Their 4-0 demolition of top-four contenders Leverkusen certainly sent a message and they also impressed against Barca in the week, albeit in a 0-0 draw.

Those were an important set of results after their shock 3-1 defeat to newly-promoted Union Berlin on matchday three. Eintracht were unlucky against Arsenal on Thursday. They were, arguably, the better side until Dominik Kohr was sent-off, with the English side scoring two after his dismissal.

Their league form has been hit-or-miss though, beating Hoffenheim and Fortuna at home but struggling on the road, losing at Leipzig and Augsburg.

Here's how the two clubs fared in their last five games.

The home side will have to be at they're best if they want to beat this brilliant Dortmund side.

With BVB also having the advantage of playing two days earlier in the week, the visitors should get the win here. However, despite losing Sebastien Haller and Luka Jovic in the summer, Frankfurt still have a threat going forward after bringing in Bas Dost and Andre Silva. The Dortmund defence that was so impressive on Tuesday night will be put to the test once more this weekend.

However, we saw how Frankfurt struggled to deal with Arsenal's counters on Thursday and that's how Favre likes to play. With Sancho, Brandt, Reus and Alcacer on the break, BVB will be too good on Sunday.