​Arsenal goalkeeper Emiliano Martinez has predicted that the club's current crop of youngsters could develop into the best wingers in the Premier League.

The 27-year-old made his first appearance of the season on Thursday evening, keeping a clean sheet in the Gunners' emphatic 3-0 Europa League victory over Eintracht Frankfurt. 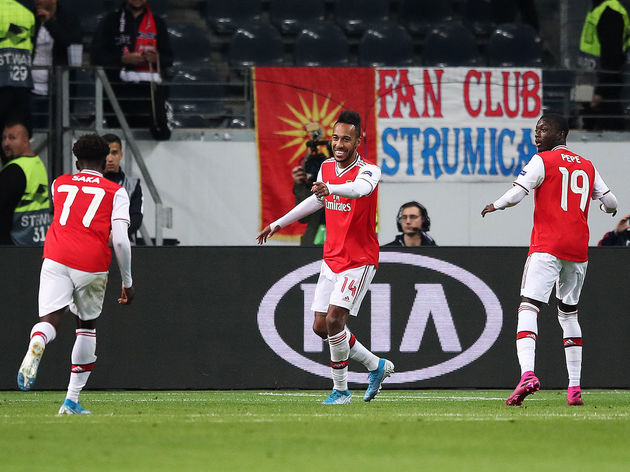 Manager Unai Emery opted to field a youthful side, and they were able to get the job done in convincing fashion. Martinez was particularly impressed with Arsenal's wide men, singling out Bukayo Saka and Emile Smith-Rowe for praise, whilst also tipping Joe Willock and Reiss Nelson to have bright futures ahead of them.

"We spoke before the game and we know we're the youngest team in the Premier League. We were very young going forward today," he told the club's official website.

"Auba was up front and then we had Emile and Bukayo on the wings. They're so talented those two guys, and with Martinelli as well, Willock, Nelson... if we help them settle in the team, they'll probably be the best wingers in the league."

Saka and Smith-Rowe were making their first starts of the season, with Saka capping an eye-catching display with a goal and two assists. Willock and Nelson, meanwhile, have established themselves as regulars in the first-team squad, with Willock seemingly earning Emery's trust the most thus far - starting the Gunners' opening three league games.

Nelson has had a quieter time, failing to start a game since the opening day of the season, but he could be given more opportunities in the coming weeks, with Alexandre Lacazette