Barcelona: The XI That Should Start Against Granada in La Liga

​It has been an unconvincing start to the season for Barcelona as they look to secure a third straight Spanish title. They slipped to an opening day defeat against Athletic Bilbao, before only managing a draw away at Osasuna, meaning that they are yet to win on the road so far this season.

Indeed, they were reliant on some Marc-Andre ter Stegen heroics to ensure that they were able to grab a draw against Borussia Dortmund in the Champions League in midweek.

Their next away trip comes this weekend, with the champions travelling to Granada. Here is how they are expected to line-up. Nelson Semedo (RB) - Having struggled to hold down a regular spot in the back four last season, Semedo now appears to be Ernesto Valverde's favoured option at right back. Sergi Roberto is a competent alternative, but Semedo should get the nod once more here.

Gerard Pique (CB) - The Spanish centre back had one of his best seasons for the club last year, producing consistent displays to steer his side to a comfortable title defence. He has started the current campaign less impressively, and has picked up four bookings in his last five games in all competitions - unusual for someone who is usually so disciplined ​at the back. Still, he continues to be indispensable at the heart of the defence.

Clement Lenglet (CB) - With fellow countryman Samuel Umtiti set to miss out due to injury once more, Lenglet will retain his place in the side. The 24-year-old filled in adequately last season, and is now an established member of the Barcelona defence.

Junior Firpo (LB) - With Jordi Alba limping off in midweek with a hamstring problem, Firpo will make his first start of the season. The young defender signed from Real Betis in the summer, and was clearly viewed as a back-up option to Alba, but now he will get his chance to show what he can do. 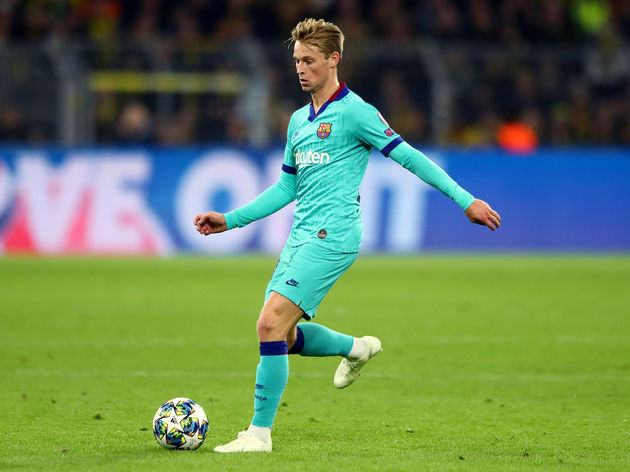 Frenkie de Jong (DM) - This could be the game where De Jong finally gets to play in his favoured position. The Dutch midfielder has often operated slightly higher up the pitch this season, with Sergio Busquets playing as the deepest of the midfield three. However, the 31-year-old Busquets has started four games on the trot, and with the team having an upcoming game next Tuesday against Villarreal, this may be the time to give his legs a rest.

Ivan Rakitic (CM) - During the summer transfer window it seemed that Rakitic may be heading for the exit door. However, a move did not materialise and he remains at the club for now. The experienced Croatian has struggled for game time so far this season, but with Barcelona

Arthur Melo (CM) - Having been eased back into the fold in the early stages of the season following his involvement in the Copa America, Arthur has started the last two games and appears to be getting back up to speed. There is the possibility that either Roberto or Arturo Vidal Carles Perez (RW) - The toughest call for Valverde this weekend: does he start Lionel Messi? The answer: probably not. Having made his first appearance of the season from the bench on Tuesday, there is the temptation to hand Messi

Antoine Griezmann (LW) - Barcelona's highest profile signing of the summer has settled in pretty quickly at his new club. The Frenchman is able to play in any of the positions across the front three, but will probably play from the left here, and tuck inside to combine with the other members of the front line when possible.