​The Champions League is back, and so are all those twists and turns.

Many intriguing storylines unfolded across Europe this week as the continent's elite began their search for glory. Amongst other events, there was a home defeat for Frank Lampard's Chelsea, Angel Di Maria's redemption versus Real Madrid and the emergence of a new star in Austria.

Here is 90min's Team of the Week for the opening round of fixtures. Marc-Andre ter Stegen (GK) - Had their German shot-stopper not been on song in his home country, ​Barcelona would have been decimated away to ​Borussia Dortmund. Ter Stegen seemed to be having a one-on-one battle with Marco Reus, saving the forward's penalty and frustrating him on numerous other occasions as the game ended in stalemate.

Kieran Trippier (RB) - Since departing ​Tottenham Hotspur in the summer, Trippier has begun to look more like the fearless right-back who starred for England at the 2018 World Cup. He ensured Cristiano Ronaldo was a peripheral figure in ​Atletico Madrid's 2-2 draw with ​Juventus, just about stopped Blaise Matuidi's effort crossing the line and had a hand in both the Spaniards' goals.

Mats Hummels (CB) - Ernesto Valverde may have needed plenty of aid from his 'keeper, but it's not as though

Kalidou Koulibaly (CB) - If you're to topple the European champions in the first match of their title defence, you need solidity in your backline. My goodness, did Koulibaly make sure ​Napoli were difficult to wear down as they beat ​Liverpool 2-0 in southern Italy. An inspirational performance from the Senegalese.

Juan Bernat (LB) - A bit of magic was required to break the deadlock between Paris Saint-Germain and ​Real, Di Maria arrowing in at the near-post from a delightful Bernat cut-back. The latter was integral throughout, looking sharp and threatening as the French club secured a 3-0 victory. Idrissa Gueye (CDM) - Whilst Bernat was causing Los Blancos problems at the top end of the pitch, Gueye was giving them no room in the middle of it. Distributing well when in possession and harassing Madrid players when they retrieved the ball, the ex-​Everton man was faultless.

​Dani Parejo (RCM) - ​Chelsea's 1-0 loss to Valencia at Stamford Bridge came as a result of a marvellous showing from the visitors' entire starting lineup. However, it was Parejo who shone brightest for Los Ches, linking play well and grabbing an assist with a clipped free-kick to Rodrigo.

Thiago (LCM) - ​Bayern Munich are already in control of Group B courtesy of their 3-0 triumph over Red Star Belgrade at the Allianz Arena. As is usually the case, Die Roten's creativity flowed from Thiago, who maintained the tempo in midfield and carved out opportunities for teammates at will. 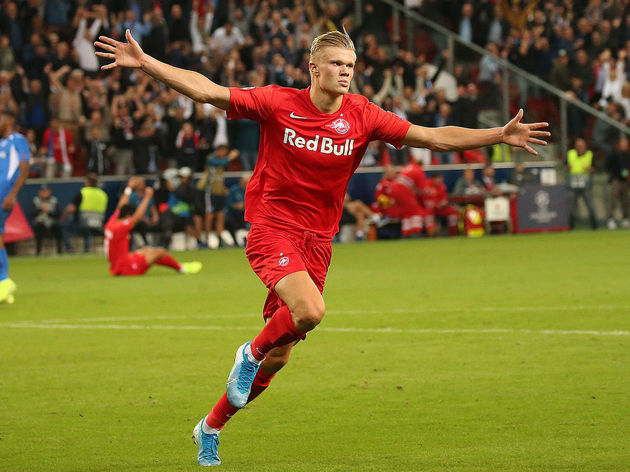 Mislav Orsic (RW) - ​Champions League newcomers Atalanta were handed a 4-0 drubbing away to Dinamo Zagreb, Croatian winger Orsic hitting a fine hat-trick as his team won the battle of the minnows.

Angel Di Maria (LW) - Real allegedly sold Di Maria because he was too ugly. Well, he came back to haunt them with two beautiful goals, following up his devastating opener with a pinpoint rifle into the bottom corner.

Erling Haland (ST) - Despite collecting a treble, Orsic has had to take a backseat. Fellow three-goal hero Haland has sent shockwaves across Europe with his display in RB Salzburg's 6-2 destruction of Genk. Imposing, classy and still developing, the sky is the limit for the 19-year-old.